Victory over Eagles would give Broncos a sweep of NFC East 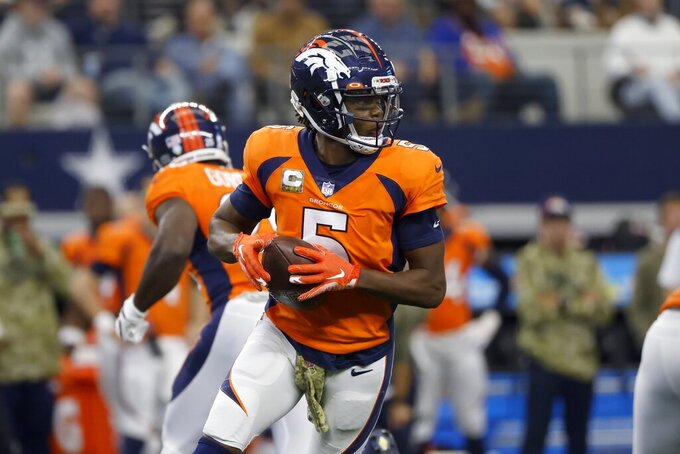 Denver Broncos quarterback Teddy Bridgewater (5) rolls out of the pocket before throwing a pass in the first half of an NFL football game against the Dallas Cowboys in Arlington, Texas, Sunday, Nov. 7, 2021. (AP Photo/Ron Jenkins) 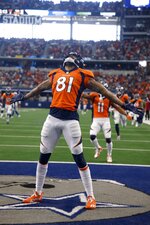 DENVER (AP) — The Denver Broncos still haven't found a way to rule the AFC West again but they can crown themselves kings of the NFC East with a win over the Philadelphia Eagles on Sunday.

Coming off a clobbering of the Cowboys in Dallas that was as comprehensive as it was confounding, the Broncos would head into their bye at 6-4 if they can take care of Jalen Hurts and an Eagles team that isn't quite as bad as its 3-6 record might imply.

Not since sweeping the NFC North in 2015 on their way to winning Super Bowl 50 have the Broncos gone 4-0 against the NFC division on their schedule.

“I think it was a big momentum boost for our next couple of games,” Denver D-lineman DeShawn Williams said of the Broncos' 30-16 win over the heavily favored Cowboys in which they held the NFL's best offense scoreless for 56 minutes.

That was their first victory over a winning team in nearly a year and only their third win since 1988 as a double-digit underdog.

“I don’t think anybody picked us to win the game because of that (6-1) record, and a lot of people said we’d never beaten a quality opponent,” Williams said. "I guess we just wanted to shut everybody up and just go out there and play our brand of ball, and I think we did that.”

Now the challenge is in replicating that.

“You have to get addicted to winning and you want more,” said Broncos coach Vic Fangio, who finally secured his signature win in his third season in Denver.

Although the Broncos ran for a season-high 190 yards last week, they might be more inclined to air it out Sunday.

Teddy Bridgewater is the third-most accurate passer in the league at 70.2% and looks to join a long list of passers who have picked apart Philadelphia's defense.

If the Eagles can't keep Bridgewater in check, the Broncos might just be breaking out the brooms Sunday.

The Eagles are 3-2 on the road, 0-4 at home. Part of the reason for their road success has been the defense’s ability to pressure opposing quarterbacks. They have 16 sacks on the road, but only one at home.

“The teams that we’ve played at home, those styles were a little bit different, those teams that came in here and played us as opposed to the teams on the road,” defensive coordinator Jonathan Gannon said, referring to playing the 49ers, Chiefs, Buccaneers and Chargers in Philadelphia.

“But we definitely have to look at that and say: ‘Hey, not just home or away, how can we be a little bit better weekly to affect the quarterback a little bit more.’”

Broncos rookie Javonte Williams is coming off his first 100-yard game, which included one of his patented carry-everybody-downfield runs, this one a 30-yard gain with an assist from guard Quinn Meinerz, who pancaked a defender at the end of the run.

“He reminds me a little bit of probably the best back I’ve been with on a team," Fangio said. “I’m not going to say he’s there yet, but Edgerrin James."

After relying heavily on passing the first seven games, the Eagles have emphasized the run game the past two weeks. They had 236 yards rushing in a 44-6 win over the Lions and 176 in a 27-24 loss to the Chargers last Sunday. Jordan Howard has led the way with 128 yards and has three of the team's six TD runs.

Howard was on the practice squad the first seven weeks and got his first opportunity to play this season because starter Miles Sanders got hurt.

“We’re getting a spark offensively from Jordan Howard,” Sirianni said. “He’s done a great job of carrying the football and being aggressive with the football, and offensive line has done a good job opening up holes for him."

GO FORTH ON FOURTH

The Broncos are an impressive 10 of 13 on fourth downs and they've limited their opponents to just 4 of 16. Dallas was 0-for-4.

“Everybody wants to go for it on fourth down, right? Fourth-and-1, fourth-and-2," Fangio said. "They cite all of the numbers and so on and so forth. But when you don’t get them, it hurts, and we were the beneficiary of the hurts.”