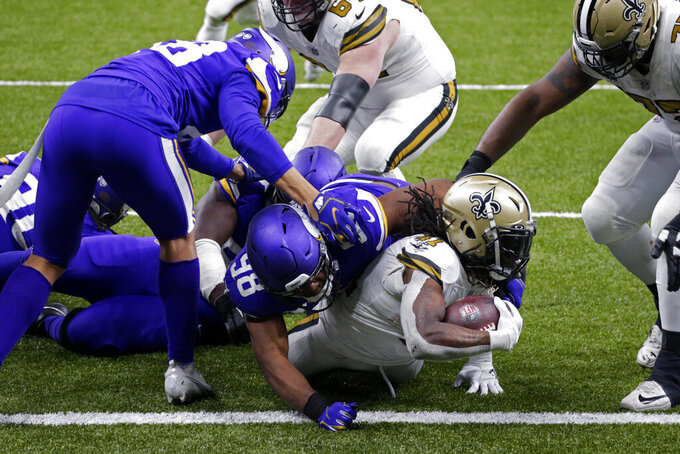 New Orleans Saints running back Alvin Kamara (41) scores his sixth touchdown of the game, tying the NFL record for most rushing touchdowns in a game, in the second half of an NFL football game against the Minnesota Vikings in New Orleans, Friday, Dec. 25, 2020. (AP Photo/Butch Dill)

NEW ORLEANS (AP) — The Minnesota Vikings’ depleted defense concluded its first series on the field by haplessly trying to chase down Alvin Kamara as the Saints running back raced away for a 40-yard touchdown.

That was just the beginning of a historically bad day for a unit that has struggled much of this season.

“We couldn’t stop the run and couldn’t get any pressure on the quarterback,” Vikings coach Mike Zimmer said. “You’ve got to work really hard to give up 52.”

Down to four available linebackers, the Vikings allowed a gaping hole as Kamara gained 11 yards on the first play after the opening kickoff. That set the tone for the game.

The Vikings (6-9) have now lost three straight and have been eliminated from the playoffs — not that they looked ready for a deep playoff run anyway.

Zimmer estimated Minnesota had lost six linebackers, three defensive linemen, three cornerbacks and a safety from the start of the year. Kamara was the primary beneficiary, but all the Saints did whatever they wanted against the cast of remaining backups, piling up 36 first downs and 583 yards. They did not face a third down in the first quarter and only two by halftime, when they led 24-14.

“It was one of those CFL games where we were converting, getting first downs on first and second down,” New Orleans coach Sean Payton said. “They’re one of the better- coached defenses and they got a lot of guys out and that can be difficult.”

“They manhandled us up front pretty well with the front guys and linebackers, but we didn’t tackle,” he said. “I don’t think being young has got anything to do with tackling.”

Minnesota hung around until the fourth quarter by intercepting Brees twice—one by cornerback Harrison Hand on an underthrown deep ball to tight end Jared Cook in the second quarter, the other by linebacker Hardy Nickerson on a pass that went through wide receiver Emmanuel Sanders’ hands early in the third quarter.

Kirk Cousins threw for 291 yards and three touchdowns, and Dalvin Cook scored a 16-yard touchdown on Minnesota’s first possession, but the Vikings needed to be perfect offensively to match the Saints.

They weren’t. After Hand’s interception, Cousins took a sack on third down. The Saints needed to drive only 46 yards after a short punt by Britton Colquitt to stretch their lead to 24-14 with 38 seconds left before halftime.

“It’s certainly disappointing any time you go three-and-out,” Cousins said. “The best-case scenario is getting points off of a turnover, but we were backed up, so we needed to get out of that field position so we could at least tip the field.”

The 52 points were the most the Vikings had given up in 57 years. The 583 yards were the most allowed in Vikings history. Zimmer labeled his defense the worst of his career.

“We have a lot of new people out there trying to come in and get the job done, fly around and make plays,” safety Anthony Harris said. “It might honestly just be guys trying hard and not focusing on the technique to get guys on the ground.”