Vikings, Chiefs both await word on whether Mahomes plays 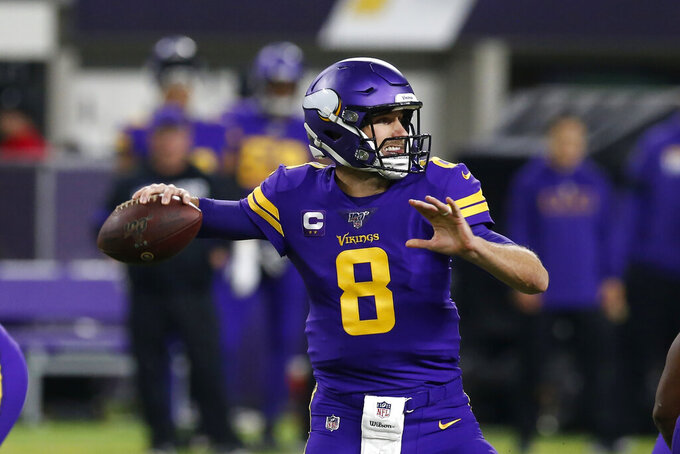 Minnesota Vikings quarterback Kirk Cousins throws a pass during the first half of an NFL football game against the Washington Redskins, Thursday, Oct. 24, 2019, in Minneapolis. (AP Photo/Jim Mone)

KANSAS CITY, Mo. (AP) — The Chiefs aren't the only ones who hope Patrick Mahomes plays against Minnesota on Sunday.

Vikings counterpart Kirk Cousins does, too.

"At the end of the day, I just want to see players healthy, out on the field. You want to play against their best," Cousins said. "You don't necessarily want free passes on anything."

Then again, Cousins isn't the one who would be tasked with slowing down the league's MVP on Sunday.

And if figuring out a way to stop Mahomes — who has been recovering from a dislocated kneecap — wasn't a big enough task for Vikings coach Mike Zimmer and his staff, the will he-or-won't he question compounds problems. Backup quarterback Matt Moore, who played well in the Chiefs' 31-24 loss to Green Bay, is different enough from Mahomes that they require significant tweaks to the game plan.

There is no question who will be under center for Minnesota (6-2) when it travels to Arrowhead Stadium for the first time since 2011 and tries to pull off what the Packers did a week ago.

After hearing plenty of doubters, Cousins has been on a tear the past four weeks, putting up a rating of 137.1 that leads the league. He also leads the NFL in yards-per attempt.

It helps his cause to have running back Dalvin Cook, the league's leading rusher, and wide receiver Stefon Diggs. And he also could have Adam Thielen back on the field after the wide receiver hurt his hamstring against Detroit and was held out of last week's win over Washington.

That could be important given the potent playmakers the Chiefs also have on offense: running back LeSean McCoy, wide receiver Tyreek Hill and Sammy Watkins and tight end Travis Kelce.

They'll be ready regardless who is under center for them.

"It's hard to say they're not at the top of the list," Moore said, when asked about supporting casts he's played with over 10 years spent in Carolina and Miami. "I've played with a lot of good guys over the years, and been fortunate to have great teammates, but you can't overlook these guys."

Or count them out, even if their biggest star is sidelined another week.

"We'll see how it goes," Chiefs coach Andy Reid said. "I'm taking it day by day here. I'm going to watch them do their thing and just see how they do."

The Chiefs have lost all three games at Arrowhead Stadium this year, following a strange league-wide trend of teams struggling at home. Of course, their opponents have been two first-place teams in Indianapolis and Green Bay and a second-place team in Houston.

Those three have a combined record of 17-6 heading into this week's games.

"We know what we have to do. We know what we need to improve," Chiefs wide receiver Mecole Hardman said. "It's our domain. It's our home. We've got to get back on track here."

The Chiefs have 13 sacks for 128 yards over the past two games, and an increase in pressure dialed up by new defensive coordinator Steve Spagnuolo has been a big reason for it.

"It obviously keeps the running back in a lot," Cook said. "But we've got to identify guys and pick it up and give Kirk a chance to get the ball to these playmakers."

Zimmer and Reid have competed against each other for decades, going back to 1986 as Big Sky foes when Zimmer was defensive coordinator at Weber State and Reid was offensive line coach at Northern Arizona.

They also faced off frequently as NFC East rivals when Zimmer was defensive coordinator in Dallas and Reid the head coach in Philadelphia. More recently, they've gotten to know each other in offseason meetings as fellow members of the NFL's coaching committee.

When Reid called plays for the Eagles, they ran a pure West Coast system relying on shorter, efficient throws, but over time he has embraced a wide-open, run-pass option scheme.

"He's always been a hard guy to defend," Zimmer said. "I think he's adjusted with the times."

It's not too early to start looking at the standings, particularly for a pair of teams that are in the running for division titles, home-field advantage and first-round playoff byes.

"If you want to be a good team, you've got to beat a good team. That's what it comes down to at the end of the day," Diggs said. "That's what we prepare for, that's what we are trying to do at all times. They definitely are a contender. They've been well for the past couple of years."

One big debate in the Kansas City locker room this week was whether Hardman, who ran a 4.2-second 40-yard dash at the NFL combine, is faster than Hill, widely considered the league's fastest man.

Hardman admitted he probably would lose over 40 yards, but he thought he could win over 100.

"I'm really fast. Mecole is really fast," said Watkins, who is also a 4.3-second 40-yard guy, before breaking into a wide grin. "But Tyreek is beating all of us."