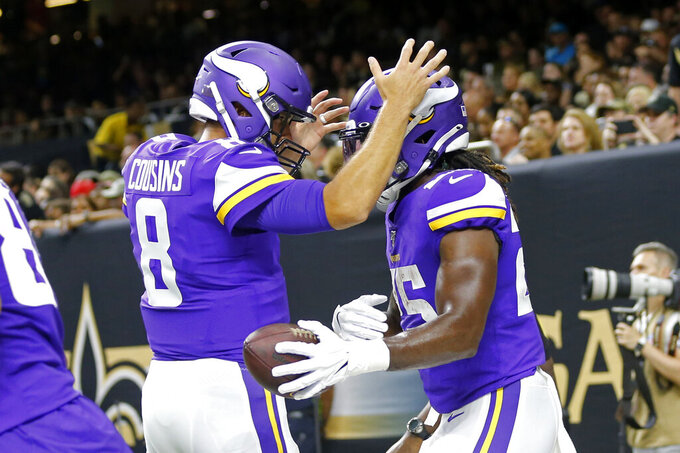 NEW ORLEANS (AP) — Kirk Cousins enjoyed his first true taste of Minnesota's new offense — both from under center and watching from the sideline.

Cousins was flawless in his lone series in Minnesota's new offensive scheme, backup Sean Mannion delivered a scoring pass under a heavy rush, and the Vikings defeated New Orleans 34-25 in the preseason opener for both clubs Friday night.

The game marked the Vikings' first test of their new offense directed by coordinator Kevin Stefanski and influenced by adviser Gary Kubiak.

"To be able to rotate that many different players in at so many different positions throughout four quarters and continue to have sustained success moving the football, I think it does say a lot about Kevin's play calling and about the system and about the execution," Cousins said. "So many guys got involved in the game and made plays."

During the one series in which the first-team offense played, Cousins drove the Vikings 81 yards for a touchdown in eight plays, completing all four passes for 65 yards. Cousins connected on a pair of short passes before finding Adam Thielen for 35 yards down the right side, setting up a 1-yard scoring pass to third-round draft choice Alexander Mattison.

Former LSU track athlete and New Orleans native Cyril Grayson Jr. had a pair of crowd-pleasing moments with his 32-yard catch down the right side from Bridgewater and his 40-yard kickoff return.

"We just wanted to take a shot," Bridgewater said. "Cyril is a guy who can run."

Each team made a coach's challenge allowed by new rules pertaining to pass interference.

Vikings coach Mike Zimmer asked officials to review whether the Saints had committed offensive pass interference after a first-down play on which no flag was thrown. The challenge was rejected.

"It was fine," Payton said. "They are going to have to see something substantial to overturn it. We're going to get used to it."

Minnesota rookie tight end Irv Smith Jr., a second-rounder out of Alabama, was making his NFL preseason debut on his 21st birthday in his hometown, where his father, Irv Smith Sr., once played tight end for the Saints. He was targeted seven times and finished with three catches for 21 yards.

Smith said he met family and close friends for dinner at the Palace Cafe, a popular downtown Creole eatery, after the team landed Thursday. While Smith couldn't resist the restaurant's renowned white chocolate bread pudding with whiskey sauce, he said he also saved room for the birthday cake his mother baked.

After the game, he swapped jerseys with Saints interior lineman Will Clapp, a former high school teammate who played at Crimson Tide rival LSU.

The top draft choice for each team last spring was a center.

"He was great. I thought he was as he'd been all through practice," Cousins said. "Great command. Really sharp. No concerns whatsoever."

The Saints, who didn't have a first-round pick, selected Erik McCoy 48th overall. He played the first several series of the game.

Saints reserve offensive tackle Ulrick John went down with an apparent lower left leg injury. He was able to walk on his own, but left the field after being examined by team medical staff.