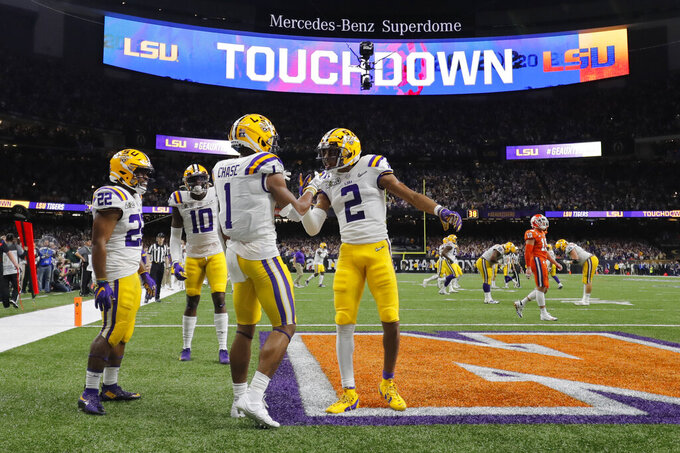 FILE - In this Jan. 13, 2020, file photo, LSU wide receiver Ja'Marr Chase (1) celebrates after scoring with wide receiver Justin Jefferson during the first half of a NCAA College Football Playoff national championship game against Clemson in New Orleans. There are more bowl games scheduled for the coming season than ever before in major college football: 42, not including the College Football Playoff championship. College football leaders are in the process of piecing together plans to attempt to play a regular season during the COVID-19 pandemic. If it is even possible, everyone anticipates there will be disruptions, added expenses and loads of stress just to get through it. (AP Photo/Gerald Herbert, File)

The Vikings announced they signed Jefferson, the wide receiver from LSU taken 22nd overall, and Gladney, the cornerback from TCU who went 31st overall, as well as 12 other picks. Seventh-round quarterback Nate Stanley of Iowa signed his contract earlier this summer. The 15 selections were the most in the NFL since the draft was shortened to seven rounds in 1994.

The 6-foot-1, 202-pound Jefferson will compete for the No. 2 wide receiver spot on the depth chart behind Adam Thielen. The 5-foot-10, 191-pound Gladney will be in line to start at cornerback with Mike Hughes.