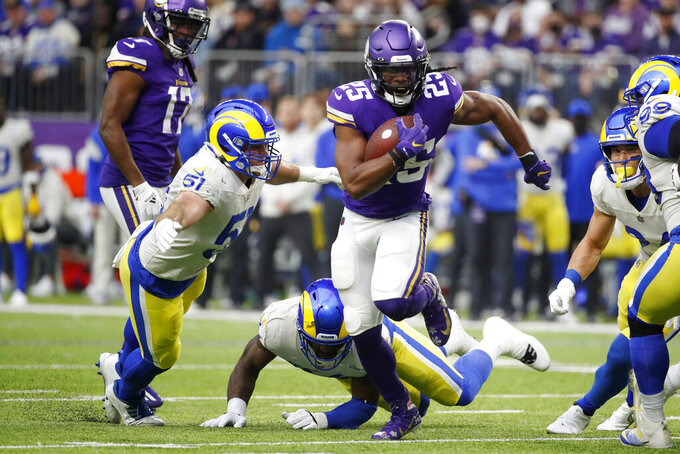 While the Green Bay Packers have dominated the NFC North lately, there’s one division opponent they’ve struggled to solve.

The Minnesota Vikings have won their last two matchups with the Packers and are the only NFC North team to beat them during Matt LaFleur’s three-year coaching tenure in Green Bay. The Vikings (7-8) will try to do it again Sunday night as they attempt to boost their playoff hopes amid potential single-digit temperatures in Green Bay.

They're going to have to try to win without their starting quarterback.

Cousins threw for 341 yards and three touchdowns without an interception when the Vikings beat the Packers 34-31 on Nov. 21.

The Vikings don’t have much margin for error. They’ll be eliminated from playoff contention Sunday if they lose at Green Bay and the Philadelphia Eagles win at Washington.

Green Bay (12-3) already has wrapped up its third straight NFC North title. The Packers will clinch the NFC’s No. 1 playoff seed and lone first-round bye if they win Sunday and the Dallas Cowboys lose or tie at home against the Arizona Cardinals.

The Packers have won four straight since falling at Minnesota on a game decided by Greg Joseph’s 29-yard field goal as time expired. The Vikings also won 28-22 at Green Bay last season, handing the Packers their only regular-season home loss of the last two years.

Cook rushed for 163 yards, caught two passes for 63 yards and scored four touchdowns in the Vikings’ victory at Lambeau Field last season. Justin Jefferson caught eight passes for 169 yards and two touchdowns against the Packers earlier this year. The Vikings will need a huge performance from one of those guys Sunday night, particularly now that receiver Adam Thielen has been placed on injured reserve.

“It’s almost like you’ve got to pick your poison,” LaFleur said. “Are you going to put more in the box to stop the run? Or are you going to try to cover Jefferson because he is, he’s proven he’s one of the best receivers in this league.”

Although it isn’t expected to snow, the forecast in Green Bay for Sunday calls for a high temperature of 12 and a low of zero.

“It’s about keeping your head and your hand warm when the weather dips below 10,” Packers quarterback Aaron Rodgers said. “I think the sweet spot where it’s not as big of a deal is probably between 32 and 10. When it gets below 10, then the ball definitely becomes a little bit slicker, but we’ve had a lot of success over the years throwing it in this type of environment.”

Rodgers says it’s important not to be “sitting on that heated bench for too long because the difference between being super-warm on the bench and being cold on the field is a little drastic.”

“Once the pads and the cleats come on and everything else, it’s not cold no more,” said Cook, who grew up in Miami and went to Florida State but has spent his entire five-year pro career in Minnesota. “It’s not none of that. I don’t know how this single-digit weather is going to be, but we’re about to find out. It’s like another milestone that I’m checking off.”

Rodgers has thrown 16 touchdown passes without an interception over his last five games despite dealing with a toe injury. This torrid five-game stretch started when he threw for 385 yards and four touchdowns in the loss at Minnesota.

The surge has put Rodgers in contention for a fourth MVP award.

“This has been one of my favorite years of football,” Rodgers said. “It’s hard to think of a year that I’ve enjoyed more than this one, even with all the adversity.”

The Vikings have the fifth-worst rate in the NFL in rushing yards allowed per game and per carry, continuing a troubling trend that began last season.

Sony Michel had a season-high 131 yards on 27 rushes in the Vikings’ 30-23 loss to the Los Angeles Rams last week. The Packers will pose another challenge with Aaron Jones and A.J. Dillon, a tandem that figures to be in heavy use with the frigid conditions.

The Packers have their own issues on run defense. Green Bay allowed Cleveland to rush for 219 yards on 25 carries in a 24-22 Christmas Day victory over the Browns.

The Packers lead the NFL with a plus-16 turnover margin after intercepting four Baker Mayfield passes last week.

Minnesota is sixth in the league at plus-9, the only team better than plus-3 with a losing record. The other teams in the NFL’s top eight in the category are a combined 71-34.

The Vikings have had a plus turnover differential in seven of 15 games, but they’re just 2-5 when that happens.

LaFleur owns a 38-9 regular-season record to tie George Seifert for the most regular-season wins of any NFL coach in his first three years. Seifert went 38-10 with the San Francisco 49ers from 1989-91.

LaFleur would overtake Seifert with a victory Sunday.