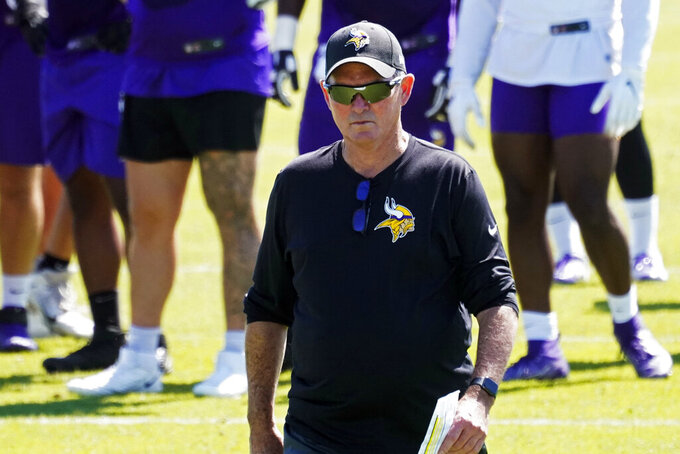 FILE - In this June 16, 2021, file photo, Minnesota Vikings head coach Mike Zimmer walks through the field during NFL football practice in Eagan, Minn. The Vikings and assistant coach Rick Dennison have found a solution for him to remain with the club despite his unvaccinated status. The 63-year-old Dennison will take a role as senior offensive advisor. He'll do all of his collaboration with the staff virtually. (AP Photo/Jim Mone, File)

EAGAN, Minn. (AP) — The Minnesota Vikings will start training camp with yet another change in leadership for their offensive line, having reassigned valued assistant coach Rick Dennison to a consulting role so he can remain employed by the club without vaccination for COVID-19.

On the day before the first full-team practice, head coach Mike Zimmer didn't appear at all worried by the disruption as he addressed reporters — exuding a demeanor as upbeat and relaxed as ever.

Zimmer sounded relieved with a solution that will allow the Vikings to continue to lean on Dennison's game-planning expertise, even if all his collaboration must come virtually. The negotiations were ongoing for the last three months, and Zimmer at one point told general manager Rick Spielman he was glad Spielman was patient — admittedly not a strong suit of Zimmer.

Phil Rauscher was promoted to lead offensive line coach after serving as Dennison's assistant last season, and Ben Steele was hired as assistant offensive coach. The running game coordinator title that Dennison also carried will be dropped for now. The Vikings announced Tuesday they reached an agreement on contract terms to make the 63-year-old Dennison a senior offensive advisor.

“They have been using the same techniques for two years,” Zimmer said. “It'd be tougher if it was a completely different system and we brought a guy in off the street that was going to change the protection calls and the run game calls and things like that, but Phil has been in the system for quite a while.”

Zimmer and Spielman both declined to divulge Dennison’s reason for not getting the COVID-19 vaccine, despite strict league-wide protocols for those without it. Zimmer said it’s possible Dennison would get it later.

“I felt like it was important that we use him as a resource, but we also give him the opportunity to continue to work,” Zimmer said.

Dennison, a long-time assistant in Denver, was hired by the Vikings in 2019. This will be his 27th year on an NFL coaching staff. For now, he’ll help the other offensive assistants evaluate players and devise game plans as in the past, but only through the computer.

The hands-on work will fall to Rauscher and Steele, who'll be responsible for an especially young group after the offseason release of left tackle Riley Reiff. Right tackle Brian O'Neill, entering his fourth year in the league, has the longest tenure with the Vikings. Rookies Christian Darrisaw and Wyatt Davis were drafted as instant starters, though their development must progress throughout the month for them to be in the season-opening lineup. Left guard Ezra Cleveland is in his second year, and center Garrett Bradbury is in his third season.

Rauscher will begin his seventh season in NFL coaching, having spent time previously in Washington and three with Denver. Rauscher will also be the sixth offensive line coach in eight years under Zimmer.

“He’s got a great feel for what we’ve been trying to do in the run game: the calls, the steps, the footwork, the hand placement. Phil is a very aggressive, boisterous I guess is the word for it, coach that will push these guys,” Zimmer said.

Steele will start his eighth season as a coach in the league and his 14th overall. He was the tight ends coach for Atlanta last year. As a player, Steele was in training camp with the Vikings in 2003 and 2004 and appeared in 17 games for Green Bay over the 2004 and 2005 seasons.

As for the current players, the Vikings declined to publicize their vaccination rate. NFL Network reported Tuesday that 85% of players in the league have received at least one dose of the vaccine. Zimmer pointed to the rise in cases in several parts of the country this summer due to the delta variant as he urged anew the benefit to all — players and fans alike — of getting the shot.

Unvaccinated players can be on the field with their teammates, but they'll be largely subject to last year's COVID-19 protocols with continual testing, virtual meetings and other safeguards.

As for non-virus-related health issues, Darrisaw is one player who won't be at full speed or full activity at the beginning of camp. He's recovering from a groin injury that limited his on-field work during spring practices. Defensive tackle Michael Pierce is also dealing with a calf injury, and Zimmer said, “We'll just see when he's ready to go.”

Another defensive tackle, rookie Jalen Twyman, was headed for the reserve/non-football injury list as he continues his recovery from four gunshot wounds last month.

“We’ll just take our time with him and go from there,” Zimmer said.