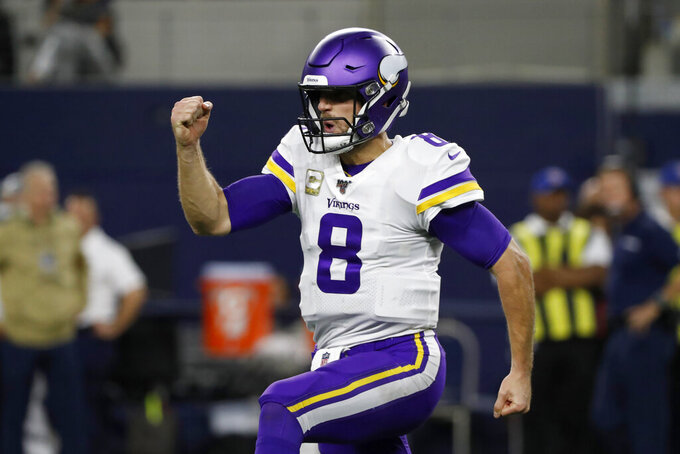 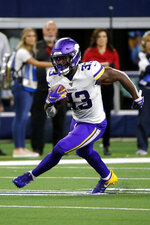 EAGAN, Minn. (AP) — Kirk Cousins and the Minnesota Vikings delivered a clutch performance in the type of setting, coincidental or not, that has dogged them for years.

With a victory on the road in a nationally televised night game against a winning team, they've set themselves up quite well for the rest of the season.

"I think I've played well in prime time. Have we won them all? No, but to get this one was a great step in the right direction," Cousins said after the Vikings defeated Dallas 28-24 on Sunday. "Hopefully we can get a few more here."

After going 0-9-1 in their last 10 games on the road against teams that had a winning record at the time of the game, the Vikings put those pesky questions to rest for the time being. They did so by again relying on what they were determined to make their strength this year, an efficient, powerful rushing attack spearheaded by Dalvin Cook. The only deficit the Vikings faced against the Cowboys was 21-20 midway through the third quarter, when after getting the ball back they drove 75 yards in 13 plays for the go-ahead touchdown on a fourth-and-goal run off right tackle by Cook.

"It's new to me, but I guess when you get people on their heels you get them a little bit tired, a little bit worn down," Cousins said. "You can just keep going and keep plugging, and I think it says a little bit about our conditioning."

The Vikings kept the ball on the ground for 10 straight plays leading up to the score, five for Cook, four for Alexander Mattison and one for fullback C.J. Ham.

Just as critical for the victory was the way on the other side the defense smothered Cowboys running back Ezekiel Elliott, who had just 47 yards on 20 attempts. That's the lowest total of the two-time NFL rushing champion's career in the 36 games, including the playoffs, in which he has carried the ball 20 or more times.

The way the front four handled one of the best offensive lines in the league and the absence of nose tackle Linval Joseph was remarkable, with young interior players Jaleel Johnson, Ifaedi Odenigbo and Armon Watts drawing rave reviews. Middle linebacker Eric Kendricks was a more than capable support, also contributing a crucial diving fourth-down breakup of a short pass to Elliott with 40 seconds left from the Minnesota 14-yard line.

Dallas has some of the best pass blockers in the league, so generating pressure was more difficult than usual for the Vikings. That contributed to some vulnerabilities in the secondary during an impeccable game for Cowboys quarterback Dak Prescott. Cornerback Mike Hughes was targeted most often with the primary coverage on wide receiver Amari Cooper, but coach Mike Zimmer was hardly upset.

"He was in position most of the night," Zimmer said. "Honestly, the guy made a bunch of great catches, and they made some really good throws."

The Vikings have proved the fullback is not a dying position, with Cook and Mattison reaping the benefits of Ham's ability to clear out the first defender and pave the way for repeated success on the ground. Ham was the lead blocker on six of those 10 consecutive running plays on the go-ahead touchdown drive.

There's no obvious player falling out of favor, but the injury absence of cornerback Trae Waynes against the Cowboys provided a potential glimpse at what the secondary will look like next year. Though his performance this season has not been a problem, Waynes is in the final year of his contract with this star-packed team toting precious little space under the salary cap. Hughes, the 2018 first-round draft pick, is on a clear track to be a full-time starter next season.

Zimmer said he wasn't sure yet about the status of wide receiver Adam Thielen for the upcoming game against Denver, but with the bye waiting next, the Vikings will likely take advantage of the two-for-one to give his hamstring further rest. Right guard Josh Kline was replaced in the third quarter at Dallas by Dakota Dozier because of a concussion, his second one this season. Waynes (ankle) will probably return against the Broncos. Joseph (knee) will likely be a longer-term absence, though Zimmer left open the possibility of him playing.

The Vikings must avoid a letdown against a lesser opponent when they host Denver (3-6) on Sunday afternoon, but that's rarely been an issue in six seasons under Zimmer. Keeping their injury list from lengthening will be the key, with the goal of being back to full strength for the Dec. 2 game at Seattle.