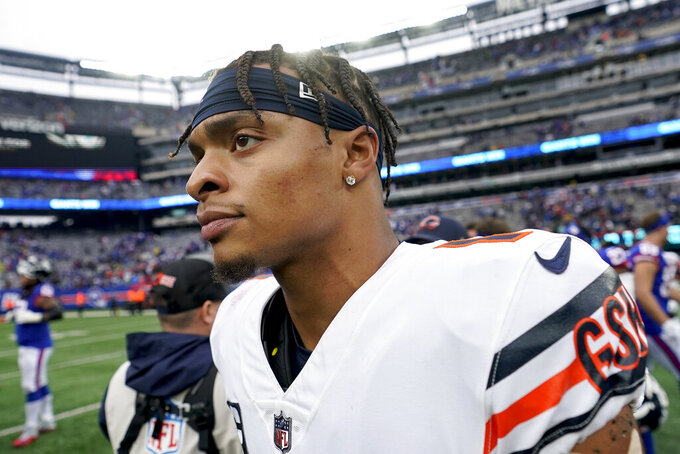 MINNEAPOLIS (AP) — The Minnesota Vikings have staked out a favorable position through the first quarter of their season by winning three of four games amid predictable growing pains with new playbooks and play callers on both sides of the ball.

Just because Kirk Cousins worked with coach Kevin O'Connell before didn't mean the offense was going to instantly click, even with Justin Jefferson, Adam Thielen and Dalvin Cook at its disposal.

“You have to turn over every stone as best as you can no matter how little time we’ve had on the task, so there’s no excuse,” Cousins said. “Now that being said, after 40 games are you going to be at a different level of this offense? Yes, you will."

O'Connell was the position coach for Cousins with Washington in 2017, a former NFL quarterback himself who is just 3 years older than Cousins. Relatability is only part of the equation, though. The alignment of in-game decision-making with big-picture strategy about where and when to pass the ball is not an overnight process, particularly when the Vikings have tested the new system against few opposing defenses to date.

“I feel great about where Kirk’s headed, and obviously there’s some things we can really coach hard," O'Connell said. "I can coach better to help him be at his best and truly start maximizing what we’re going to become as an offense.”

The Vikings, who host Chicago on Sunday, are fifth in the league in first downs per game but just 15th in scoring and 25th in red-zone touchdowns. When facing pressure, as defined by Sportradar, Cousins (8 for 35 for 87 yards with two interceptions) is 30th in the NFL in completion percentage among qualifying quarterbacks.

The Bears, who are 2-2, have been experiencing even more pronounced growing pains.

They're second-to-last in the league in scoring in quarterback Justin Fields' second season, the first under new coach Matt Eberflus and offensive coordinator Luke Getsy. Fields (4 for 19 for 117 yards with two interceptions) is 31st in the NFL in completion percentage under pressure. He has been sacked 16 times, one short of the league high.

Leaning on his running ability and feeling the rush in the pocket, Fields sometimes has missed open receivers and taken off instead.

“You’re not going to make the perfect decision every time,” Fields said. “You’ve just got to live by that and just move on to the next play.”

Said Eberflus: “More experience on the job, and he’s going to get better at it.”

Vikings left tackle Christian Darrisaw has been blossoming in his second season. He'll face a dangerous defensive end in Robert Quinn, who has 3 1/2 sacks and two forced fumbles in his last three games against Minnesota.

“From a pass game perspective, I feel like last year that was one of my weaknesses,” Darrisaw said. “I really took it hard on myself, breaking down my film and watching my footwork and things like that, just trying to break bad habits that I had in college and the type of stuff that I used to get away with. Now you get exposed on those types of things.”

He was exposed on the team flight to London last week for the game against the Saints. The lay-flat seats that Vikings players had to rest well and keep their body clocks on track worked so well the 6-foot-5, 315-pound Darrisaw started snoring — loudly.

Outside linebacker Za’Darius Smith thought the plane was making the noise. Cook thought it was a prank.

“He was sawing logs,” Cousins said.

On the return trip, Darrisaw slept on his side instead of his back — and made his teammates happy.

The Bears were torched by Saquon Barkley for 146 rushing yards last week against the Giants and are allowing a league-worst 183.3 rushing yards per game.

“If you can’t stop the run, then it’s kind of demoralizing," Quinn said.

The offense's lack of production could be plenty discouraging, too, but the leaders of the defense have been trying to prevent that.

“Pressure does two things: It can bust pipes and make diamonds,” Quinn said. "I think we’re just trying to make diamonds of the situation and not trying to point fingers.”

Minnesota's Greg Joseph was named NFC special teams player of the week after making all five of his field-goal attempts, including the tiebreaking 47-yarder with 24 seconds left. He's the only one in the league this season with five-plus makes.

“It’s a team award,” Joseph said. “Credit to Kirk and the offense for getting us down there. Credit to the big boys up front helping me make kicks and the snap and the hold.”

Chicago's Cairo Santos will be back this week after missing the last game because of a personal matter. Michael Badgley went 4 for 4 on field goals in his place.

The Bears have a significant number of recent former Vikings. Defensive tackle Armon Watts, who got his first start of the season last week, was cut in late August along with wide receiver Ihmir Smith-Marsette and practice squad cornerback Harrison Hand. Guard Dakota Dozier, who is on injured reserve, was also with the Vikings as late as 2021. So was quarterbacks coach Andrew Janocko. Backup tackle Riley Reiff started for the Vikings from 2017-20.