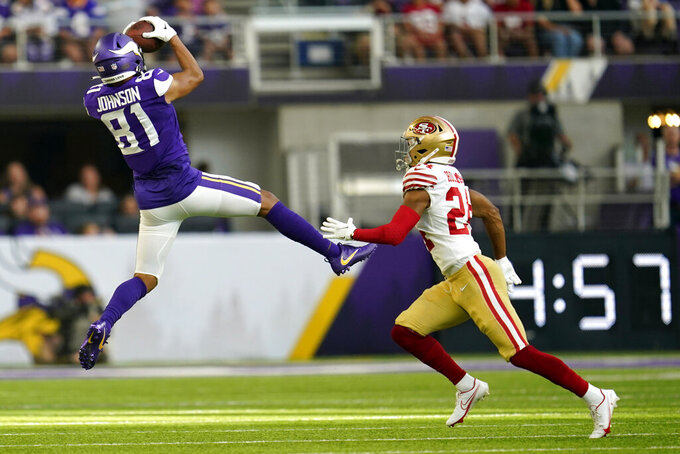 Johnson was placed on injured reserve on Monday, one day before the NFL's deadline for reducing rosters to the 53-player limit for the regular season. The fourth-year player was hurt in the team's final preseason game at Denver on Saturday, after which coach Kevin O'Connell confirmed the injury was serious.

Johnson suffered a torn ACL during training camp last year. He was firmly in the mix for a backup spot behind Justin Jefferson, Adam Thielen and K.J. Osborn. Drafted in the seventh round in 2019 out of Colorado State, Johnson had 31 catches for 294 yards and three touchdowns as a rookie.

The Vikings also placed defensive lineman T.Y. McGill on injured reserve, after the veteran hurt his ankle in the last preseason game. McGill had 3 1/2 sacks over the three exhibition games, the second-most in the league this preseason.

By landing on injured reserve before the roster cutdown, Johnson and McGill are not eligible to return to the active roster in 2022.