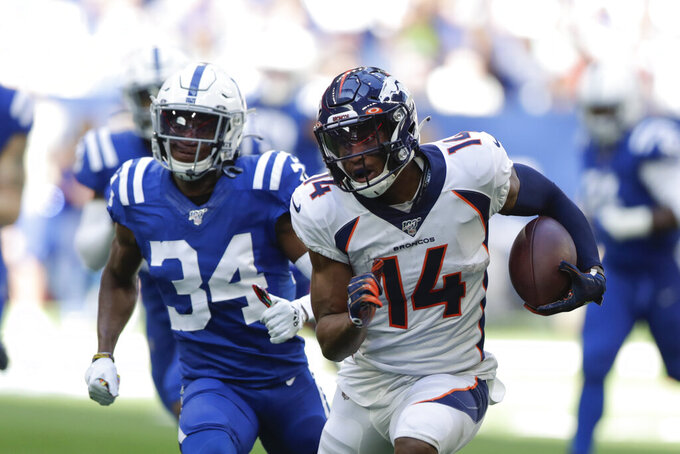 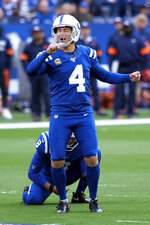 INDIANAPOLIS (AP) — Indianapolis Colts coach Frank Reich was so confident in Adam Vinatieri, he opted to play for a long field goal Sunday.

Even after the NFL's career scoring leader opened the game by missing a 45-yard field goal wide right. Even after the league's best clutch kicker missed the tying extra point in the third quarter.

Eventually, Vinatieri rewarded Reich's faith. In his 200th career game with the Colts, Vinatieri made a 51-yard field goal with 22 seconds left to give Indy a 15-13 come-from-behind victory over the Denver Broncos.

"I knew we were inside Vinny's range," Reich said. "I knew that was money for Adam. I knew that."

For most of Vinatieri's first 23 seasons, every coach in the league would have agreed with Reich's statement.

This season has made some wonder about Vinatieri's reliability. He missed five of eight kicks in the first two weeks before seemingly settling with only one miss — a long field goal — in Indy's next four games.

Then came the two misses Sunday and suddenly everyone outside the Colts' organization held their collective breath when Reich called two runs from just inside the Broncos 35 in the final 73 seconds. But Vinatieri delivered by again living up to his reputation.

"Honestly, you have to have a short memory, good or bad," he said. "I guess for me, the only thing I try to think about is my fundamentals and what I need to do right there at that moment and try not to think about the situation in the game and what it means. I just try to focus in on my little world."

The final kick gave Indy (5-2) a third straight win and kept it atop the AFC South.

Meanwhile, in Denver, it was another wrenching blow. The Broncos (2-6) lost their second straight overall and their third this season in the final 30 seconds.

And now there appears to be questions from inside the locker room about playing too cautiously.

Flacco did what he could, but Denver settled for two short, first-half field goals — one capping a 17-play drive that consumed nearly eight minutes, the other to finish a 13-play drive that took another 5½ minutes.

Vinatieri made it 6-3 at the half with a 55-yard field goal.

After the Broncos opened the second half with a 4-yard TD run from Royce Freeman , Vinatieri made a 45-yard field goal and Marlon Mack's 10-yard TD run made it 13-12. That's the way it stayed — until Vinatieri took advantage of his final shot.

"It wasn't a perfect day, but he made two big kicks," Reich said before explaining why he's so confident. "It's 100% track record — and talking to him every day. You look the guy in the eye and you know he's the best of all-time."

Broncos: Flacco was 20 of 32 with 174 yards. ... Phillip Lindsay carried the ball 14 times for 59 yards while Freeman ran 12 times for 40 yards. ... Courtland Sutton had three receptions for 76 yards, and Noah Fant had five catches for 26 yards. ... Denver wound up with 279 total yards and was called for 10 penalties including a personal foul call on the Colts' final drive, which took the ball to the Broncos 34. ... Denver's streak of not allowing a touchdown inside the red zone ended at 10.

Broncos: Right tackle Ja'Wuan James left in the first half with what appeared to be an injured right knee. He limped to the sideline, was carted to the locker room and did not return. Left guard Dalton Risner hurt his ankle, but did return.

Colts: Rookie safety Khari Willis was ruled out after hurting his foot in the third quarter.