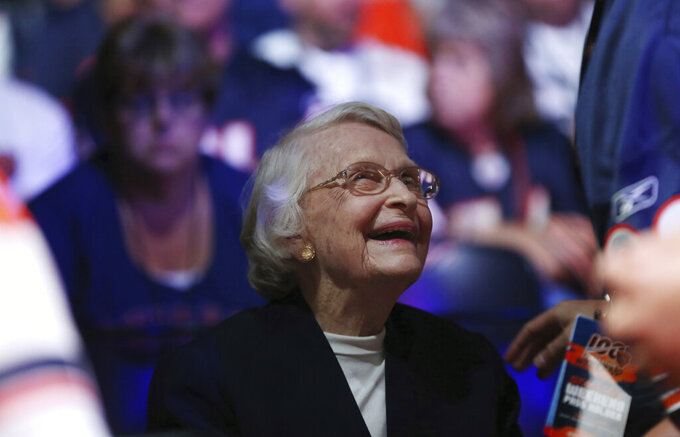 ROSEMONT, Ill. (AP) — There were times when George Halas was so strapped for cash that he had to borrow from his kids to help keep the Chicago Bears going.

The Bears were struggling to stay afloat in the late 1920s and early 1930s, so much so that Halas, the founder of the franchise, had to turn to his children. He did that just to pay the family's groceries and rent.

"I often use the word survival because of what was involved," McCaskey said. "Fortunately, for us and for so many people now, it all worked out."

McCaskey mentioned her dad, Halas, holding part-ownership in a commercial laundry company, working in real estate and selling cars as he tried to keep his other businesses going.

The Bears and the NFL both have come a long way since then.

The Bears held their 100th anniversary celebration over the weekend in what was billed as the franchise's largest gathering of stars past and present.

Stars such as Mike Ditka, Dick Butkus, Mike Singletary and Dan Hampton were on hand this weekend. Even Gale Sayers, weakened by dementia, made the 130-mile trip from his home in Indiana to attend the opening ceremonies on Friday night, getting a rousing ovation in an emotional moment.

"This weekend has been like a happy dream that keeps going on and on," McCaskey, the 96-year-old team matriarch, said Sunday.

She recalled the tough times after the Great Depression hit, with her father working various jobs and even borrowing from his children just so the family could eat and keep a roof over their head. Their money was in savings accounts established by Grandma Halas, who would send birthday and Christmas checks each year.

When she sees the gleaming, expanded suburban headquarters that bears her father's name, it's almost difficult to believe how far the franchise has come.

"It's hard to imagine these days with all the millions and millions of dollars that people are talking about," McCaskey said. "Each time I go up there, I think, 'Does this really belong to us? Is this really part of our organization?'"

McCaskey touched on a wide range of topics, from the history of the franchise and the NFL and her father's legacy to the current state of the team.

Though she was too young to remember it, she was around when the Bears signed Red Grange out of the University of Illinois in 1925 and embarked on a 19-game barnstorming tour that helped legitimize the struggling NFL. She saw the "Monsters of the Midway" re-establish themselves last season, winning the NFC North at 12-4 in fun-loving coach Matt Nagy's first season. And she has witnessed just about everything in between.

She was asked what her favorite game was when the Bears played at Wrigley Field. That would be a 14-10 victory over the New York Giants in the 1963 NFL championship game.

The Bears intercepted Y.A. Tittle five times on the way to their sixth and final title with Halas as their coach. Chicago has won it all just one time since then, when the 1985 team shuffled its way to the Super Bowl and the ninth championship in franchise history.

"Even though it wasn't against the Packers, it was the culmination of a championship season and my dad's final championship," McCaskey said. "We had beaten the Packers previously in Green Bay and in Wrigley Field that season."

McCaskey also talked about the 1985 team, one of the greatest in NFL history. The Bears went 15-1, the lone loss coming on a Monday night at Miami in early December after Chicago outscored Dallas and Atlanta a combined 80-0 the previous two games.

"That was a very unusual team and a very unusual season because so much of the normal stress of game days seemed to be disappearing," she said. "We could go to the game and not be completely knotted up inside. There was so much confidence in everyone. Except for the game at Miami, everything turned out very well."

As for Nagy, McCaskey is a fan.

He helped set the tone as the Bears returned to the playoffs for the first time since the 2010 season. He won more games than any other rookie coach in franchise history, and he did it with an approach the city and team embraced. He ran trick plays with fun names and turned the locker room into a nightclub — "Club Dub" — after victories.

"My dad, George Halas, certainly celebrated every championship," McCaskey said. "But all through the season, it was very serious work and very concentrated situations. There are pictures of him in the locker room after the various championships and I love them. But our present day coach has made each game and each week a possible celebration. And I think that is a very excellent difference. The season is so much longer, it's so much harder to get to the final game and win the final game. But we're hoping for a lot of those 'Club Dub.'"