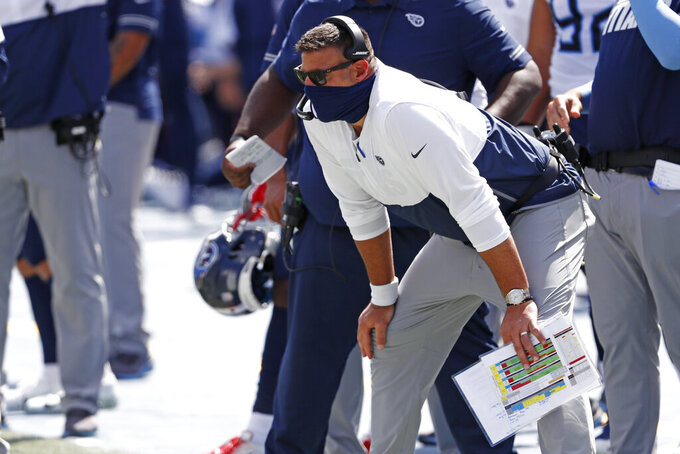 NASHVILLE, Tenn. (AP) — Coach Mike Vrabel says the Tennessee Titans stand by how they've followed the NFL's protocols for the coronavirus pandemic and hope the league will allow the team back inside the building Wednesday.

The NFL's first team to deal with a COVID-19 outbreak has had a couple of what Vrabel called “really good days” with testing, and the coach said they're hoping for more good news early Wednesday.

“And then we'll kind of see where we're at with the league and hopeful to return and get back in the building,” Vrabel said.

One positive test could derail that timeline.

If allowed back inside the team's headquarters Wednesday, that would keep the Titans (3-0) on target to host Buffalo (4-0) on Sunday in a matchup of two of the NFL's six remaining undefeated teams. Vrabel says he's working through a variety of schedules to be ready for when they can get back.

The NFL and its players union had people in Nashville meeting with the Titans to review how the team handled the outbreak and checking protocols. The Titans, and any other team with an outbreak or exposed to a team with an outbreak, now have new protocols to follow including all meetings held virtually and everyone must wear face coverings and gloves at practice.

Vrabel said the Titans followed the protocols that were in place and that both he and general manager Jon Robinson put a lot of thought into doing just that.

“We're going to continue to do everything that we can to make sure as we enter back in this building, that things are safe and the players are comfortable and that their health and well-being is at the forefront,” Vrabel said.

Vrabel said those players have to follow a protocol to be cleared to return to play, keeping them out of Sunday's game with the Bills. But Vrabel is hopeful they’ll get most of the personnel affected back, and any coaches still not cleared to return won’t have a role in the game.

The Titans, who've won all three games by a combined six points and a made field goal inside the final two minutes of each victory, will need a long snapper. Vrabel said he and Robinson have been working through that. The NFL has extended the time teams need to bring in players for tryouts.

“I am pretty certain that they’ll allow us to have somebody in here that can snap for us,” Vrabel said. "We understand that that’s a critically important spot. Still working through some of that stuff with the league.”

The NFL and the players' union agreed to expanded practice squads this season, and Vrabel said they'll have enough players to make up for those who won't be able to play.

Replacing Jones and Simmons in the middle of the defensive line won't be easy, and Vrabel said defensive backs will have to help fill in for receivers once they practice with Adam Humphries and Cameron Batson both on the reserve/COVID-19 list.

Tennessee already has had its game against Pittsburgh moved from Oct. 4 to Oct. 25 because of this outbreak, turning the missed date into an unexpected bye.

Vrabel dismissed any talk of the Titans having a competitive disadvantage.

“The only competitive disadvantage in my mind is not playing very well, and so that will all be determined on Sunday," Vrabel said.

The Bills certainly aren't worried about not knowing if Sunday's game will happen as scheduled.

The Titans' outbreak also affected the Baltimore Ravens, who now will have a bye Week 7 instead of playing Pittsburgh. That game now will be Nov. 1.

The NFL also had to move New England’s game at Kansas City from Sunday to Monday night after Patriots quarterback Cam Newton tested positive for COVID-19, as did a Chiefs practice squad player.

The NFL and the players union agreed Oct. 2 to continue daily testing, and they both agreed to ramp up health and safety procedures in the wake of the Titans' outbreak. That includes a longer process to try out free agents and a league-wide video monitoring system.

Commissioner Roger Goodell s ent a memo to all 32 teams Monday noting the league has disciplined violators of NFL protocols and that penalties including potential forfeits of games for violations forcing schedule changes.