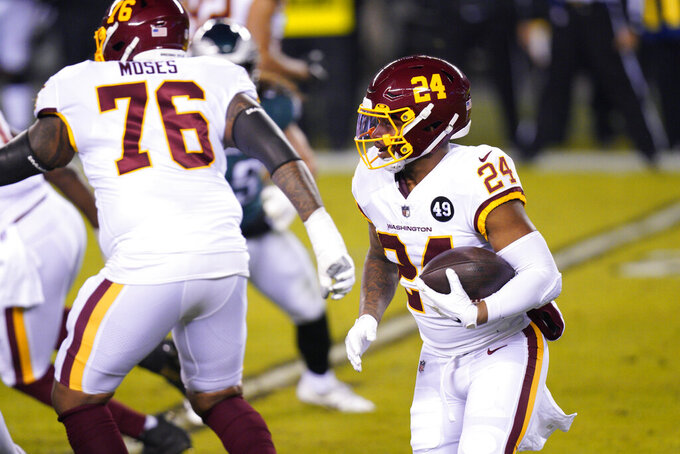 Washington Football Team's Antonio Gibson rushes during the first half of an NFL football game against the Philadelphia Eagles, Sunday, Jan. 3, 2021, in Philadelphia. (AP Photo/Chris Szagola)

Ron Rivera and Washington embraced a “Why not us?” mentality in exceeding expectations to win the NFC East.

After losing a close playoff game to Tom Brady and Tampa Bay, there's plenty of hope for a franchise that hasn't had much in a while. There's also a different question facing Washington going into next season: Who's the quarterback?

Kyle Allen was Rivera’s first choice after moving on from 2019 first-round pick Dwayne Haskins, Alex Smith led the turnaround from 2-7 to the playoffs and Taylor Heinicke impressed Saturday night against the Buccaneers. Rivera wouldn't tip his hand, saying he'd need to first meet with owner Dan Snyder to debrief this 7-9 season.

“From that point on, we’ll start the evaluation process of our football team,” Rivera said Sunday. “Obviously, the quarterback situation will be one of the topics of conversation.”

Smith, 36, is under contract for two more seasons and has to be considered the frontrunner if he wants to keep playing. He completed a remarkable comeback from a broken right leg that required 17 surgeries to repair but ended the season out of uniform because of a strained right calf in the same leg.

“It’s not the way you want to finish out the season, so in that sense, it’s frustrating,” Smith said. “Bigger picture to be back, playing a role and even to be in this situation is something that if you had presented that to me a year ago, two years ago, obviously I would have jumped at.”

Smith added he'd take a few weeks to talk to his family and make a decision. Allen, whose season was cut short by a dislocated left ankle, should return regardless given his familiarity with Rivera and offensive coordinator Scott Turner's system.

Heinicke is the wild card. He's 27 after bouncing around the NFL for years and being out of football before Washington called him in December to be “quarantine quarterback," but he was 26 of 44 for 306 yards passing and rushed for 46 yards and a highlight-reel touchdown in his first postseason start.

“Hopefully I deserve to be in this league a little longer,” Heinicke said. "I want to be in the NFL. I want to keep playing ball. It’s a dream of mine and keep working towards it.”

Washington, which has the 19th pick, could also draft and develop a quarterback after Haskins clearly wasn't a fit under the new regime.

WHAT'S IN A NAME

One full season known only as the “Washington Football Team” might not be it. Team president Jason Wright has alluded to that sticking for 2021, which is in line with the expected 12-18 month timeframe to rebrand with a new name.

No. 2 pick Chase Young lived up to the hype by leading all rookies with 7 1/2 sacks and should be an anchor of Washington's defense for years to come. That unit, mediocre at best in the seasons before Young's arrival, ranked second in the league in large part because of a fearsome pass rush.

With Young and fellow first-round picks Montez Sweat, Daron Payne and Jonathan Allen along the line, Cole Holcomb at linebacker and Kendall Fuller at cornerback, the building blocks are there for a strong defense for years to come.

“We can get crazy, Young said. “This is just the beginning with coach Rivera and (defensive coordinator Jack) Del Rio. I think it’s going to be scary for the years to come. We’re not letting our foot off the gas.”

Right guard Brandon Scherff had an All-Pro season, his first in the NFL, and became the franchise's first with that honor since punter Matt Turk in 1996. He also played 2020 on the franchise tag making his future uncertain.

Right tackle Morgan Moses told Scherff in the locker room after the loss to Tampa Bay, “That’s not the last game I ever play with you.” Scherff responded he hoped it wasn't, either, and told reporters the next morning he'd be open to re-signing for the long term.

“I love it here,” Scherff said. “I’m just looking forward to the offseason and hopefully I can sign my name to stay here.”

The organization's longest-tenured player, Ryan Kerrigan, spent a few extra minutes outside at FedEx Field on Saturday night soaking in the aftermath of what's likely his final game in burgundy and gold. He's a pending free agent who turns 33 before next season and was shuffled to a reserve role throughout the season.

Kerrigan wants to be a starter, which won't happen in Washington.

“I definitely feel like I still got a lot a lot of ball in me, a lot of good, productive years ahead of me,” he said. “I definitely see myself in a in a big role: making a lot of plays and doing what I’ve done my whole career.”

A young, stacked defense isn't the only reason for optimism. The offense, which already found a No. 1 receiver in 2019 third-round pick Terry McLaurin, has a feature back of the present and future in Antonio Gibson.

Taken in the third round after being a receiver at Memphis with the aim of making him a running back, Gibson ran for 11 touchdowns before a toe injury derailed his rookie year.

"I think it went very well for somebody who only had three carries in college." Gibson said. “I improved every week, took the coaching in, week in and week out. Still wasn’t the best, still got a lot to improve on.”