Washington looking for first win at Buffalo since 1987 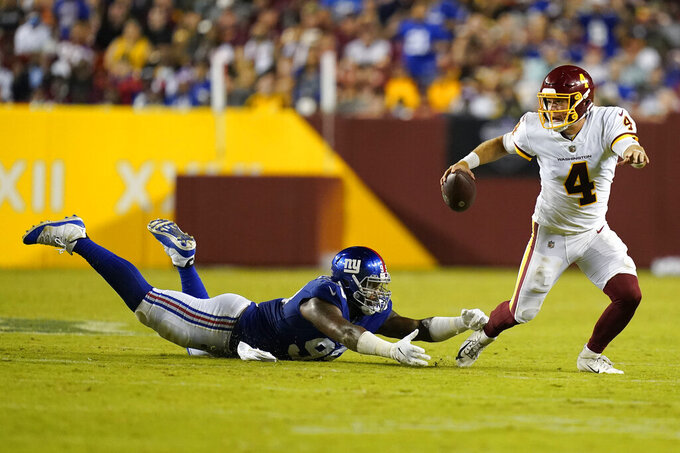 OPENING LINE: Buffalo by 9 1/2, according to FanDuel SportsBook.

TURNOVER DIFFERENTIAL: Bills even; Washington even.

WASHINGTON PLAYER TO WATCH: LB Jamin Davis. The first-round pick who has not been his playmaking self yet while slowly adapting to the pro game gets a chance to balance run and pass responsibilities against Buffalo QB Josh Allen.

BILLS PLAYER TO WATCH: Allen, more with his legs than his throwing arm. Washington struggled to contain Giants QB Daniel Jones on the ground last week, and Allen will have the chance to add to his season total of 79 rushing yards.

KEY INJURIES: Washington DT Matt Ioannidis suffered a knee injury against the Giants, and RB Antonio Gibson is expected to play despite a banged-up left shoulder. ... Bills DT Star Lotulelei now has a groin injury after missing the season opener with a calf problem.

SERIES NOTES: The Bills have won seven of the past eight meetings. Washington's only victory during that stretch came in 2015 at home. ... Before that, the last time Washington beat Buffalo was the Super Bowl following the 1991 season. That was the second of four consecutive Super Bowl losses for the Bills and Washington's most recent championship. ... Washington has not won at Buffalo since 1987.

STATS AND STUFF: Bills coach Sean McDermott faces Washington’s Ron Rivera, who hired him as defensive coordinator in Carolina. ... Rivera and Buffalo defensive coordinator Leslie Frazier were teammates with the Chicago Bears for two seasons in the mid-1980s. ... Heinicke is making his second consecutive start after replacing injured veteran Ryan Fitzpatrick in Washington's season opener. ... Heinicke was 34 of 46 for 336 yards, two touchdowns and an interception against the Giants. ... Counting the playoffs, Heinicke's 93 completions are the most of any player through his first three NFL starts. ... RB Jarret Patterson returns to Western New York after a star-studded career at the University at Buffalo. Patterson made the team as an undrafted free agent and has rushed twice for 9 yards so far this season. ... McLaurin had a career-high 11 receptions in Week 2 and finished with 107 yards and a TD catch. ... DT Jonathan Allen is coming off his fourth career game with two sacks. ... Josh Allen threw for 179 yards and two TDs and rushed for 35 yards in Buffalo's blowout of Miami last week. ... RB Zack Moss tied a career high with two rushing TDs against the Dolphins. ... 2020 All-Pro WR Stefon Diggs has averaged 128.3 yards receiving against Washington. ... The Bills have not allowed their opponents to score in the first half so far this season, the franchise's first two-game streak in that department since 1999. ... DE Gregory Rousseau is tied for the lead among rookies with two sacks. ... White led Buffalo with nine tackles last week. ... CB Taron Johnson against the Dolphins became just the fifth Bills player since 1999 to make a sack a forced fumble and two passes defensed in a game.

FANTASY TIP: Buffalo's defense is already the envy of fantasy owners relying on other teams, and that unit could be in for another big performance. But don't count out Washington after a rough start. From Chase Young and Montez Sweat to the secondary, there's too much talent on Washington's defense to continue struggling like this.