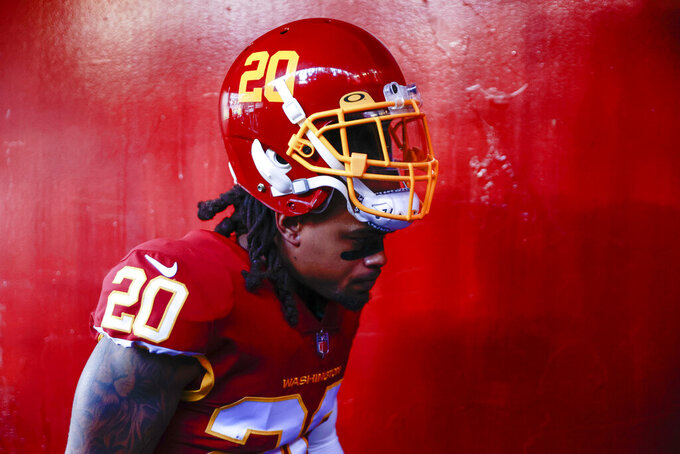 A year after looking like Washington's rebuild was on the fast track, the team is on the outside of the playoffs looking in for a fifth time in six seasons.

At 7-10 after a four-game skid followed a four-game winning streak, coach Ron Rivera's group is closer to where he thought it would be after two seasons on the job. Winning the weak NFC East in 2020 at 7-9 pushed Washington's bar too high too fast, delivered one of the NFL's most difficult schedules and brought the perception of where the team is heading back down to earth.

“I think we outdid the expectations our first year,” Rivera said. “Believe me, I didn’t come here thinking that it’s gonna be an easy turnaround, those first two years are gonna be great — no.”

This year turned out especially not so great, with injuries and virus absences contributing to the losing streak. Off-field tragedies also added up late in the season: Safety Deshazor Everett was the driver in a crash that killed his girlfriend, and pass rusher Montez Sweat's brother was killed in a shooting.

Those incidents were part of the “real life” problems that crept up for Washington late in the season. On the field, the team lost reigning Defensive Rookie of the Year Chase Young to a season-ending torn ACL and were missing dozens of regulars— including projected starting quarterback Ryan Fitzpatrick, who injured his right hip in Week 1.

Taylor Heinicke assumed the top role the rest of the season, completing 65% of his passes for 3,419 yards, 20 touchdowns and 15 interceptions.

“When you go through a season like we did, it’s been a roller coaster: a lot of adversity and a lot of hard work and fighting with these guys,” Heinicke said Monday. “You’re sitting there at your locker and there’s a lot of ups and downs throughout the year and you kind of reminisce on those memories and it’s crazy that it’s already over.”

Heinicke's time as the de facto starter could be over, too, even if he and backup Kyle Allen are back for training camp. Finding a franchise QB is by far the No. 1 offseason priority, whether that be with the 11th pick, later in the draft or through free agency.

But after an up-and-down season, there are plenty of questions on the other side of the ball, too, where the defense did not live up to lofty expectations. Washington as a team did not, either, but Rivera expressed optimism about the direction the franchise is heading, and some of his top players are on board.

“There’s stages that you have to go through,” said defensive tackle Jonathan Allen, who set a career high with nine sacks. "We’ve been going through them and I’m excited about what the future holds. And I think we’re getting there. Obviously you want to win football games, you want to make the playoffs, but there’s no shortcut to success. And we’re going to get there.”

Young's second pro season ended Nov. 14 when he tore the ACL in his right knee against Tampa Bay. He was in the midst of something of a sophomore slump with 1½ sacks through his first eight-plus games, and now the 2020 No. 2 pick has to work back from major surgery.

With Young, Allen, Sweat and Daron Payne back along with Matt Ioannidis and others, the defensive line still has the potential to be a difference-making position in 2022.

“It’s unfortunately the nature of the game,” Rivera said. “Those are things that happen and you can’t always predict what’s going to happen. You can’t predict that one, two or three of them are gonna get hurt.”

Washington's best signings turned out to be offensive tackles Charles Leno and Cornelius Lucas, receivers DeAndre Carter and Adam Humphries, and safety Bobby McCain. Leno has already been signed to an extension, but there's less certainty about the others returning.

After playing a second consecutive season on the franchise tag, starting right guard Brandon Scherff again faces an uncertain future with Washington. Another tag would come at a cost of at least $26 million, so the 2020 All-Pro is likely gone unless his camp and the team can agree on a long-term contract.

“I’d love to be here, and I hope I can end my career here,” said Scherff, who was again tight-lipped about what that would take. "“Honestly, I couldn’t tell you. It’s between my agent and here, so I’m just worried about playing football and doing what I can to help this team win.”

Washington needs a quarterback and has roughly $60 million in salary cap space to speed up the progression toward being a legitimate contender. But first a new name, which is set to be revealed Feb. 2 after two seasons as the Washington Football Team.

It won't be RedWolves — which was Payne's favorite — but punter Tress Way is a fan of three of the finalists: RedHogs, Commanders and Admirals.

“I definitely dig that Commanders vibe," Way said. "That just sounds like D.C.”