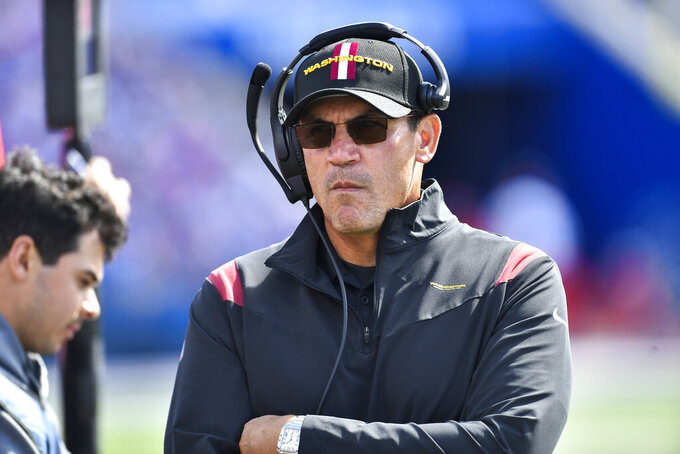 LANDOVER, Md. (AP) — The previous time Ron Rivera faced the New Orleans Saints, he was on the brink of being fired from his job and in Washington's sights to take over after the season.

Back then, Rivera was used to facing the Saints coached by Sean Payton and had plenty of experience against teams quarterbacked by Jameis Winston. Now he has to deal with both when Washington hosts New Orleans on Sunday in a matchup of teams with no shortage of concerns.

“He knows how to attack people,” Rivera said of Payton. “You have to be ready to counter when he does stuff. He’s really good at that.”

Payton's Saints are coming off an overtime loss at home to the New York Giants to fall to 2-2 while missing a handful of valuable contributors on offense. Receivers Michael Thomas and Tre’Quan Smith have been out, and New Orleans has needed to plug holes along the offensive line because of injuries.

Four games into the Winston era with Taysom Hill taking some snaps, the results are mixed. Winston has thrown for eight touchdowns with two interceptions, Hill has three rushing touchdowns and yet the Saints offense ranks 28th out of 32 teams.

Trust is still developing between Winston and Payton, who for more than a decade could put the ball in Drew Brees' hands.

“As we find more of an identity obviously, we’re going to have different things where he trusts me more in this situation than that situation,” Winston said. “Early in the season, you are always searching for how we can best function as an offense, but I think after we get a nice self-scout after this game and get into the bye, get some guys healthy back on the offensive side, I think we’ll start finding that identity."

Washington's identity was supposed to be formed around a formidable defense led by fearsome pass rusher Chase Young and three other first-round picks on the defensive line. But the unit has allowed 20, 29, 43 and 30 points a game, and Washington is 2-2 thanks to Taylor Heinicke's play leading the offense since taking over for injured starting quarterback Ryan Fitzpatrick.

Heinicke won't have top tight end Logan Thomas, who's out at least three games with a hamstring injury, the offensive line likely will be without 2020 All-Pro right guard Brandon Scherff and the receiving group is banged up, as well. With an injury list more than a dozen players long, it's also not a great time for head trainer Ryan Vermillion to be on administrative leave for what a spokesman called an ongoing criminal investigation unrelated to the team.

All that is swirling around Washington, an organization that's no stranger to controversy, and it's a test for the culture everyone from Commissioner Roger Goodell to owner Dan Snyder have said Rivera is building.

“Culture really is demonstrated in tough times,” third-year receiver Terry McLaurin said. “We have a little bit of adversity — some things that could be distractions. Do you allow them to be distractions? Injuries, do you allow them to take over the game plan and hold you back from what this offense has shown that it’s capable of? We don’t really know the answer to that right now. I think that’ll show its head on the football field.”

Winston said he’d like to get Alvin Kamara more involved in the passing game, but doing so can be challenging when defenses are keying on the dynamic Saints running back.

Winston said Kamara is his primary target on most plays, “and defenses know that. So, it’s their job to take away my best player.”

Kamara, who led the Saints with 83 receptions last season, when Brees was QB, did not have a single catch in the loss to the Giants. He still managed to produce, however, gaining 120 yards rushing on a career-high 26 carries.

“When you take away my best player (from the passing game) and he’s still getting a buck every week, that’s the best part about playing quarterback with a guy who is as versatile as him,” Winston said. “Defenses give him more (attention) in the passing game than they do in the running game. But I feel that we are doing some good things in the passing game that is going to open up him a little bit more with these weeks to come.”

Part of what has made Heinicke so effective since a surprise playoff start against Tampa Bay is his reckless abandon: a willingness to dive for the pylon or the extra yard. As Washington's full-time start in the regular season, he's picking his spots.

“It’s a very thin line,” said Heinicke, who has 87 yards rushing and a TD. “You want to get the first down, but at the same time you don’t want to take that hit and maybe be knocked out for weeks.”

Heinicke's ability to take off and run could also help Washington against New Orleans' pass rush, which did not sack Daniel Jones last week.

“We see some things on film that we’re like, ‘Hey, maybe you might have a lane here or two there,'” Heinicke said. "But it’s not something that we really put a lot of emphasis on.”

Payton is known for his use of visual aids to deliver messages. In the past, there have been wooden baseball bats left in players’ lockers before games that are expected to be physical, or gas cans left in veterans’ lockers, challenging them to prove they still have something left in the tank.

With the Saints alternating wins and losses early this season, Saints players found yo-yos in their lockers.

“I was kind of messing with it, playing some tricks, walking the dog — all that stuff,” rookie linebacker Pete Werner said. “But you got to stay consistent. You can’t go up and down and be all over the place.”

When asked about his reputed skill with a yo-yo, defensive end Cameron Jordan said: “I’m not even going to speak on that because we’re not trying to be a yo-yo type team. We’re trying to be consistent, so catch me in the offseason.”