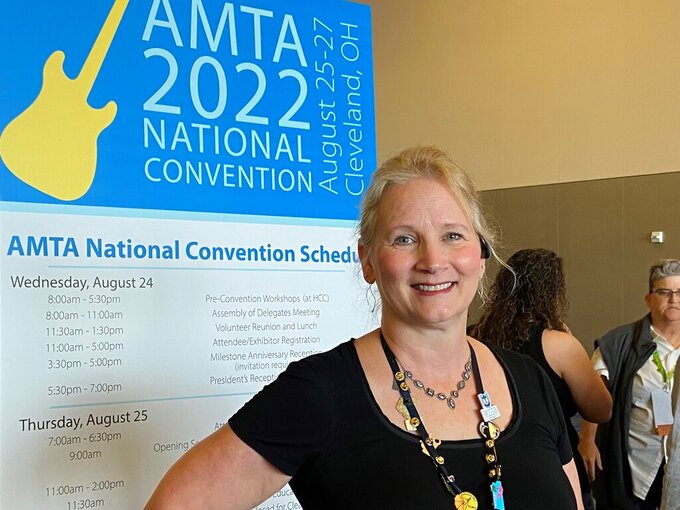 CLEVELAND (AP) — Michelle Krause still grapples with the challenge of acknowledging she's a massage therapist when she first meets someone, dreading their reaction or misguided comments even after 18 years in the profession.

“It makes you not want to share, so I didn’t,” says the 52-year-old Krause, a former firefighter who made the career change after suffering a neck injury on the job — and getting help in her recovery from massage therapy. “So I would tell people I did nutrition and finance, so that they would not want to talk to me about my work.”

Krause was among hundreds of therapists from across the country who gathered for the American Massage Therapy Association's three-day national convention, which began Thursday. It was an opportunity to talk about a job made more difficult amid the pandemic, the 2021 attack on three Atlanta-area massage businesses in which eight people were killed and the lingering stain of NFL quarterback Deshaun Watson's ongoing case that has perpetuated the sex worker stigma around the industry.

The latter is in their face each day of the conference, which is being held in Cleveland. Watson is now the quarterback for the Browns and his new workplace looms just a block from the convention center and the conference attendees' hotel across the street.

They can avoid the reminder by taking another route to the convention center — walking underground.

Not that these professionals want to hide. They didn't ask for any of this and they aren't happy about it.

The convention was planned three years ago, well before the first report of the quarterback being accused of sexual misconduct with a massage therapist and Watson's demand to be traded by the Houston Texans. The NFL issued Watson an 11-game suspension and $5 million fine this month and says the case is now over.

But it's far from over for this group of professionals and the AMTA, which believes the sanctions are not nearly harsh enough.

“It mind-boggles me that something like that can happen,” said Amber Rasmussen, a therapist of 21 years currently working in Rapid City, South Dakota.

Massage therapy as a licensed profession has a long history, dating to 1916 when Ohio became the first state to license operators. Therapists currently are regulated or certified by 45 states, with hundreds of hours needed to be licensed, and many more in continuing education to keep the certification. Massage therapy is now covered by Medicare Advantage programs and some insurance.

There are stories of massage therapists leaving the industry after the recent crises, though no definitive numbers are available indicating any mass exodus.

The approximately 2,000 therapists attending this year’s convention is similar to 2019, the last gathering after conferences in 2020 and 2021 were canceled due to the pandemic.

“AMTA strongly believes that any client who steps over the line to inappropriately touch should face the legal consequences,” Colizza said in a statement. “Additionally, irresponsible remarks made by lawyers or in the media coverage put professional, licensed massage therapists at risk by condoning inappropriate conduct in a massage environment."

“We believe that massage is and always should be about health and well-being in a safe environment,” she said.

Michael Phelps was the keynote speaker Thursday. Krause recalled how everyone wanted to try cupping as therapy after seeing the 23-time Olympic gold medalist use it during the 2016 Summer Games. Phelps, who won 28 medals overall, also gave credit to massage therapy, positive publicity for the industry.

But that was fleeting — the Atlanta killings by a white gunman who targeted Asian spa businesses and the Watson case have cast therapists in a different light.

“It’s really upsetting,” said Krause, who had to block a former fellow firefighter for his inappropriate joke on her business page. “It’s disrespectful."

NFL players still are allowed to use their own massage therapists outside team headquarters. Part of Watson’s settlement restricts him to massage sessions with club-approved therapists for the rest of his career.

While there were no anti-Watson protests outside Cleveland's Huntingdon Convention Center nor any mention of the Browns quarterback inside, there was an undercurrent that suggested he was an impetus to what some believe needs to be done going forward.

Conference topics were focused on education, ethics, vetting potential customers and setting boundaries. Therapists also talked about renewed diligence about where they work and how they do their jobs.

Mary Czech, of Whitmore Lake, Michigan, said for her, sadly, the latest controversy is not something new.

The college graduate is fully licensed in her home state and certified in oncology massage. She's made sure during 20 years in the profession that she knows how to escape a massage room if a client acts inappropriately, down to the location of the closest phone and police department.

“This has been something I’ve been struggling with,” the 55-year-old said. “I’ve always had a safety plan, and that’s not right.”

Watson's case has revived the disconnect between what massage therapists do as opposed to what people think they do.

Krause only works by referral now. The former firefighter recalled an incident 16 years ago when a man grabbed her arm and complimented her bicep.

“I actually twisted his arm ... and I said, ‘I touch you. You don’t touch me,'" said Krause, of Severna Park, Maryland. “He tried to hug me at the end of the session, and thank God I was in a more public place.”

“I’m dressed in medical clothing, I’m wearing scrubs,” said Menning, who also keeps a large wooden spoon nearby in case someone tries something inappropriate. “I’m trying to give that impression that you’re here for a therapeutic treatment, and there’s nothing else.”

Mentoring young therapists is another key, experienced therapists say, reminding them they have the right to refuse service.

Tonia McGeorge, 36, of Ipswich, South Dakota, makes in-home visits, has her own mobile studio and also works at a spa in Aberdeen.

“It might be someone who has $1 million,” McGeorge said. “But is it worth your career and reputation? ... Your reputation is your integrity.”

That's the big battle for a profession with so many women running their own businesses.

Marcella Thompson of Louisville, Kentucky, said a therapist took a call from a potential client asking for other services. The therapist warned the caller she was going to follow the law by sharing his name and number with police.

“We have to be less intimidated," Thompson said, “and be more stern and make sure those boundaries are completely clear."

Czech is staging her own Watson protest. The Michigan native, who has been a bit of a Browns' fan during her Detroit Lions' struggles, thought of attending Cleveland's preseason finale Saturday night while in town.

But frustrated with the NFL, Czech said: “I'm not going to go to a Browns game now."