Watson, Ryan look forward to meeting as peers on the field 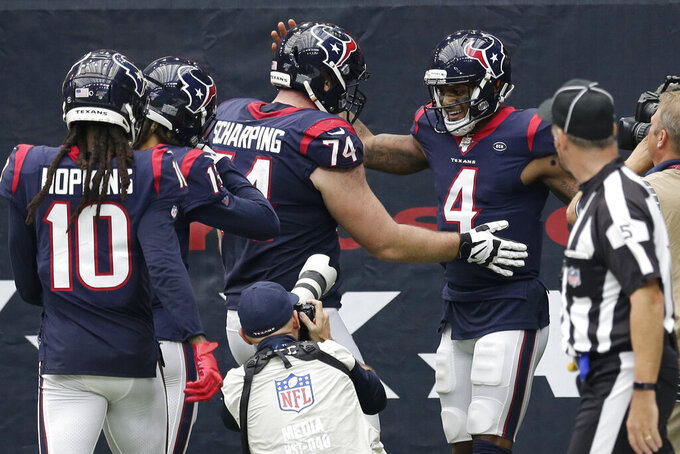 Houston Texans quarterback Deshaun Watson (4) celebrates his touchdown run against the Carolina Panthers during the second half of an NFL football game Sunday, Sept. 29, 2019, in Houston. (AP Photo/Michael Wyke)

Deshaun Watson and Matt Ryan are about to face off as NFL quarterbacks for the first time.

When the Houston Texans host the Atlanta Falcons on Sunday, Watson and Ryan will compete as peers. That’s just how Watson imagined it when he first met Ryan in 2010.

Watson was a freshman at Gainesville High School, 10 miles north of the Falcons’ complex in Flowery Branch, Georgia, when he got a job as a ball boy. He developed a quick friendship with Ryan, learning about big-time football long before he left to star at Clemson.

As a member of the Boys & Girls Clubs of Hall County, Watson participated in a program started by Falcons owner Arthur Blank and was given all sorts of tasks with the team.

“I did the equipment, washed the laundry, I threw to all the receivers, threw with Matt Ryan, watched him throw, did some of the water stuff, helped Arthur Blank out,” Watson said. “I did pretty much everything. I was there for four years and kind of got the whole experience. It was awesome to be able to watch everything, watch the walkthroughs, watch the practices and learn.”

He looks forward to seeing Ryan, receiver Julio Jones and other Falcons employees still with the team.

“Me looking up to all those guys, it was special because they helped me pave the way to the position that I’m in today,” he said.

“Geez, it feels like just yesterday that he was here launching balls to our receivers during training camp,” Ryan said. “He’d always be down at the Dome on Sundays after games and before games helping out. It’s been amazing to watch his career in college and now in the NFL. I’m happy for him. I’m proud of him. He’s a great player and a great competitor and he’s had a great career so far.”

Ryan never saw him play in high school, but he heard all about it as Watson led Gainesville to a state title and set a few state records for yards passing and touchdowns.

“We had a bunch of players from Gainesville that came down and worked,” Ryan said. “They would come in sometimes on Saturdays. They were around quite a bit. We definitely followed the Red Elephants, man. We followed ’em while they were rolling at Gainesville.”

The Texans have forced a turnover in 17 straight games, the longest active streak in the NFL and one that ranks second in franchise history. Houston, which had three strip sacks last week, is tied for second in the league with eight forced fumbles and five fumble recoveries.

Outside linebacker Whitney Mercilus is a big reason for Houston's success. His four forced fumbles are tied with Khalil Mack for most in the NFL, and Mercilus also has an interception.

“We got three last game, and we want to continue to get those,” star defensive end J.J. Watt said. “The more that we can get _ whether it’s putting up points, whether it’s giving the ball back to our offense so they can put up points, however we can help contribute to win the game _ that’s our goal.”

The Texans were flat on offense last week and lost 16-10 at home to Carolina and a backup quarterback, but the matchup against Ryan is seemingly in their favor.

Atlanta has dropped two straight and is coming off a 24-10 setback at home to Tennessee. It was an ugly outing offensively as Ryan couldn’t sustain drives behind a makeshift line. The outlook doesn’t look much better this week.

Six-time Pro Bowl center Alex Mack has a serious elbow injury from the Titans game. If he can’t play, reserve guard Wes Schweitzer will start at center. He entered in the first quarter when right guard Jamon Brown, who’s filling in with Chris Lindstrom on injured reserve, suffered a concussion. Schweitzer moved to center before Mack returned.

The Falcons failed to convert on three of four fourth-down chances and were 36 percent on third down.

Houston still hasn’t found a way to consistently protect Watson. Despite trading for left tackle Laremy Tunsil and drafting right tackle Tytus Howard in the first round and left guard Max Scharping in the second, Watson is getting hit too much for the third straight year.

The Texans have allowed 18 sacks, tied for third most in the NFL. They gave up a league-high 62 sacks last year and ranked second worst in 2017.

Falcons coach Dan Quinn wasn’t exactly keen to discuss the last game he coached at Houston, where the Falcons infamously blew a 28-3 lead and lost the Super Bowl to New England three seasons ago.

“I would say if it was February, and we were playing New England, that would be an interesting story,” he said. “For me, right now, we’re going back to a building and going to try and get our football right. Fair question to ask, but for us it is only about right now. Whether it’s past, or anything different, it’s just about this team attacking right now.”

The Falcons have lost six straight and 12 of 13 to AFC opponents.