Week 2 ICYMI: Back for now, Brown leads the way for Patriots 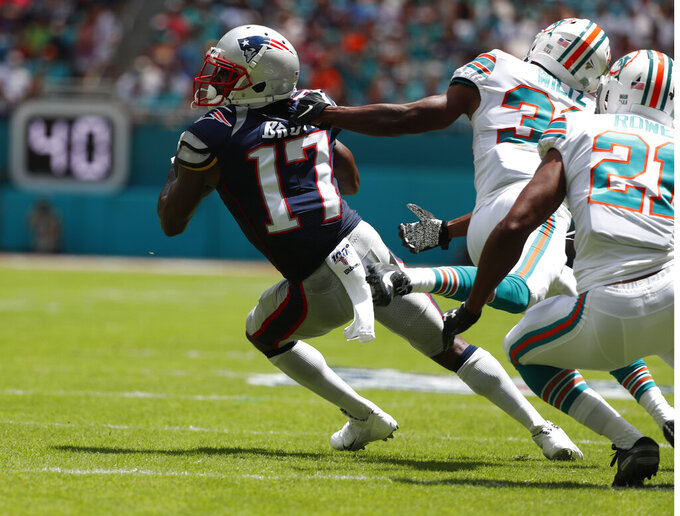 On the field, Antonio Brown was hard to catch. Off it — hard to find.

Brown's debut with the New England Patriots was a success. He was Tom Brady's favorite target Sunday, finishing with four catches for 56 yards and a 20-yard touchdown that he celebrated by vaulting over the wall behind the end zone and into the stands.

New England defeated Miami 43-0 — side note, the Dolphins are awful — but afterward, Brown was nowhere to be seen once the media was allowed into the locker room. His clothes had been removed and his nameplate taken down from his locker.

Thus marked both the end of one tumultuous week and the beginning of another for the Patriots' wide receiver.

Last Tuesday, only three days after Brown signed his contract with New England after being released by Oakland, his former trainer accused him of rape and sexual assault in a civil lawsuit. Brown has denied the claim. His former trainer is supposed to meet with NFL officials on Monday.

In case you missed it, here are some other things people were talking about on the second Sunday of the 2019 season:

WHAT A KICK: How crazy and improbable was the finish to the Bears' game?

Well, to put it simply, Chicago won it on a last-second field goal.

Yes, the Bears — the team that saw its playoff run last season end with a double-doink field goal and tried out nine kickers in the offseason to replace goalpost-banger Cody Parkey — got a 53-yarder from the winner of that contest, Eddy Pineiro, to come out with a 16-14 win over Denver.

The final 31 seconds contained more action than the first 59:29.

— Broncos decide to go for 2, only to get called for delay of game.

— One play after kickoff, Broncos Bradley Chubb called for roughing the passer to give Bears ball on their 45.

— Pinero bangs it through for the win — and gets to keep his job for another week.

AGREE TO DISAGREE: Imagine the conversation Jaguars cornerback Jalen Ramsey and coach Doug Marrone could have had AFTER the game.

Ramsey and Marrone had to be separated during an argument on the bench during the first quarter of Jacksonville's 13-12 loss to Houston. Apparently, Ramsey was upset the coach didn't throw a challenge flag on third-and-2 completion on a drive that led to a Texans field goal.

But Marrone's biggest decision came at the end, after the Jaguars had scored a touchdown to pull within one with 30 seconds left. Marrone went for the win. But a handoff to Leonard Fournette up the middle came up inches short.

"I was very, very comfortable with it. It just didn't work," Marrone said of the play call.

Sorta drowned out the drama from before.

"There are a lot of emotions in the game," Marrone said when asked what happened during the dust-up with Ramsey. "I don't know. I can't recall."

ANYBODY CAN DO THAT: Three touchdowns and 269 yards passing. Five carries for 69 yards.

Sure, anybody can do that — but nobody did it better than Dak Prescott on Sunday.

The Cowboys' quarterback dominated the Redskins in a 31-21 win. No single play made a bigger statement than his 42-yard run in the second quarter, in which it appeared Prescott slowed down so he could deliver a stiff arm to the facemask of cornerback Josh Norman.

Norman, who also got beat on Prescott's 51-yard touchdown throw to Devin Smith, earned some headlines last week while talking about how well the Dallas offensive line has been playing in front of the second-year quarterback.

"You stand back there in the pocket all day and go through your first, second and third reads and come back to your first one, OK, cool," Norman said. "Anybody can do that."

But the quote became a top trender on social media while Norman was taking his share of abuse on the field.

"I'm a little bit surprised. I'd lie to you if I said I wasn't. It's shocking," Norman said of Washington's struggles on defense. "We're much better than what we're doing right now."