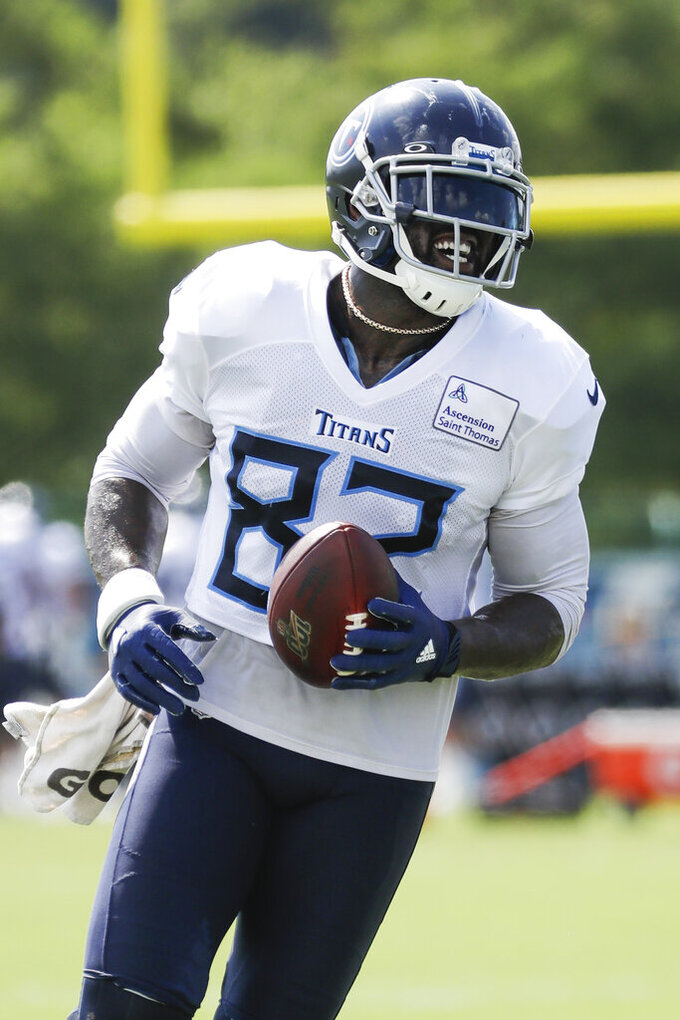 FILE - In this July 31, 2019, file photo, Tennessee Titans tight end Delanie Walker runs a drill during NFL football training camp in Nashville, Tenn. Walker is a week from his 35th birthday, and the Titans' three-time Pro Bowl tight end is heading into his 14th NFL season. He also believes he's in better shape than some 21-year-olds coming into the league. (AP Photo/Mark Humphrey, File)

NASHVILLE, Tenn. (AP) — Tennessee tight end Delanie Walker proudly declared at one point during the offseason that he's in better shape than some 21-year-olds just coming into the NFL.

Walker, who turns 35 on Aug. 12, is preparing for his 14th season and is eager to prove doubters wrong yet again after missing last year with the most serious injury of his career. A Pro Bowl tight end each of his past three full seasons, Walker isn't showing up anyone's list of the league's top tight ends for 2019.

"It's always been like that since I been here in Tennessee," Walker said. "I really can't say anything about it. I don't think they watch our games to be truthful with you. I don't even care. At the end of the day, I always put up numbers. My stats always show up. That's what I look forward to, getting stats."

Before breaking his right ankle in the opener last September in Miami, no tight end in the league caught more passes than Walker (356) between 2013 and 2017. He ranked third at his position with 4,156 yards receiving yards and also had 26 touchdowns during that span and was the MVP of the 2018 Pro Bowl. He's also quarterback Marcus Mariota's favorite target since being drafted by the Titans.

"He's such a versatile player," Mariota said of Walker. "Dynamic when he has the ball in his hands. Having him back creates a lot of space, creates a lot of opportunities for everybody. It's a privilege to play with a guy like that who's done it at such a high level for a long time. I always kind of find myself learning a few things from him every single day."

Without Walker, the Titans' passing offense ground to a near halt last season. Tennessee ranked 29th — ahead of just Miami, Buffalo and Arizona — averaging a mere 185.9 yards per game.

Veteran linebacker Wesley Woodyard said Walker is a piece of the team that nobody wants to cut out.

"He's a playmaker and just to have somebody that Marcus is definitely familiar with at the tight end spot and just having a leader," Woodyard said. "He's a true leader on the offensive side of the field, and he knows how to make plays. And it's good to have him out here. Good to see him healthy."

Walker didn't earn his first Pro Bowl nod until 2015 when he led all tight ends in the league with 94 receptions. He changed his diet that year cutting out pork and limiting red meat, which reduced his body far down to 6 percent. He signed an extension through 2020 at the start of training camp last year, then broke his right ankle in a gruesome injury in the longest game since the NFL-AFL merger in 1970.

He was limited to a scooter for weeks before being allowed to put weight on his right leg, but Walker took part in the offseason program and was fully available from the start of training camp. Walker said he has stuck to the same routine he's used in recent years working to be ready for the season opener Sept. 8 in Cleveland.

"Obviously, I had to do a little bit of other things because of the ankle," Walker said. "Other than that, same routine. Just keep the same resume and work hard. Pretty much that's all I was doing."

Titans coach Mike Vrabel has given Walker some days off for "maintenance" along with some of his other veterans. Vrabel said he's excited to have Walker back.

"The thing that always impresses me about Delanie is he's a professional, he takes care of his body, he studies diligently," Vrabel said. "He's a great example to our young players. We showed him in his sixth year with the 49ers in the Super Bowl, made two tackles on kickoff. That's a great reminder to our young players, or any of our players that are trying to find a role on this team. We use that as an example."