Wentz hasn't been the same since Eagles last faced Seattle 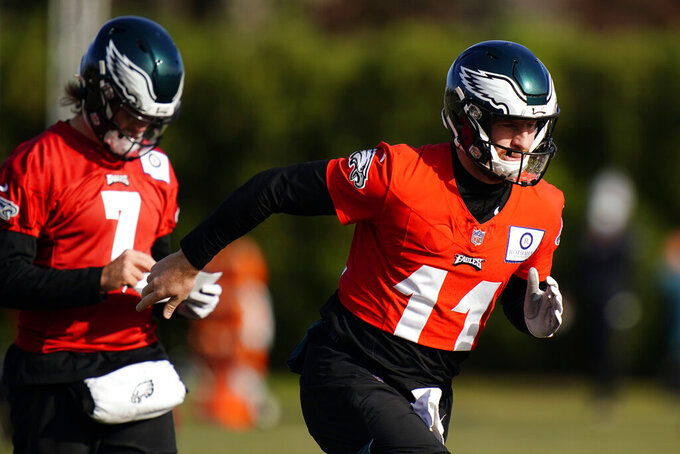 PHILADELPHIA (AP) — Carson Wentz didn’t finish the game the last time he faced the Seattle Seahawks because of a concussion.

His troubles have only grown worse.

It reached the point that coach Doug Pederson hesitated when asked if Wentz or rookie Jalen Hurts would start when the Philadelphia Eagles (3-6-1) host the Seahawks (7-3) on Monday night.

“He’s my starter, end of story,” Pederson eventually said to reporters. “You guys can blow it up however you want it and that’s fine. I’m focused on this team, these players, this coaching staff and the Seattle Seahawks.”

Wentz led the Eagles to four wins to secure an NFC East title last December and earned an opportunity to make his postseason debut after injuries forced him to watch Nick Foles lead Philadelphia to a Super Bowl title following the 2017 season, and a playoff win in 2018.

Wentz was outstanding down the stretch last year, completing 67.6% of his passes for 1,199 yards, seven TDs and no interceptions in four games. But he lasted only nine snaps before Jadeveon Clowney knocked him out with a shot to the head. The Seahawks won, 17-9.

Wentz hasn’t been the same since that hit. He leads the NFL with 18 turnovers, including 14 interceptions, and has career lows in completion percentage (58.4) and passer rating (73.3).

But Wentz hasn’t had much help. Injuries have forced the Eagles to use 12 players on the offensive line, including 10 different starters. Tight ends Zach Ertz and Dallas Goedert, running back Miles Sanders and wide receivers DeSean Jackson and Alshon Jeffery have missed significant time. Wentz is too often throwing to inexperienced receivers who aren’t always running the correct routes.

“I’ve gone back and looked at ’17 and ’18 tape, our coaching staff has, I know he has,” Pederson said, referring to when Wentz finished third in NFL MVP voting in 2017. “We’ve looked at everything from play calling, me, am I different? Am I using personnel right? Am I making decisions that are beneficial for the team? I look at a bunch of that stuff.

Wentz has his best chance to get back on track facing the NFL’s worst pass defense. The Seahawks have allowed 343.7 yards passing per game. They've shown improvement since halftime of a 23-16 loss to the Rams on Nov. 15.

“These last six quarters that we’ve played have been different, and the guys have really taken a step forward in owning what they’re doing and in the communications and the adjustments and utilizing the package, and disguising really well and really feeling comfortable with it," Seattle coach Pete Carroll said.

The arrival of Carlos Dunlap in a trade from Cincinnati has helped the Seahawks turn up the pass rush in recent weeks. Seattle has 16 sacks over the past four games, including three sacks last week of Arizona’s Kyler Murray. It was notable because Seattle didn’t have a QB hit on Murray in the first meeting against Arizona.

Dunlap has three sacks in his three games since arriving in Seattle. And now the Seahawks face an offense that has allowed a league-high 40 sacks.

Seattle linebacker Bobby Wagner is on the cusp of joining rare company. Wagner needs four tackles to reach 100 for the season. It would be his ninth consecutive season with at least 100 tackles, one of just three players since 2000 to accomplish that feat. The other two are London Fletcher and Keith Brooking.

WARM IT UP, CHRIS

Seattle expects to have running back Chris Carson after missing the previous four games with a foot sprain. The Seahawks were out of balance and Wilson was under increased pressure in the three games both Carlos Hyde and Carson were sidelined. Hyde returned last week against Arizona and rushed for 79 yards and a touchdown. His return also lessened the stress on Wilson, who passed for only 197 yards but was efficient and threw two touchdowns in the 28-21 win.

The Eagles chose J.J. Arcega-Whiteside seven picks ahead of DK Metcalf in the second round of the 2019 draft. Arecega-Whiteside has 12 catches and was a healthy inactive two weeks ago before missing last week on the COVID-19 reserve list. Metcalf is already one of the best wide receivers in the league. He had seven catches for 160 yards and a touchdown in Seattle’s playoff win in Philly in January.

Russell Wilson is 5-0 against the Eagles and the Seahawks have won six straight meetings. Philadelphia wanted to select Wilson in the third round of the 2012 draft but he went to Seattle at No. 75. The Eagles chose Nick Foles at No. 88.