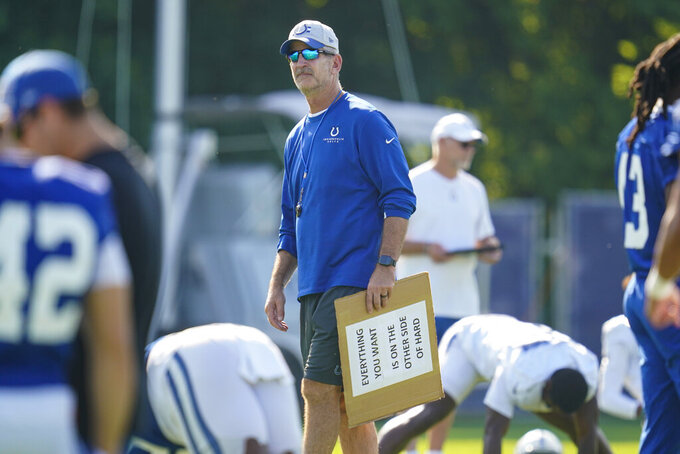 INDIANAPOLIS (AP) — It's game week and Indianapolis Colts quarterback Carson Wentz is eager to get started.

The injured left foot that kept him out for three weeks feels strong enough that he can practice without limitations. He's off the COVID-19 list, which cost him several more practices. And if Wentz gets his way, he'll be starting Sunday against Seattle.

“You’ve got the game plan in, got a lot of things going on, super busy day, early alarm clock today when I woke up,” he said before Wednesday's practice. “It officially registered in my mind it’s game week. It’s go time.”

Wentz certainly looks and sounds like the starter — even if there are hurdles still to be cleared.

First, he needs to make it through full, consecutive practices and demonstrate he's in sync with his new teammates. Then he must be cleared for action by team doctors.

If he does play, Wentz will be Indy's fifth Week 1 starter in five years. If he doesn't Jacob Eason will earn that distinction against his home-state team.

There's little doubt Wentz is eager to begin a new chapter in his career after enduring the worst season of his five-year career. He was benched for the final four games of his Philadelphia career as he dealt with critiques about his leadership style, his locker room presence and the allegedly irreparable rift between him and former coach Doug Pederson.

Philadelphia dealt its one-time franchise quarterback to the Colts in March, reuniting Wentz with his former offensive coordinator Frank Reich.

Here, Wentz took on a persona that appears very different from the one publicly portrayed.

He learned about his new teammates and their lives. He organized workouts at his home. He spoke of team goals, re-established the bond with Reich and was warmly welcomed by teammates and fans alike.

“I’ve always appreciated this about Carson from the first time I was on the field with him, he’s a team-first guy," Reich said. “He doesn’t care about his stats, he doesn’t care about any of that stuff. What he cares about is winning, being a good teammate, being the leader he’s supposed to be. That's a good thing for all of us.”

But the plan changed quickly in training camp when Wentz started feeling pain in his left foot. Three days later, Reich announced Wentz would miss five to 12 weeks after having a bone fragment removed.

He returned to practice three weeks later on a limited basis only to be forced out again when he was deemed a close contact to someone who tested positive for COVID-19. Unvaccinated players, like Wentz, are required to sit out five days, costing him more time to get ready for the opener.

Wentz came back last Thursday, again limited, and now he's scrambling to prepare for an old nemesis. Wentz is 0-5 all-time against the Seahawks, having thrown for 1,040 yards, six touchdowns and six interceptions while completing 60.3% of his passes.

His playing status isn't the only complication for Reich.

Three-time All-Pro guard Quenton Nelson sat out Wednesday with a back injury and top cornerback Xavier Rhodes missed practice with a calf injury. Nelson has started all 51 games, including playoffs, during his career, and has been determined to keep the streak intact since having foot surgery one day after Wentz's procedure.

What they don't know yet is whether Wentz will play.

But if he does, Indy's new quarterback promises the missed time won't affect his play.

“I think it definitely comes down to trusting your guys to make plays when you go off script and those sorts of things but also to trust that the next play we’re going to get it done,” he said. “I feel very optimistic, very confident in (the foot), so we’ll see.”

NOTE: Two-time Pro Bowl left tackle Eric Fisher did limited work at practice for the first time Wednesday. Fisher has been recuperating from a torn Achilles tendon he suffered in the AFC championship game. Fisher was activated off the COVID-19 list Tuesday. Reich didn't rule out Fisher for Sunday but said he needed “to see more.”