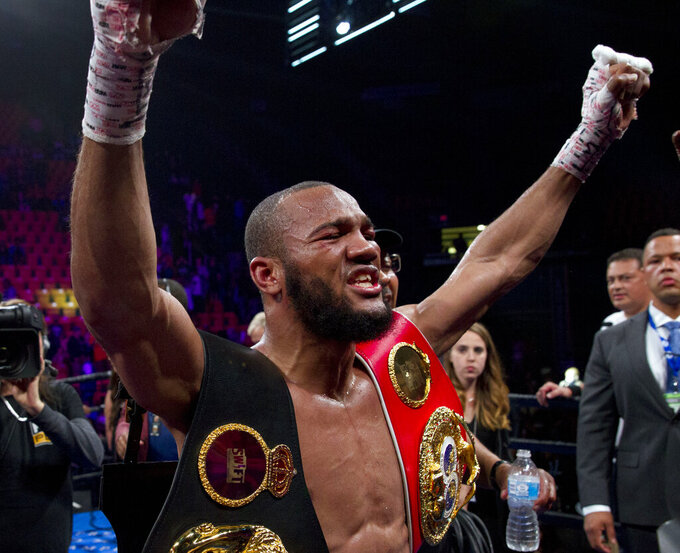 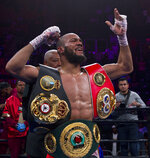 FAIRFAX, Va. (AP) — Jarrett Hurd was welcomed into the ring by the Washington Redskins marching band. He left in a manner familiar to his favorite football team recently, losing to an opponent from Philadelphia.

"This is a dream come true," said the Philadelphia-based Williams, who lost his one previous shot at the IBF title to Jermall Charlo in December of 2016. "I have been waiting for this for years. I never ditched the gym. I never got into girls or left the gym. I am from the streets, but I was never in the streets. I was in the gym practicing my craft."

Williams (27-1-1) knocked down Hurd (23-1) in the second round and stayed on his feet throughout. While both fighters appeared in danger at times, Williams clearly believed he won in the later rounds.

"It wasn't the pressure of being home for Jarrett. J-Rock was the better fighter tonight," insisted Hurd trainer Ernesto Rodriguez. "We want the rematch. Our preparation will be better."

During the middle of the sixth round, arguably Hurd's best, Williams made a "come at me" expression after Hurd connected with a jab. Williams was flexing to his corner after the 11th, and was the more active fighter in the 12th, landing one final promising combination 45 seconds before the bell. When the final bell sounded, trainer Stephen Edwards rushed out of Williams' corner to hoist his fighter aloft.

"I am not shocked. I am just happy," Edwards said. "We just knew that we were going to win. There are certain things that you just know. He trained so hard and he was so ready, I just knew.

Hurd, from Accokeek, Maryland, Hurd entered to a live rendition of "Hail to the Redskins" and wore the team's logo on his robe. He hoped a win here would propel his quest to unify the remaining 154-pound belts. But he failed to seize momentum in front of his fans, who tried to edge him on by chanting "Swift! Swift! Swift!" According to the scorecards, Williams would've won even without his knockdown.

"I just feel like J-Rock truly was the better man tonight," Hurd said. "I kind of think hearing my hometown with my name being chanted, it caused me to try a little harder instead of just staying relaxed and take my time. That could have played a part, but no excuses."

After a quiet first round, Williams appeared to hurt Hurd midway through the second with a pair of combinations, then floored him with about 30 seconds left with a left hook. Hurd rose quickly, but Williams closed on him again as the bell sounded.

Williams continued to look in control until the close of the fifth, when Hurd got him to the ropes and landed a damaging combination.

Hurd then opened the sixth as if he believed Williams had been hurt, connecting with a very early right hook that set off a ferocious round from both fighters and brought chants from the crowd.

But by the end of the seventh, Hurd's corner was attending to a cut over his right eye, and he failed to recapture that energy in the building.

"He wasn't easier to hit than I thought," Williams said of his opponent. "He was crafty and he had heavy hands. I just stayed poised. I listened to my coach and I just worked."

Earlier, middleweights Matt Korobov (28-2-1) and Immanuel Aleem (18-1-2) fought to a majority draw, although it was originally announced as a majority decision in Korobov's favor.

Judge Mark D'Attilio had accidentally scored the 10th round as even, when he meant to score it 10-9 for Aleem, making it a draw on two cards.

In the other co-feature, super lightweight Mario Barrios (24-0, 16 KOs) improved on his perfect professional record with a second-round knockout of Juan Jose Velasco. Barrios caught Velasco with a left uppercut to the abdomen. Velasco looked fine for a moment on replay, but then fell to his hands and knees and did not make the 10 count.