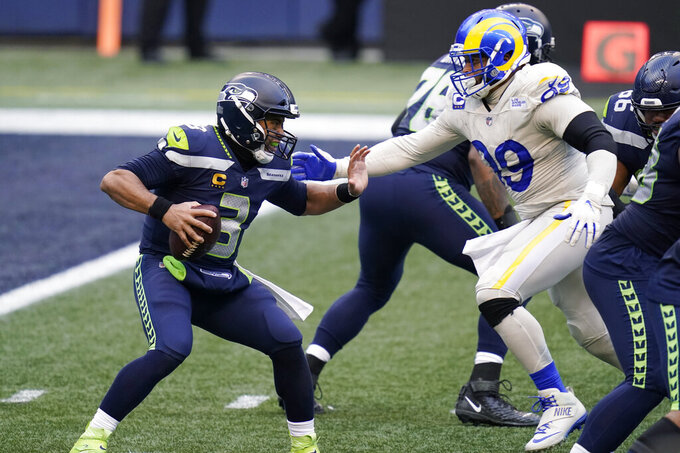 RENTON, Wash. (AP) — Patience can be difficult when at times earlier this season racking up yards and scoring points came so easily for Russell Wilson and the Seattle Seahawks.

But no team has tested Wilson’s patience during his career like the Los Angeles Rams. Or has thrown the Seahawks quarterback for more sacks or given him more headaches.

In other words, don’t expect easy yards or easy points for Seattle on Saturday when the Seahawks host the Rams in the NFC playoffs.

“I mean, they do everything well,” Wilson said.

Just two weeks ago, the Seahawks struggled through a 20-9 victory over Los Angeles. After an ugly first half, Seattle got a couple of big plays early in the second half and pieced together just enough offense to clinch the NFC West title.

Wilson threw for 225 yards and a touchdown and ran for another in that victory. But he was also sacked five times after being sacked six times when the teams met in November, a Seattle loss.

Throughout his career, no team has troubled Wilson like the Rams. He’s 8-10 against them, the only team he has a losing record against. His passer rating of 94.5 against the Rams — while still excellent comparatively — is the second-lowest of any team he’s faced more than four times.

He’s also been sacked 72 times in 18 games by the Rams, an average of four per game.

“They’ve got a great defensive line. They’ve got really good linebackers that can run side by side. The DBs can really play,” Wilson said. “They’re coached extremely well. It’s going to be a great matchup.”

The big plays, the easy touchdowns that defined the first half of the season for Seattle and put Wilson in the MVP conversation have mostly dried up over the final month of the year. Seattle’s offense hasn’t been as much explosive as it’s been just efficient enough. After topping 30 points in seven of the first eight games, Seattle has done that just once during the second half of the season.

It’s made for the appearance that Seattle’s offense is scuffling going into the playoffs. And while that view might not be wrong, the Seahawks take a different angle. They see it as having faced good defenses — Washington, Rams, 49ers to close the season — and rather than trying to force something bigger to happen, allowing its offensive system to take the opportunities that are there.

“The thing I think that we’re pleased with is the last couple of weeks, going up against some good defenses, it took us a little while to get started, but we made some adjustments, we did some things,” Seattle offensive coordinator Brian Schottenheimer said. “There was never any panic, our guys were poised. They knew that we would sort through the issues.”

In his last six games, Wilson topped 250 yards passing only once, a mark he achieved in seven of the first eight games to start the season. But during that six-game stretch, Wilson threw only three interceptions.

It might be boring and at times infuriating for fans. But it’s how Seattle views its best chances for success, especially with a defense playing markedly better.

“We’re going to mix our game, do the things that we like doing, and see if we can find a way to get enough points to win the game. Whatever it is, it is,” Seattle coach Pete Carroll said. “I don’t care about the numbers before or the stats or any of that stuff. It doesn’t matter. All that stuff is gone. It doesn’t matter at all right now. It’s what happens now that counts.”

NOTES: Seattle activated reserve safety Damarious Randall from the reserve/COVID-19 list. Randall had been placed on the list because of a close contact. Seattle also signed TE Luke Willson to the active roster off the practice squad.