Wilson looking at next decade after new deal with Seahawks 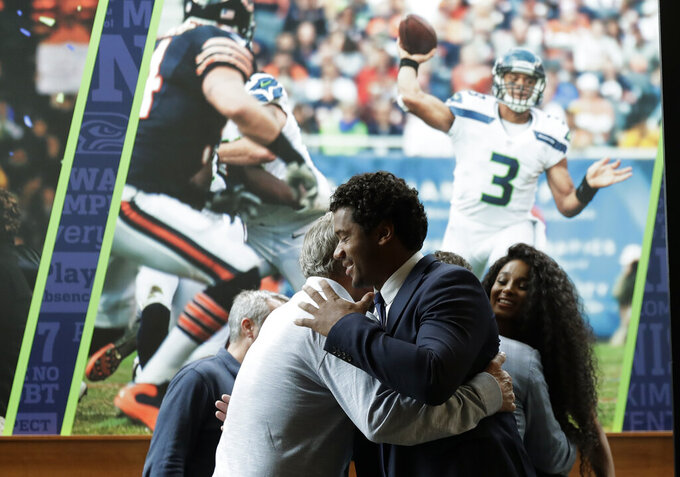 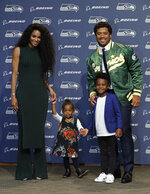 RENTON, Wash. (AP) — When Russell Wilson and his representatives started negotiations with the Seattle Seahawks on a contract extension, they were looking far beyond five more seasons.

Having turned 30 late last season, Wilson tried to project into the next decade and the chances of playing his entire career with one team.

"The next deal was going to be the place where, 'Hey, if we're going to be in Seattle, wherever it's going to be, I want to make sure that's where I'm going to be for the next 10-12 years hopefully,'" Wilson said Wednesday, a day after signing the $140 million, four-year contract extension that made him the highest-paid player in the NFL. "That was kind of my mindset, from (age) 30 to 40. And then you reassess, you add on, and everything else. But the reality was for the next 10 years."

The negotiations wrapped up just before midnight as Monday clicked over into Tuesday. It was the deadline Wilson set for getting a long-term extension done before accepting the likelihood he had only three more seasons in Seattle.

The deadline was real in Wilson's mind.

"I have an obsession with football. I just want to play the game. I just want to be able to focus on that. I remember the first time, (with) the other contract, it was one of those things that took us all the way to the summertime, right before training camp — literally to 11:50 that night and everything else. The next day, we were practicing," Wilson said. "For me, and for everyone involved really, the whole organization, it was really more so of a 'Hey, let's make sure we don't have to drag out this whole process.'"

All sides agreed the previous negotiations dragged on for far too many months. General manager John Schneider said the negotiations should have been wrapped up before reaching the cusp of training camp in 2015.

This negotiation went almost to the deadline before an agreement was reached. Wilson guessed it was about 11:50 p.m. Monday when he got the phone call from agent Mark Rodgers. The deal was done and only needed the quarterback's approval.

The no-trade clause, which means Wilson must approve any possible deal, was the final kicker.

"We talked about the idea of a no-trade clause just because we really wanted to be here. That was the thing we were really excited about and that's kind of what sealed the deal for us. I was really fired up about it," Wilson said.

That wasn't the case several hours earlier. Wilson showed up for the first day of Seattle's offseason workouts Monday and he left the facility that afternoon uncertain whether he would return the next day with a new deal. There had been progress in the negotiations but no guarantees of reaching an agreement. Wilson and coach Pete Carroll spoke before the QB left the building.

While the day was mostly celebratory, there was a twinge of sadness Wednesday as well. Wilson's deal was the first major signing by the team since the passing of owner Paul Allen last fall. Schneider became choked up briefly, saying, "This is a day that Paul Allen would have been extremely proud of," and later recalled a story of the day Wilson was drafted in 2012.

Wilson, Carroll and Schneider all praised the involvement of Allen's sister, Jody, the chairman of the Seahawks organization, in making sure one of the centerpieces of Seattle's success over the past seven seasons wasn't going anywhere.

"Russ has ignited an energy about the games that we play and the style from the offensive side," Carroll said. "I thought it was really important for us. We think we have a really good team and we're really fired up about it, and to be able to maintain this continuity was extremely important for us."