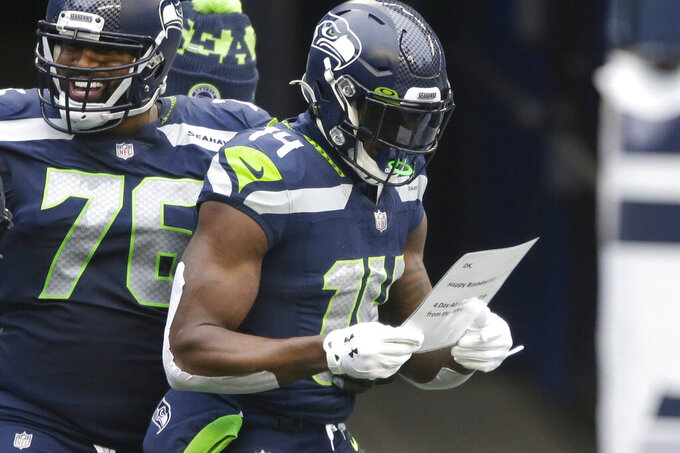 Seattle Seahawks wide receiver DK Metcalf reads a birthday note handed him by his teammates after he scored a touchdown against the New York Jets during the first half of an NFL football game, Sunday, Dec. 13, 2020, in Seattle. (AP Photo/Lindsey Wasson)

SEATTLE (AP) — Eventually, Russell Wilson was going to check off his latest accolade.

Of all the bullet points on his career resume to date, this one might be the most meaningful.

As a result of Sunday’s 40-3 win over the lowly New York Jets, the Seahawks improved to 9-4 on the season, ensuring Seattle of a winning record for the ninth straight season.

That’s every year that Wilson has been under center directing the Seahawks offense, making him the only QB in league history to have a winning record in each of his first nine seasons.

He’s been surrounded by an avalanche of talent along the way. There’s been great performances by Wilson — such as Sunday when he threw four more TD passes — and some forgettable days.

But the longevity of consistently being successful is a staggering achievement.

“I think it means everything,” Wilson said. “I think the whole purpose of why we play, why I wake up and play this game is to win, get up and help our team win.”

Seattle rebounded from a shocking loss to the Giants exactly the way it hoped to stay in the middle of the NFC West title race with the Los Angeles Rams.

Wilson and the Seahawks offense learned from the issues that arose against the Giants, using a quicker passing game and relying on the combo of Chris Carson and Carlos Hyde to rush for 142 combined yards.

Defensively, the Seahawks continued to show progress, holding the Jets to 185 total yards and just 20 yards in the second half. New York didn’t run an offensive play in Seattle’s half of the field for the final 30 minutes.

Seattle’s defense continues to take significant steps ahead from being the worst in the league, statistically, in the early part of the season. The 185 total yards allowed to the Jets were the fewest given up by the Seahawks since midway through the 2018 season when the Raiders managed just 185 yards in a game played in London.

Seattle also added three more sacks on Sunday, giving the Seahawks 27 over the past seven games.

“The Jets have been struggling. That’s exactly the truth and so our guys went out and played like we were capable of playing and didn’t give them much,” Seattle coach Pete Carroll said.

Right tackle will be a spot to watch this week after Brandon Shell had to leave Sunday’s game after aggravating his previously sprained ankle. Carroll believes Shell has a chance to play this week, but backups Cedric Ogbuehi and Chad Wheeler have struggled at times in place of Shell.

“His comments were that he’s not worse than he was last week starting the week, so that’s good,” Carroll said of Shell.

It’s easy to forget that Adams missed four games earlier this season with a groin injury. Which makes the fact he set a new league record for sacks by defensive back in just nine games even more impressive. Adams now has 8 ½ sacks on the season, moving past Adrian Wilson for the most ever by a DB since sacks became an official stat in 1982. He has recorded at least one sack in three straight games.

There hasn’t been much to criticize of Wilson’s season, but he has made some risky decisions with throws at times. He made another Sunday that was intercepted on a terrific play by Marcus Maye. Wilson may have set a new career high in TD passes with 36, but he’s also set a career high in interceptions with 12.

Aside from Shell, the Seahawks came out of the victory mostly healthy. And they should be getting a boost this week with the expected return of cornerback Quinton Dunbar and the possible activation of running back Rashaad Penny for the first time this year.

The one lingering injury is defensive end Carlos Dunlap, who continues to be bothered by a foot injury. Carroll said Monday that Dunlap hopes to play against Washington.

For the third time in four games, the Seahawks face a team from the NFC East either leading or tied for the lead in that division when they travel to Washington. It’s the last of five trips to the East Coast this season for the Seahawks.