Wilson struggles with mistakes in Jets' loss to Patriots 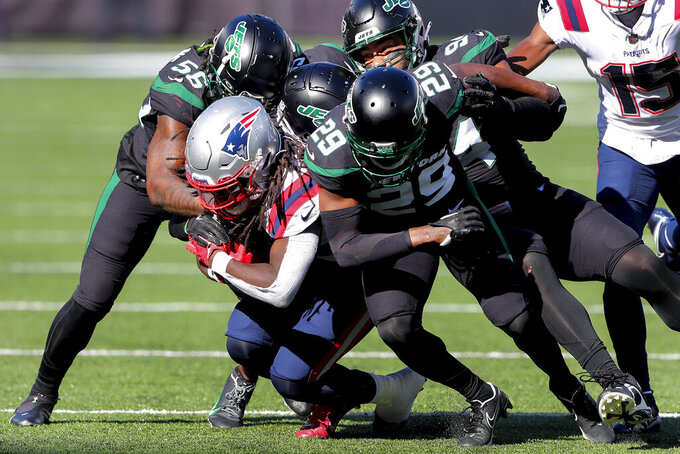 It appeared things might actually be different for the New York Jets this time around.

They got off to a solid start against the New England Patriots in front of a raucous, jam-packed stadium rooting on their team to finally beat Bill Belichick's bunch for the first time in years.

It turned out to be the same old story.

Zach Wilson was intercepted three times, and the Jets dropped their 13th straight to the Patriots, 22-17 on Sunday.

Especially Wilson, whose miscues against the Patriots were a major reason for the end of the Jets' four-game win streak.

The second-year quarterback is still in the progress phase of his development, with the Jets (5-3) looking to see him take clear steps forward and establish himself as the guy who'll lead the franchise for years. Well, Sunday was a major step backward.

Wilson had the first 300-yard passing game of his career, going 20 of 41 for 355 yards and two touchdowns to Tyler Conklin. But the three interceptions might raise some more questions about the quarterback.

“We have faith in Z,” Saleh insisted. “He’s played good football. He has taken care of the football since he’s gotten back. He has shown flashes of good football, so everyone in the locker room still has his back.”

But for how much longer?

Helped by an unnecessary roughness call on Jabrill Peppers, the Jets quickly got into Patriots territory on their first possession of the second quarter. Wilson capped the drive with an 8-yarder to Conklin for a 10-3 lead — Wilson's first TD pass in four games.

But Wilson also was intercepted for the first time in four games shortly before halftime when his pass floated into the hands of Ja’Whuan Bentley, giving the Patriots the ball at the Jets 40.

It appeared Mac Jones gave it right back to the Jets when Michael Carter II intercepted him and returned it for a touchdown — but it was wiped out by a roughing-the-passer call on John Franklin-Myers. It ended up being a momentum-changing sequence or the Jets.

“Ten-point swing,” Saleh said. “It ended up being 17 if you count what happened in the second half. It was a costly penalty.”

The Patriots ended up getting points on the drive, cutting the deficit to 10-6 on Nick Folk’s 42-yarder as time expired in the half.

New England (4-4) started with the ball to open the third quarter and scored a go-ahead touchdown on Jones' 5-yard pass to Jakobi Meyers.

“They had the good drive coming out,” Saleh said. “Credit to them. Other than that, I didn’t feel like they were able to do what they wanted from a defensive standpoint. Offensively, we just kept shooting ourselves in the foot and not allowing ourselves to continue drives and stack together consecutive good plays.”

Greg Zuerlein missed a potential tying 45-yard field goal on the Jets' first possession of the second half and the Patriots added two more field goals to take a 19-10 lead.

Then Wilson was intercepted by Devin McCourty on consecutive drives.

“I just had two bone-headed plays,” Wilson said. "The second interception (the first by McCourty), I really meant to throw that ball away. ... And then the last one, I really just wanted to make a play instead of coming off the field and I can’t do that.

“I put my defense in a bad situation there.”

It was Wilson's first start in a loss this season after he missed the first three games with a knee injury. He rallied New York to a comeback win at Pittsburgh in his season debut, but his play was far from spectacular in the three wins that followed.

Wilson was operating more like a game manager than a game changer who can carry an offense. That was by design, in large part, while New York went up against some tough defenses with Miami, Green Bay and Denver.

New England was another rough opponent for a young quarterback. And Wilson and the Jets were done in by his inability to prevent mistakes.

“We just have to rally around him,” Saleh said. “Coaches, we need to find a way to make it not necessarily simpler, but just help him continue to progress and evolve. He is still a young man. Playing quarterback in this league is not easy. Collectively, we have to do better for him.”