Wilson's solid performance in clutch a great sign for Jets 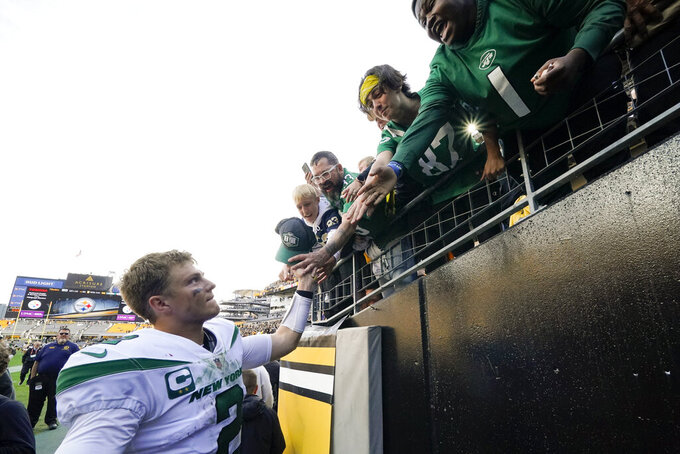 New York Jets quarterback Zach Wilson (2) greets fans as he heads to the locker room after during an NFL football game against the Pittsburgh Steelers, Sunday, Oct. 2, 2022, in Pittsburgh. (AP Photo/Gene J. Puskar)

There were moments in the first three quarters Sunday when Zach Wilson showed flashes of the playmaker the New York Jets thought they were getting when they drafted him No. 2 overall last year.

There were other times when the second-year quarterback — making his season debut after being sidelined by a knee injury — still very much appeared to be a work in progress.

And then came the fourth quarter.

Wilson was masterful in the clutch, leading the Jets to a 24-20 comeback victory over the Steelers in Pittsburgh.

With rookie Kenny Pickett giving the Steelers a spark after stepping in for Mitchell Trubisky, the Jets found themselves down 20-10 with 13:36 left.

It turned out to be plenty of time for Wilson. After completing just eight of his first 24 passes for 124 yards through three quarters, he went 10 of 12 for 128 yards while leading two touchdown drives — capped by Breece Hall's 2-yard run with 16 seconds left.

Throw after throw, Wilson exuded confidence and expressed as much in the huddle on that last possession when he told his teammates it was time to score a touchdown.

“We felt like we were going to go down there and win that game,” tight end Tyler Conklin said. "I felt Zach was really resilient, really confident, and throughout the whole game.

“But I think really in that fourth quarter, he really settled in and he said, 'I'm going to help lead us to victory' — and he did that.”

With young quarterbacks, statistics are often used as a measuring stick for progress. With success comes confidence and the belief a player can achieve at the NFL level.

Handling adversity and winning is another story.

Wilson is still just 14 games into his pro career, and the ups and downs are to be expected. But he showed the entire franchise and fanbase — even if it's just one game — he can take over in the clutch and lead the Jets to victory.

“You look at Zach and he was just hanging in the pocket, very poised, very calm, throwing the ball — throwing darts, throwing lasers — exactly where they needed to go,” coach Robert Saleh said.

The key now is for Wilson to use this as a catalyst, an opportunity to solidify all the optimism and confidence by stringing together a few more winning performances.

“He never shut down,” Hall said after the game. "He never turned it off. You can just tell he believes in himself.”

Offensive coordinator Mike LaFleur said last week the Jets' offense would be “a hair different” with Wilson back at quarterback. It turned out it was a whole head of hair different — and because of Wilson's athleticism.

The best example came in the second quarter when LaFleur conjured up some trickery on a double-reverse with Wilson catching a touchdown pass from Braxton Berrios. Wilson became the first QB in team history with a TD reception.

Conklin also said Wilson was “slippery” while routinely getting out of trouble and avoiding pressure in the pocket.

The offensive line. The big guys up front can't seem to catch a break. Because of injuries to George Fant and Duane Brown, second-year guard Alijah Vera-Tucker moved from right guard — after being a left guard as a rookie — to start at left tackle. Saleh said he was “fantastic” while being an unheralded star of the victory.

But the Jets have another big question mark after rookie right tackle Max Mitchell was carted off the field with a knee injury that will sideline him at least a few weeks. Conor McDermott, Cedric Ogbuehi or Mike Remmers (currently on the practice squad) could replace him at right tackle.

Lamarcus Joyner. The veteran safety had a rough start to the season after missing most of last year with a torn triceps, but was all over the field Sunday. He had two interceptions, including the game-sealing pick as time expired. He also had six tackles and four passes defensed.

C.J. Uzomah. The tight end, who signed a three-year, $24 million deal in the offseason, has been an afterthought in the passing game. He has just one 5-yard catch in three games this season. Uzomah played just 31 of 70 offensive snaps Sunday, with Conklin (57 snaps) getting the bulk of the work at tight end.

Saleh said the Jets will know more about Mitchell's prognosis in the next few days, but placing him on injured reserve is a possibility. ... Brown (shoulder) and DE Vinny Curry (hamstring) are eligible to come off IR this week, but Saleh said the team will make a decision by Wednesday whether to activate them and start the 21-day window in which they can return.

4 — The number of takeaways by the Jets, their most since Week 1 of the 2019 season against Buffalo. In addition to Joyner's two interceptions, Michael Carter II and Jordan Whitehead had picks in the win over the Steelers. It was also the first time since the season opener against Detroit in 2018 that New York had four INTs in a game.

At 2-2, the Jets are at least .500 through four games for the first time since 2017. They opened that season at 3-2, and they'll be trying to match that next week at home against the AFC East-rival Miami Dolphins.