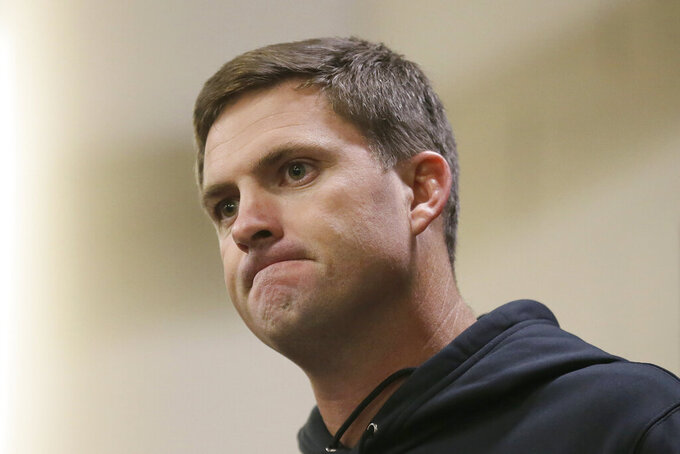 CINCINNATI (AP) — Andy Dalton is getting pushed out the door. A rookie takes over at quarterback. The Bengals are already thinking about their first pick in next year's draft and how they'll shape the roster long term, a function of being winless at the season's midpoint.

The overriding question: How long until any of it makes a difference? If at all?

A 24-10 loss to the Rams in London left the Bengals 0-8 for the first time in 11 years and prompted first-year coach Zac Taylor to bench Dalton in favor of fourth-round pick Ryan Finley, who gets a chance to show he can be the team's quarterback for years to come.

Or, he can struggle behind Cincinnati's dreadful offensive line — just as Dalton did — and leave the Bengals undecided at the most important position heading into another offseason of trying to sell tickets based upon promises of better things ahead.

"I'm sure we'll have to re-evaluate after these next eight games," safety Shawn Williams said. "Is Ryan the answer or what? At this point, what do you do?"

Until their bye week, the Bengals had been doing pretty much the same thing as in years past — holding onto veterans, eschewing prominent free agents and hoping for better outcomes. When they fired coach Marvin Lewis after his 16th season without a playoff win and hired the 36-year-old Taylor, they tried to sell optimism by calling it the start of a "New Dey."

By benching Dalton , Taylor indicated he's ready to start reshaping the lineup — as much as the front office will allow through its personnel decisions, anyway. The move got players' attention.

"This is a new day, it's not just a saying or a phrase for us," defensive end Carlos Dunlap said. "They want to exhaust every opportunity there is to win long-term football."

With Taylor's decision, their long term got murkier.

Dalton led the Bengals to five straight playoff appearances from 2011-15 but couldn't get a postseason win. He has one year left on his contract, but his future with the team appears limited to the rest of this year as a backup.

"If this is the end here, I don't know," the ninth-year veteran said. "I don't know what the future holds, but this is not how I envisioned it."

Receiver A.J. Green — the franchise's best player — can become an unrestricted free agent at the end of the season. He's recovering from a severe ankle injury suffered the first practice of camp and hopes to return in Finley's debut against the Ravens next week at Paul Brown Stadium.

Green wants to stay in Cincinnati if the Bengals are willing to offer a suitable contract. He'll be upset if negotiations fail and the club uses its franchise tag to keep him for one more year.

"For me, it would be an insult," Green said.

In the short term, things could get worse, given Finley's inexperience and the offensive line's continued struggles. The Bengals' running game is by far the league's worst — Dalton has all three of Cincinnati's touchdowns rushing — and they've given up the third-most sacks in the NFL.

It's far from an ideal situation for a rookie quarterback.

The Bengals are two losses away from matching the worst start in club history, an 0-10 mark under Dave Shula in 1993. A loss to the Ravens in Finley's debut would give them 11 straight from the end of last season, tying the club record for longest losing streak over two seasons.

"The first half of the season was embarrassing," Dunlap said.