Without new contract, Julio Jones plans to play in opener 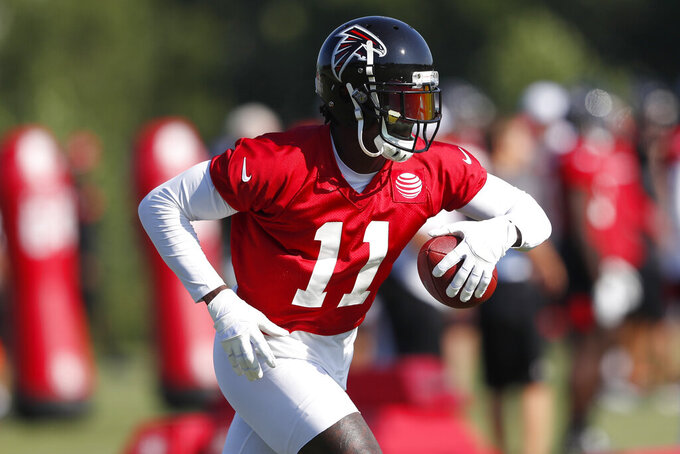 FILE - In this July 25, 2019, file photo, Atlanta Falcons wide receiver Julio Jones (11) runs after a catch during their NFL training camp football practice in Flowery Branch, Ga. For Julio Jones, it's just business as usual _ even as he closes in on a huge new contract with the Atlanta Falcons. (AP Photo/John Bazemore, File)

ATLANTA (AP) — Julio Jones and the Atlanta Falcons have not agreed on a contract extension, but the nine-year veteran wide receiver is still expected to play in Sunday's season opener against the Vikings without a new deal.

Although he has two years remaining on his contract, Falcons officials said all offseason that they anticipate reaching a new agreement with Jones. Owner Arthur Blank has said Jones will be the highest-paid wideout in the league.

That distinction currently belongs to the Saints' Michael Thomas, who in late July received a five-year, $100 million deal.

Jones was limited in practice Thursday after not playing in a preseason game and being limited in training camp by what team officials called a foot injury.

He returned to full practice a couple weeks ago, but said Thursday he was "sore" from practicing for the second consecutive day indoors on artificial turf. The injury report said he was limited in practice for rest.

Asked if he would play in Minnesota without a new deal, he first answered, "I don't know. I don't know."

Jones added: "What I'm trying to do right now is be ready."

When he was asked if there is a chance he would not play without a new contract, he responded, "No. It's just like as far as me, what I'm doing is getting me ready to go. Whatever (general manager Thomas Dimitroff) ... or whoever, the organization and myself make that decision when it's time, we'll make that decision.

"It's not if he'll play or if he's not going to play. We're doing everything we can."

Asked to clarify that he would play without a new contract, Jones said, "You can go with that, correct."

Jones characterized negotiations between the Falcons and his agent, Jimmy Sexton, as "so far, so good."

"Everything's going great. I'm just doing my end, just coming out here and working every day," Jones said. "Today, I was just a little sore, you know, from being inside on the turf, things like that."

Although Jones has not skipped any mandatory team events, including minicamp in June, he did not attend voluntary workouts in the spring.

He has gone to five Pro Bowls, been first team All-Pro twice, and caught 104 or more passes three times while surpassing 1,400 yards in a season five times.

Jones said he does not seek real-time updates from his agent.

"When things have changed, he'll come to me," Jones said. "I've been at work. I mean when I'm at work, I don't get on my phone constantly throughout the day. When I come up here at 6:15, 6:45, I'm here. After work, if he calls me or anything like that, we'll touch bases if he needs to talk to me. If not, I stay focused and do what I need to do."

NOTES: Matt Gono, a candidate along with rookie Kaleb McGary to start at right tackle, did not participate in practice because of a back injury.