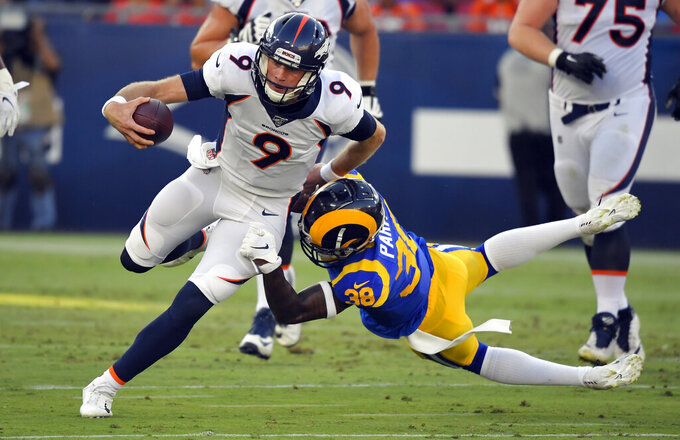 LOS ANGELES (AP) — Jake Butt only played 11 snaps for Denver, and he made only two catches. The tight end's return from his latest major knee surgery still thrilled his teammates on an otherwise quiet preseason night for both the Broncos and the Rams.

Brandon Allen passed for 162 yards, and Jalen Greene caught a 4-yard touchdown pass from John Wolford with 12:38 to play in the Los Angeles Rams' 10-6 preseason victory over Denver on Saturday night.

Both coaches sat nearly all of their starters for the final NFL preseason game at the 96-year-old Coliseum, and neither team managed a touchdown before Wolford led a 52-yard drive spanning the final two quarters and capped it with a sharp pass to Greene . Almost every Rams player expected to make a significant contribution this season skipped this game in keeping with coach Sean McVay's total disinterest in risking his starters' health for meaningless exhibitions.

But these games mean the world to players like Butt. The Michigan product had those two grabs for 17 yards while playing football for the first time since the third game of last season, when he tore a knee ligament and required his third knee surgery.

"I don't want to get too excited about 11 plays in the preseason, but it's definitely a step in the right direction," Butt said.

His teammates got excited for him.

"It's a great sight, seeing him out there catching passes and being able to block," offensive lineman Elijah Wilkinson said. "One of our brothers is back. He works as hard as I've ever seen anybody work, and it's great to see him back."

Butt also missed the entire 2017 season due to knee problems after the Broncos chose him in the fifth round, but his continued health could be a boost for an offense that likes to use tight ends.

"I've played so little in my time here," Butt said. "It's been a grind. I've been tested quite a bit. I just want people to look at this story and find hope, find faith. ... I've been tested more than most, and I've been able to overcome a lot."

"(Allen) is going to get better every chance he gets," said Rams receiver Michael Thomas, who caught a 51-yard pass from Allen among his three receptions for 76 yards. "Just seeing him from last year to this year, he's gotten tremendously better. We just connecting, getting the chemistry going as a team."

Kevin Hogan went 8 of 12 for 69 yards in the Broncos' fourth of five preseason games.

Hogan and undrafted rookie Brett Rypien ran the Broncos' offense with rookie Drew Lock sidelined by a sprained thumb on his throwing hand. Hogan is expected to back up Joe Flacco this season, but Rypien embraced the chance to compete for a job in his first preseason action since the Hall of Fame Game on Aug. 1.

"I wanted to put some good film out here tonight, and I thought for the most part it was pretty good," Rypien said.

Rypien went 14 of 23 for 80 yards with an interception. He led the Broncos to the Rams 25 in the final minutes, but Los Angeles stopped them on downs with 1:08 to play.

Kieshawn Bierria started for the Broncos as an inside linebacker, and his bid for playing time this season got a boost when he made a huge defensive play in the third quarter. Bierria wrapped up Rams tight end Johnny Mundt at the goal line and forced him out of bounds before Mundt could get his short reception over the goal line on fourth down.

Rams cornerback Kevin Peterson got the game's only interception, picking off a throw from Rypien on the first drive of the second half. The pick was the latest big play by Peterson, who appeared to be earning a role on the Rams' defense in training camp last year before he tore a knee ligament in the Rams' first preseason game and was finished for the season.

Most of the Rams' few remaining positional competitions revolve around the players' roles on special teams, and those weren't all great: Los Angeles committed penalties on each of its first two punt returns.

Broncos: Finish their extra-long preseason by hosting the Arizona Cardinals on Thursday.

Rams: Rest their starters again when they visit the Houston Texans on Thursday.