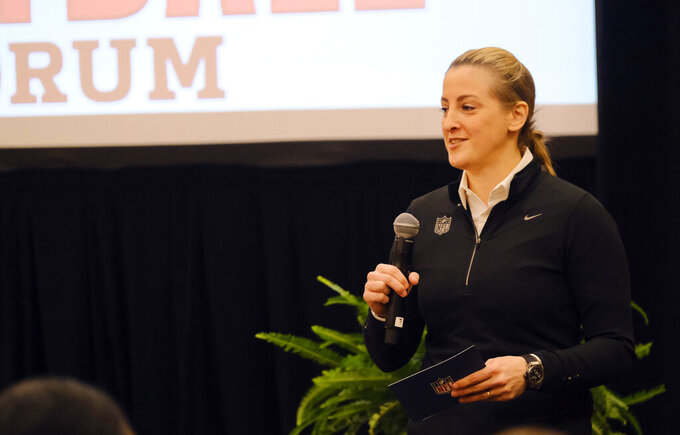 Sam Mullet sat at a table during a lunch break at the NFL combine in Indianapolis, where she was attending the Women's Careers In Football Forum conducted by the league.

In walked Roger Goodell, who sat down at Mullet's table and began chatting with several women, including Mullet, a high school offensive coordinator at tiny Bear Lake High School in Michigan.

That, the 23-year-old Mullet says, was a highlight but hardly the only one during the symposium attended by 40 women hoping to make careers in the sport in such areas as coaching, scouting, operations and management.

"It was a very personable experience," Mullet says. "When I first walked in, we're in this fancy hotel, I am in the city by myself, it can be kind of intimidating. But we walked into the lunch area and Roger Goodell sat at the table and talked to us and asked what are we doing in our careers and how can he help us. He set the tone and was interested in what football could do for us."

The forum, now in its third year, is designed for "putting high-potential candidates in a room with those who can give them their first opportunities in professional football," according to Samantha Rapoport, the league's senior director of football development. Attendees such as Mullet heard from and met with general managers Dave Gettleman (Giants), Chris Ballard (Colts) and Les Snead (Rams); coaches Ron Rivera (Panthers), Sean McDermott (Bills), Bruce Arians (Buccaneers), and John Harbaugh (Ravens); and several prominent female executives in the league, including Dawn Aponte, the NFL's chief football administrator, and Darcie Glazer Kassewitz, president of the Buccaneers' foundation.

"We've seen from the first two years of the forum what has come into fruition is they meet candidates they would not always have the chance to meet," Rapoport adds. "The need, we have found and something the clubs know, is that women are vastly under-represented in operations positions.

"The two key objectives are to educate and to connect, with connecting most important. Creating this opportunity for them to meet and interview, it not only benefits the participants but serves to open the eyes of our club executives to people who want to work in the NFL."

One of the people who does work in the league, Rivera, always has brought a progressive eye to diversity. He's a regular participant in such initiatives and has been impressed by how much this forum has grown.

"I just think the quality of the candidates — we are starting to see more and more qualified people trying to get into the NFL, and it is even better to see more women showing an interest," Rivera says. "It is happening at all different levels and areas and I think it is needed.

"You see some women from high school and college, and some who have already done internship programs in the NFL. ... They have gone through the program and been vetted and shown the desire and know somewhat what it takes to succeed. Because of that, there is no hesitation to hire them."

Mullet certainly hopes she fits that description. One of the few female coordinators at any high school — Bear Lake plays eight-man football, which makes her job more challenging — she's eager to see what else she can do in coaching.

"I would like to end up as an offensive coordinator in the NFL," she notes. "I got this chance to make contacts, and to look for an entry-level position and I want to be staying involved in the game of football. I would go anywhere: college, the NFL, anywhere. I would like to see football at the next level and see things from all sides."

Olivia Mitchell, who also attended the Indy forum, has experienced the college level as assistant director of football operations at Notre Dame, which in some ways is like working for a pro team. Her duties include planning travel and accommodations for the Fighting Irish: "We always say we do everything we can so the coaches and players can focus only on the game," Mitchell said.

Mitchell, 25, wondered if her current responsibilities mesh with what operations people in the NFL do. At the forum, she discovered that the challenges often are similar and transferable.

"My initial reaction when I accepted the invitation and saw the attendees and the level of excellence the forum presented with the people attending," Mitchell says, "I felt I was amongst my peers and surrounded by people who really were going places. To have women who want to be football coaches, which is not something I see every day in my job, and be around people who want to break those barriers, I really found it amazing."

Rapoport envisions a day when such symposiums aren't necessary, a day when diversity initiatives have met their goals, be it "for women or people of color or anyone who will have the same opportunities in football."

"It is a long-term proposition," she adds. "We're not patting ourselves on the back. The results of this forum and our clubs being involved in this effort, we'll likely not see those results for five, 10 or 15 years perhaps. But we are planting the seed and we've seen a culture change in a small matter of time.

"Our goal is to normalize the presence of women in football."