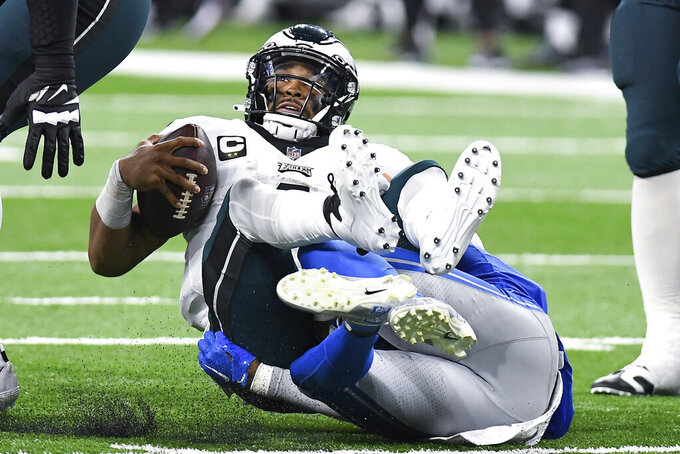 PHILADELPHIA (AP) — A.J. Brown hung an “Always Open” sign — such as the kind you’d find at a diner — last week in his locker.

He can’t be knocked for false advertising.

The Eagles traded the No. 18 pick and a third-round choice to Tennessee for Brown and signed him to a four-year contract worth at least $57 million.

Brown’s 155 yards were the most by an Eagle since Alshon Jeffery had eight catches for 160 yards in December 2018 at the Los Angeles Rams.

“Sometimes the ball just keeps finding you,” Brown said. “I got hot kind of early.”

Brown and Jalen Hurts already had a close friendship off the field. The chemistry is already there on the field.

Brown just might turn out as the best Eagles wide receiver since Terrell Owens led them to the Super Bowl with one of the great single seasons in franchise history in 2004.

Yes, the wideout bar has been low since Owens left, but Brown surpassed the hype that followed him once he was traded to the Eagles. Perhaps not as well known as he should have been playing for the Titans, Brown can rise into superstardom in Philadelphia.

“A.J. made a lot of plays that gave us a lot of momentum,” Hurts said.

In simplest terms, Hurts-to-Brown. Heck, the offense in general. Brown hauled in a 54-yard pass from Hurts in the second quarter. Hurts combined for 256 offensive yards alone (189 passing, 67 rushing) in the first half. Oh, and four Eagles had rushing touchdowns.

For an opener, not bad.

Eagles coach Nick Sirianni said Hurts was in “complete control” on noticing what the Lions were doing on defense.

“He saw the field perfectly, he really did,” Sirianni said. “And I’m really talking more about, ‘You’re doing this, we’ll do that.’ You know what I mean? And he’s going to have plays that he wants back, and we’re going to have calls that we want back, but I thought he played a really outstanding game.”

The Eagles' lone sack came on a fumbled snap and the defensive line failed to put much pressure on Jared Goff. The Eagles missed tackles and the linebackers were sloppy in too many spots. Cornerback James Bradberry, though, came through in the clutch when he returned an interception 27 yards for a score that put the Eagles ahead 21-7 in the second quarter.

Hurts. He perhaps had his signature performance with the Eagles. He found instant success with Brown and threw for 243 yards overall. Hurts ran 17 times, one short of his career high, for 90 yards and a 1-yard touchdown. Philadelphia sealed the win on Hurts’ sneak that converted a fourth-and-1 from the Detroit 40 with 50 seconds left. He had 50 yards rushing in the first quarter, the highest total by a Philadelphia quarterback since Michael Vick ran for 2 more yards in the opening quarter of a 2013 game against the New York Giants.

Hurts did suffer a few too many punishing hits as he tried to make plays with his legs. But making plays on the run is one of the things he does best.

“It’s a great feeling knowing you didn’t meet the standard, but you still were resilient enough, had enough dog in you to find a way to win,” he said.

Jonathan Gannon. The already much-maligned Eagles defensive coordinator faced the critics again after a rough effort against the Lions. The Lions went 9 of 14 on third down and Goff was sacked only once.

“I’ll just talk to him over there and see what’s going on and see what we need to do to adjust,” Sirianni said.

DE Derek Barnett, the 14th overall pick of the 2017 draft, will miss the rest of the season with a torn ACL.

“That’s a big blow for us. I love the way Derek Barnett comes to work every single day and plays with grittiness and toughness,” Sirianni said.

216 — Yes, all the focus was on Brown’s breakout debut. But the Eagles ran for a whopping 216 yards and rushed for four touchdowns. Miles Sanders averaged 7.3 yards per carry and scored a rushing TD for the first time since 2020.

It’s the home opener. The Eagles play Minnesota, coming off a 23-7 win against the Green Bay Packers, on Monday night at the Linc. The Vikings won the most recent matchup in 2019. Kirk Cousins had 333 yards passing in the win. He completed 23 of 32 passes for 277 yards without a turnover in Sunday’s win against the Packers.