WR Ridley back with Falcons, McGary to COVID-19 reserve list 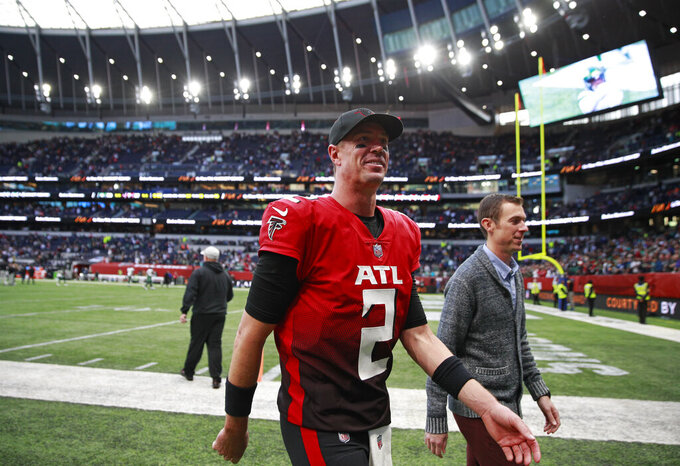 He likely won't be available when the Falcons (2-3), coming off a bye week after playing a game in London, travel to Miami to face the Dolphins (1-5) on Sunday.

Atlanta activated offensive lineman Josh Andrews from injured reserve. He rejoins the roster after going down in training camp with a hand injury.

The Falcons also signed inside linebacker Daren Bates to the practice squad and released defensive lineman Chris Slayton. Bates could be used to bolster the special teams if added to the active roster.

Ridley, who took over as the team's No. 1 receiver after Julio Jones was traded to Tennessee, did not accompany the Falcons on their trip to London for an Oct. 10 victory over the New York Jets.

The Falcons have not disclosed the reasons for his absence. Coach Arthur Smith would only say that Ridley is back with the team, providing quarterback Matt Ryan with a familiar weapon.

Despite missing a game, Ridley has a team-leading 27 receptions for 255 yards and a touchdown.

If McGary isn't cleared before Sunday, the Falcons could move left guard Jalen Mayfield to right tackle and insert Andrews into the lineup on the inside.

Andrews appeared in 15 games for the Jets last season, starting three at right guard and one at left guard. The 6-foot-2, 298-pounder has appeared in 40 games over five NFL seasons with the Eagles, Colts and Jets.

If the Falcons decide to keep the improving Mayfield at his left guard spot, Jason Spriggs would likely move up to start at right tackle.