Young QB tries to follow in Edelman's footsteps as receiver 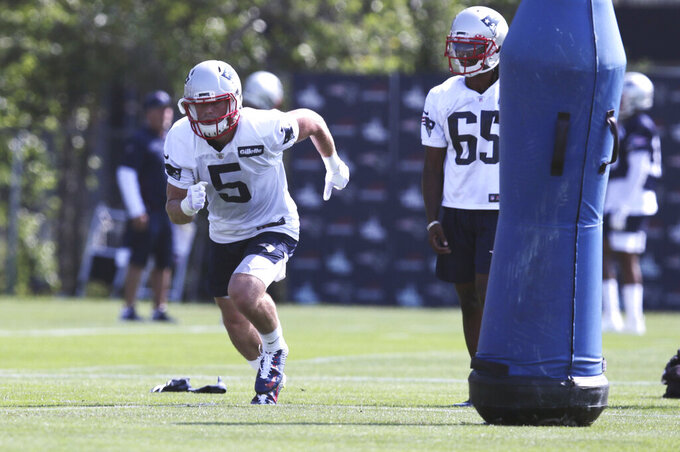 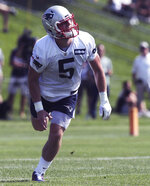 FOXBOROUGH, Mass. (AP) — The New England Patriots struck gold in 2009 when they drafted Kent State quarterback Julian Edelman in the seventh round and converted him to wide receiver. He has had two seasons with more than 1,000 receiving yards and was the MVP in February's Super Bowl.

Danny Etling is hopeful he can replicate that success.

"I love playing football, and whatever I can do to keep playing and continue to improve myself as a football player, I'm going to keep doing it," said Etling, the former LSU quarterback who spent last year on the Patriots' practice squad.

Etling, 25, raised a few eyebrows on the opening day of camp when he ran onto the field wearing a white No. 5 jersey, not the non-contact red worn by quarterbacks, and started taking snaps at receiver. It's part of what appears to be an all-out effort by the native of Terre Haute, Indiana, to avoid being crowded out of a potential roster spot.

"It's an exciting thing, and I'm thankful that the coaches see enough talent and enough potential to let me try this out," Etling said Friday. "We're going to keep working hard and continue to improve in all the different roles they're going to have me do."

Included in Etling's agenda are attempts to play wide receiver and several special-teams squads, including the punt and kick return and protection units.

It's not the second time in Patriots history such an effort has been made. Aside from Edelman's successful conversion, former Boston College star Doug Flutie offered in the late 1980s to play receiver or return punts in an effort to win over then-coach Raymond Berry and keep his roster spot. That was ultimately unsuccessful.

There seems to be a similar air of desperation surrounding Etling's attempt.

Tom Brady and backup Brian Hoyer are entrenched on the depth chart, and the team selected Auburn quarterback Jarrett Stidham in the fourth round of this year's draft as a possible successor to Brady, who will turn 42 next week.

Friday was the kind of day that could have increased Etling's stock at quarterback. With Brady taking an unusual day off this early in camp, Hoyer and Stidham took all the practice snaps behind center. Etling got in some throws in a lengthy side session after practice, but his practice work was solely as a receiver.

"I don't really try to count roster projections or anything like that," he said. "I have a lot of things to try to continue to improve on, and this is just another role. Hopefully I can continue to improve at that, keep improving at quarterback, keep improving at every single thing I can do because change is constant. You never know what you're going to need in a season or wherever else. As much football as I can learn, and as good as I can get, I'm going to do it."

Hoyer said it's not far-fetched to see Etling as a possible contributor at another position.

"Going back to last year, he was one of our best scout team receivers," the veteran backup said. "Any time you get a chance to go out on the field, regardless of whether it's special teams, your position, maybe they ask to put you in a new position, you do it to the best you can and show people what you're capable of doing."

Etling notes he enjoys the challenge.

"It's difficult in a sense, but it's also just new," he said. "The more and more I do it, the more I think I'll get comfortable at doing it."

By Dan Scifo 26 minutes ago
By Josh Dubow 7 hrs ago
By Dennis Waszak Jr. 7 hrs ago
By The Associated Press 8 hrs ago
By Stephen Whyno 16 hrs ago