Zimmer couldn't figure out why Vikings had 'different vibe' 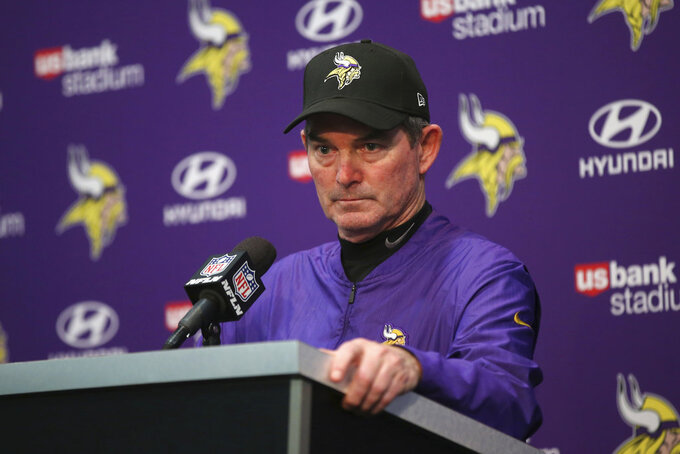 FILE - In this Dec. 30, 2018, file photo, Minnesota Vikings head coach Mike Zimmer speaks during a news conference after an NFL football game against the Chicago Bears, in Minneapolis. Zimmer's fifth season as head coach of the Vikings ended with plenty of questions about the team's direction and without the playoffs. (AP Photo/Jim Mone, File)

EAGAN, Minn. (AP) — The Minnesota Vikings followed their NFC championship game appearance by signing the most accomplished quarterback on the market and adding a premier defensive tackle. They put themselves squarely in the offseason conversation about legitimate contenders for the Super Bowl.

That turned out to be just talk , for many reasons that were perhaps part of the mystery and unpredictability of major sports.

"This football team through four years that I've been here had that 'nasty, we're going to win regardless of what the situation is' mentality, and I don't know that we had it this year," Zimmer said. "I talked to a couple people during the season around the building, and I actually said to them, 'It's just kind of a different vibe with this football team, and I can't figure out why.' Because we had a lot of the same guys back. We have good football players. I wasn't really different than I normally am. But for some reason we didn't finish the games like we'd finished before."

The Vikings went 8-7-1, missing the playoffs when defending champion Philadelphia, the team that beat them so soundly in the semifinals a year ago, leapfrogged them on the last day of the season. Losing 24-10 at home on Sunday to division-rival Chicago , with a mostly lethargic offense, a couple of critical lapses on defense, and special teams lacking a momentum-changing play, was a fitting conclusion.

"But we're going to get that mentality back," Zimmer said on Thursday at his wrapup news conference. "I can promise you that."

If not, there's no guarantee Zimmer will last in Minnesota past 2019. Asked whether he'd be comfortable working on the final year of his contract without an extension in place, Zimmer didn't flinch.

"Sure, I've got no problem with that," he said. "Free agent after that, right?"

One of only 11 current head coaches in the NFL who would have five or more years of tenure with their team, Zimmer is now the dean of the NFC North with Green Bay firing Mike McCarthy last month and Chicago and Detroit making their changes after last season. This much, at least, was certain surrounding the 62-year-old Zimmer's status: He didn't consider retiring or resigning.

The sudden death of beloved offensive line coach Tony Sparano took quite an emotional toll on Zimmer and his team three days before training camp began. Sparano's absence was clearly felt intangibly throughout the season. The rift that developed between Zimmer and offensive coordinator John DeFilippo, for one, could have been bridged by Sparano, who was a friend to both.

"This guy was a type-A personality. He was very innovative in the running game and had a strong voice in that room and a strong voice with me," Zimmer said. "Yeah, I do feel like we lost a bit of our identity. We're going to get that back."

Zimmer vowed a thorough evaluation of all that went wrong for the Vikings this season, including his own decisions and performance. He didn't have to wait to acknowledge Thursday his responsibility for the deterioration of his relationship with DeFilippo, who was fired with three games to go after less than a year on the job . Zimmer wanted the Vikings to run the ball more, and DeFilippo's play calls didn't always strike the balance he sought.

"I still think Flip is a good football coach. I just didn't like the direction that it was going at the time, and I was trying to make something to get us going again," Zimmer said, adding: "I've learned a lot about the questions, the interview process, about things that I probably should do a lot better than what I did, and hopefully I'll do better this next time."

The first order of business for Zimmer, just like last year, will be to hire his top assistant.

Interim offensive coordinator Kevin Stefanski's contract will expire on Tuesday, and he's a candidate for other open jobs around the league, including the head coaching vacancy in Cleveland, according to multiple reports. Zimmer valued Stefanski enough to block him from moving on last year.

"I'm looking at all kinds of options there. We're sitting down and evaluating everything. I think Kevin's a really good football coach, a very smart guy. I thought he did a good job for the three weeks, in a tough situation that we had to do," Zimmer said. "It's fair to the organization, to myself, to the fans, that we look at everybody."