From afterthought to awesome, Edmonds emerges for Cardinals 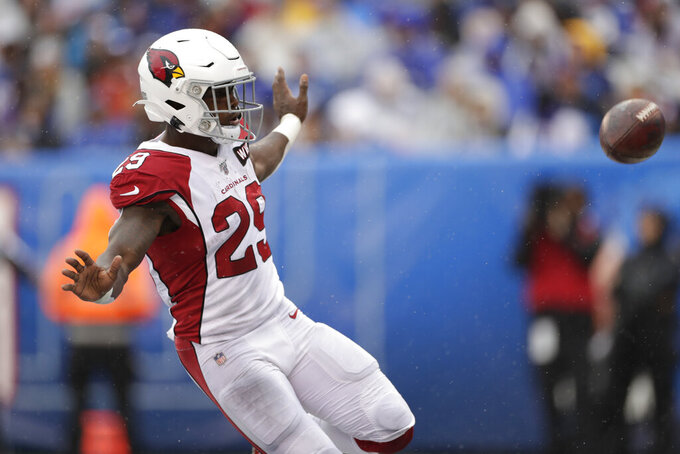 Arizona Cardinals' Chase Edmonds reacts after scoring during the first half of an NFL football game against the New York Giants, Sunday, Oct. 20, 2019, in East Rutherford, N.J. (AP Photo/Adam Hunger)

TEMPE, Ariz. (AP) — Chase Edmonds was an afterthought in the Arizona Cardinals' season-opening tie against the Detroit Lions, touching the ball a grand total of once on a five-yard carry.

Six games later, he's become one of the team's most important players.

The 5-foot-9, 205-pound Edmonds had the best game of his career Sunday, running for a career-high three touchdowns and 126 yards on a rain-soaked field in a win over the New York Giants. For first-year coach Kliff Kingsbury, the performance was validation that hard work matters.

"He's earned every inch of it," Kingsbury said.

Edmonds was largely unknown until a few weeks ago, when he started to form an interesting tandem with starter David Johnson, especially since both had a knack for catching passes out of the backfield.

With Johnson dealing with an ankle injury Sunday, Edmonds emerged with a breakout performance, slicing through the Giants' defense with powerful running and breakaway speed, even in soggy conditions.

It helped the Cardinals (3-3-1) win their third straight game and suddenly become a factor in a loaded NFC West that includes the San Francisco 49ers (6-0), Seattle Seahawks (5-2) and Los Angeles Rams (4-3).

They'll go for four straight wins in a road game against New Orleans (6-1) on Sunday.

Considering Arizona had just three wins all season in 2018, these are good times for the franchise.

"I think it's important to enjoy the wins that we are getting," Edmonds said after Sunday's win. "Last year was a very rough year. But now that we have this confidence back, we got P2 (Patrick Peterson) back, our defense is really looking good.

"We just have to find ways to continue be better offensively."

Arizona's offense is still built around quarterback Kyler Murray, the No. 1 overall pick who has emerged as a dual threat in just half a season.

But Edmonds — a second-year pro who was a fourth-round draft pick in 2018 out of Fordham University — has proven a capable wingman. Murray's passing game was largely grounded in the wet conditions vs. the Giants and he finished with just 104 yards through the air.

Edmonds said he expects Murray's passing numbers will return to normal in good playing conditions, but the running game will continue to be a vital part of the offensive mix.

"It helps us get back on schedule," Edmonds said. "It helps us stay manageable on third downs and it keeps Kyler comfortable."

Edmonds' role as the feature back might extend into the foreseeable future. Johnson didn't practice Wednesday because of his ailing ankle and third-string back D.J. Foster is dealing with a hamstring injury.

The Cardinals signed veterans Alfred Morris and Zach Zenner on Wednesday to add depth at running back after Edmonds played nearly every snap Sunday.

"He works really hard and is one of the best-conditioned players on our team," Kingsbury said. "Trains year-round, like it's the end of the world. He's a guy who can handle it, I just don't want to put him through that for 16 games."

Edmonds was popular in the Cardinals' locker room even before his newfound stardom.

Murray said the running back "brings good energy" and is "goofing off all the time but knows when to be serious." Defensive end Chandler Jones said Edmonds "has a lot more where that comes from" when it comes to production on the field.

He's got another fan in Kingsbury.

"Guys recognize character and work ethic, the way he treats people and carries himself," Kingsbury said. "You see how excited everyone is for his success because they know the hours he's put in."