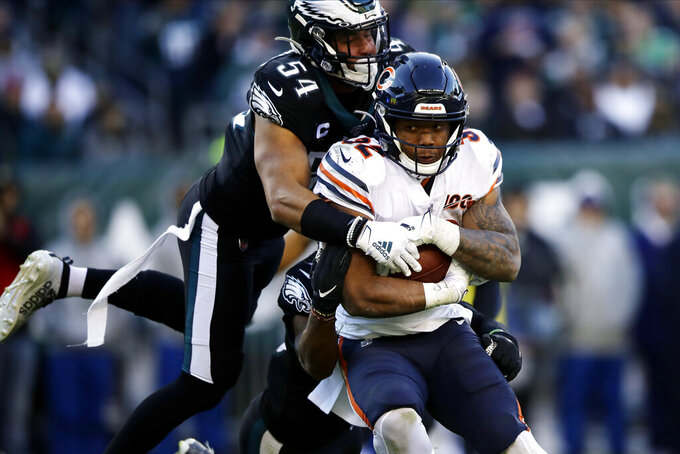 PHILADELPHIA (AP) — The Bears' stat sheet for most of the first half read like Chicago's winter forecast.

Yards passing after the first quarter? Try minus-2.

Total yards in the quarter? Minus-1.

Don't worry: Once Chicago warmed up, the offense hit single digits: 9. As in total yards in the first half. Or one less than inept Mitchell Trubisky's uniform number.

And on the scoreboard, a fat 0.

The Bears survived one of the worst offensive outputs in recent franchise history to gamely make a run at the Eagles in the second half. They trailed 19-0 before David Montgomery had a pair of 1-yard TD runs to make it a one-possession game in the fourth quarter.

The Eagles had enough on the final drive to hold on Sunday for a 22-14 victory, sending the Bears to their fourth straight loss.

"The score felt a lot worse than it was," coach Matt Nagy said.

The late push in a game the Eagles tried to give away made Chicago seem more competitive than it actually was in a rematch of last season's playoff game. The Bears lost that one on the famous double-doink field goal attempt that hit the upright and the crossbar. They lost this one on a double dose of offensive incompetence: Trubisky was only 10 of 21 for 125 yards and Montgomery topped the running game with a measly 40 yards.

The Bears seemingly started every drive down 10 yards before second or third down.

"We just couldn't get going and it snowballed. One thing after the next," Nagy said.

Nagy said he never considered making a QB change, and stuck with Trubisky through a string of sacks and incomplete passes. Trubisky was sacked three times.

"You're just looking for that one or two plays that will turn things around," Trubisky said. "You've got to have conversations on the sideline and just be real with each other and figure out how to change things."

The Bears got going in the third when Trubisky hit Taylor Gabriel on a 53-yard pass to the Eagles 9 and Montgomery ran in from the 1 to make it 19-7. Montgomery again leaped in from the 1 early in the fourth quarter, getting Chicago within 19-14.

The Bears had nothing left.

The Bears didn't get a first down until there were 48 seconds left in the first half. They had eight penalties for 56 yards in the first half, and somehow three players were flagged for a combined four offside penalties.

"You see the (stuff) that (Jason) Kelce was kind of doing with the ball. Just moving it a little bit," Bears linebacker Khalil Mack said. "But even then, can't make excuses. That's not the type of group we have."

The Bears are 3-5 and could hope two games against Detroit and one against the New York Giants over the next four could give them a jolt. Nagy has public faith in Trubisky, a former No. 2 overall pick who isn't playing like a franchise QB. Chase Daniel would be just a quick fix with no guarantee of fixing anything as Chicago's season slips away.

The Bears looked more like their old dominant selves on defense against the Chargers last week after getting pushed around by Oakland in London and New Orleans at home. They went from giving up a season-high 424 yards against the Saints to holding Los Angeles to 231.

But the Eagles got them for 373 yards and stayed on the field long enough in the fourth to wipe out a potential comeback. The Eagles sealed the win with a 16-play, 69-yard drive capped by Jake Elliott's 38-yard field goal. Carson Wentz completed all four of his third-down passes on the drive for first downs, and the Eagles held the ball for 8:14.

"I understand how hard it was coming up to their home field," Mack said. "It was going to take a lot from the defense to put in a position to win the game."