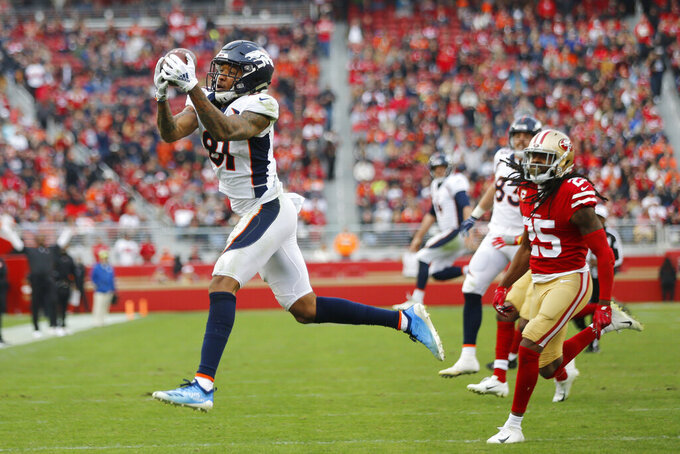 FILE - In this Dec. 9, 2018, file photo, Denver Broncos wide receiver Tim Patrick catches a pass as San Francisco 49ers cornerback Richard Sherman (25) looks on during the second half of an NFL football game in Santa Clara, Calif. Patrick who broke his left hand in the opener at Oakland after playing just eight snaps on offense and nine on special teams, is expected to return to the 53-man roster this weekend. (AP Photo/Josie Lepe, File)

ENGLEWOOD, Colo. (AP) — The Denver Broncos are putting cornerback Bryce Callahan on injured reserve and will bring second-year wide receiver Tim Patrick off IR to take his roster spot before their game Sunday at Minnesota.

Coach Vic Fangio said Friday that Callahan will undergo surgery soon to replace a bent screw in his right foot that was implanted last December to hold broken bones together and allow them to heal properly.

“This time we need to make sure the screw doesn’t bend,” Fangio said. “We need to go to a better hardware store.”

Callahan, who followed Fangio from Chicago to Denver last winter, signing a three-year, $21 million free agent deal, was in too much pain to play with the bent screw after getting stepped on during a practice at the team’s stadium on July 27.

Although he remained on the 53-man roster, Callahan didn’t attend a practice again until Wednesday, when he was too limited to really participate.

Fangio said he expects Callahan to be ready for the team’s offseason program next year.

Patrick broke his left hand in the opener at Oakland after playing just eight snaps on offense and nine on special teams.

"We've missed him," offensive coordinator Rich Scangarello said. "He's got great energy. He really got confidence at the end of last season, so I'm excited to see what he can do."

Having a pair of big wide receivers — at 6-4 and 212 pounds, Patrick is the same height and just four pounds lighter than flanker Courtland Sutton — should help QB Brandon Allen when the Broncos (3-6) visit the Vikings (7-3) .

"He's been here and he's a big, physical target,” Allen said. “Any time you have two of those guys like Courtland and him it's going to be a mismatch for a lot of defenses."

Patrick averaged better than four catches for 61 yards a game over the final four weeks last season after Emmanuel Sanders went on IR with a torn Achilles tendon. He has the opportunity to make a similar impact with Sanders recently traded to San Francisco.

Patrick is a welcome addition to an offense that’s averaging just 16.5 points.

"It's exciting to have him back because he does so much,” Sutton said. “He can run plays from the slot because he's shifty. He can go make the big play on the sideline because he's a big guy. He's fast and he's smart. Everything that you want out of a receiver his size, he does it and he does it really, really well."

The other injured player the Broncos have designated for a possible return to the active roster is rookie QB Drew Lock, who completed his first week of practice Friday. The Broncos have until Dec. 3 to make a decision on Lock, a second-round pick from Missouri who sprained his right thumb in the preseason.

Couching his comments by noting it's a small sample size, including just a handful of snaps with the starters, Fangio said Lock benefited by taking a step back.

"I think the time off in some ways, although you never want it, helped him. I think he learned a lot whereas when he was going through it in the spring and in training camp before he got hurt, it was piling up on him I think," Fangio said. "Besides learning the new offense and being under center, which he had never done in college, all those things were piling up on him and getting in the way of progressing the way you'd like to see him progress. I think through his time off he's been able to solve some of those issues emotionally and mentally."