Colts plan to build off foundation from historic turnaround 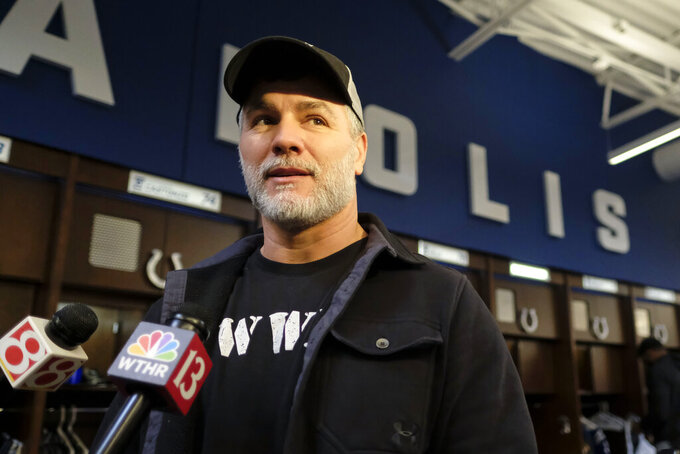 Indianapolis Colts kicker Adam Vinatieri speaks to the media in the locker room at the NFL team's facility in Indianapolis, Sunday, Jan. 13, 2019. The team ended their season with a loss to Kansas City in a playoff game the day before. (AP Photo/AJ Mast)

Frank Reich acknowledged some of his best work came in a backup role.

Apparently, It still does.

A healthy Luck and an opportunistic first-year coach led the Colts on a historic midseason turnaround, ending with a playoff run and a glimpse into a potentially promising future.

"We left our hearts on the field every game," Luck said Sunday, a day after a 31-13 elimination loss at Kansas City. "I know we all wished we played better yesterday. It's sad. We wanted this somewhat magical season to continue and we'll use that to motivate us."

That could be bad news for a team that seemed to defy the odds at every turn.

Most figured the Colts hit rock bottom when Josh McDaniels backed out of a deal to become the Colts' new coach while Luck continued to rehab his throwing shoulder in early February. General manager Chris Ballard wasted no time in making Reich, the offensive coordinator for the Super Bowl champion Eagles, his second choice.

The odd sequence included Reich inheriting a defensive coordinator in Matt Eberflus, who he didn't know much about and was already plotting a conversion from a 3-4 front to a 4-3. Reich followed the advice of Ballard by keeping him in the same role and adding two more first-year coordinators to his staff.

But the Colts never bought into the perception and delivered the kind of season nobody thought possible when they lost their fourth in a row in mid-October.

Luck rounded into form, the Colts developed a balanced attack, their revamped offensive line became a virtual fortress and the oft-criticized defense suddenly emerged as one of the league's stingiest units.

The Colts (11-7) won nine of their last 10 regular-season games to become the third team in league history to make the postseason after starting 1-5, followed by a wild-card win at Houston.

"You wonder as a first time head coach, what is this really going to be like? I just couldn't have imagined in my wildest dreams how this year was," Reich said. "The guys in this building, the guys in that locker room, the coaches and players they just exceeded any of my wildest expectations."

Luck had the best overall season of his career, throwing for nearly 4,600 yards and 39 touchdowns while setting career highs in completions, attempts and percentage. He was sacked a league-low 18 times, one season after the Colts allowed a league-high 56 sacks.

Meanwhile, Marlon Mack fought off injuries to finish with five 100-yard games — the most by a Colts running back in more than a decade.

Eric Ebron finally delivered on the first-round promise the Detroit Lions saw in 2014 by catching 13 touchdowns to lead the league's tight ends and earning his first Pro Bowl selection.

"It was a helluva time, a helluva season," center Ryan Kelly said. "Guys were fighting for each other and it was just a good time."

But Reich's favorite might have been watching the rookies develop.

Quenton Nelson and Braden Smith were rock solid at left guard and right tackle, and linebacker Darius Leonard led the league in tackles with a franchise-record 163. Nelson and Leonard became the first rookie teammates to earn first-team All-Pro honors since Dick Butkus and Gale Sayers achieved the feat in 1965.

Now, with Luck heading into his first healthy offseason in four years, a veteran coach and proven players, Reich knows the expectations will increase next season and he promises to be ready.

"We had an opportunity to learn so many lessons this year," he said. "We lost four or five and then won 10 or 11. So we've had a taste of that. I think handling success and high expectations is always more difficult but I believe in the guys, the players, the leaders to get that done."