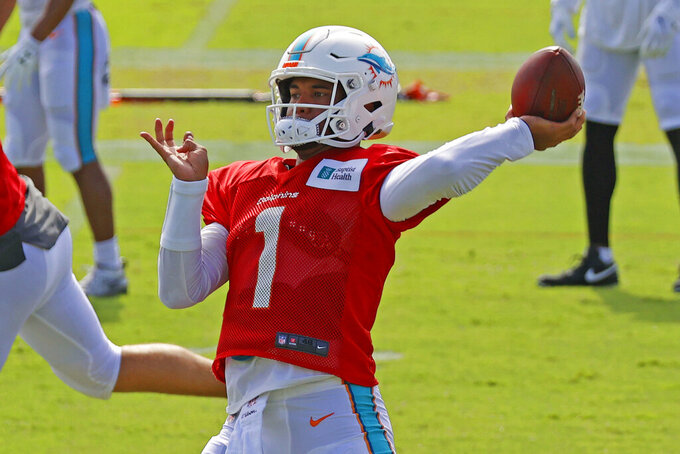 It was a chance to forget about the coronavirus for a while, linebacker Kyle Van Noy said.

“You put that to rest until you have to deal with it again,” he said, “and focus on your job and having fun. We had a lot of fun today.”

The introduction of hitting to training camp was part of a crash course in preparation for a season less than four weeks away. The Dolphins expect to improve on last year's 5-11 record, but also face the NFL-wide challenge of meshing in a camp abbreviated because of the pandemic.

There are plenty of newcomers on the Miami roster, including 10 high-profile free agents signed for $235 million and a large, promising rookie class led by top pick Tua Tagovailoa.

The former Alabama quarterback, coming back from a hip injury that ended his college career in November, took full part in practice and appeared 100% in more ways than one. Twitter tabulations had him completing both his passes in team drills, and handing off a lot.

Second-year coach Brian Flores said there's no carryover for his team from last year, when he led a remarkable turnaround after Miami started 0-7. He doesn't expect his players to block and tackle or run or catch the way they did in a season-ending upset victory at New England.

“When you haven’t done it for eight or nine months and you’re out of that practice, you need to get back into it,” Flores said. “You don’t just jump back in the way you were a year ago. That doesn’t happen for any of us — coaches, players. We all need to get out there and practice.

“Like I’ve said to these guys, last year was last year and nobody is really worried about it. Let’s just focus on right now.”

Flores said he already senses a good team chemistry developing. But veteran newcomer Ted Karras conceded the dynamics of relationships with new teammates are different this year, because the pandemic wiped out most NFL offseason work.

“I was a little frustrated with myself early on in camp that I didn’t know enough names," Karras said. “I looked up the roster myself. But now that we’re in the building more and coming together — everyone is at practice — I pretty much know everyone on the team’s names.”

That's one sign of progress toward the scheduled Sept. 13 opener at New England.