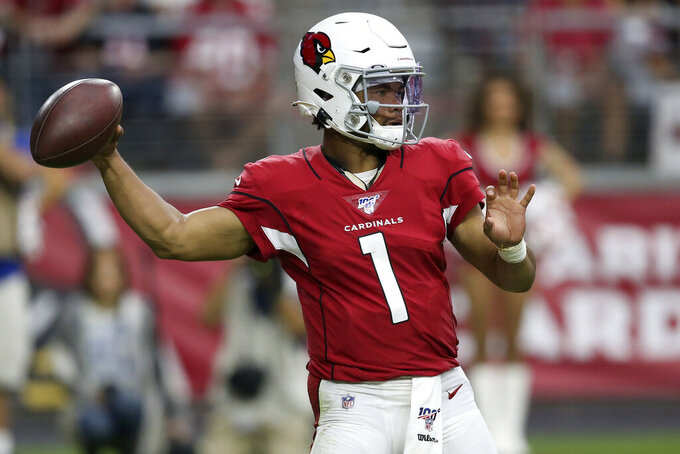 GLENDALE, Ariz. (AP) — It's a quarter of the way through the regular season and the Arizona Cardinals' new-look roster is still seeking its first win.

The season started with a 27-27 tie against the Detroit Lions, which was encouraging since the Cardinals climbed back from an 18-point deficit to earn the draw. But the frustration has mounted with losses to the Ravens, Panthers and Sunday's 27-10 setback to the Seattle Seahawks.

The game followed a familiar pattern. Arizona (0-3-1) had some good moments in the first half, but the offense couldn't find the end zone. Then a big mistake proved costly. Against the Seahawks, it was when rookie quarterback Kyler Murray tried to throw a screen pass to David Johnson. Instead, it was picked off by Jadeveon Clowney and he ran it back 27 yards for a touchdown.

By halftime, Seattle had a 20-3 lead. The Cardinals never threatened in the second half.

"You just have to play better," Fitzgerald said. "You can't spot good teams anything. You have to play well in all three phases consistently for 60 minutes to win in this league."

The Cardinals continue to get production from some of the oldest players in the league. Terrell Suggs, who is 36, had eight tackles on Sunday, including two tackles for a loss and 1½ sacks. Fitzgerald, also 36, caught five passes for 47 yards.

Fitzgerald has 1,326 career receptions, which ranks No. 2 in NFL history. He jumped ahead of Tony Gonzalez, who had 1,325 catches.

A lot of things. The main problem is the Cardinals can't do anything right consistently. Murray has made some bad decisions. The offensive line occasionally does a poor job protecting him. The defense will play well for a stretch but then give up big plays. There's also a knack for ill-timed penalties.

"We have to find a way to finish, and that's all of us — coach and players," first-year coach Kliff Kingsbury said. "Got to call better plays and execute at a higher level."

Johnson. The 2016 All-Pro was a big part of the offense on Sunday, especially in the passing game. He caught eight passes for 99 yards, including one reception for 31 yards.

Murray. Don't worry, he's still very good. But the No. 1 overall pick is struggling with the mental aspect of the game. In a silver lining from Sunday, he did run for his first career touchdown when he scored from 9 yards out in the fourth quarter.

Kicker Zane Gonzalez also had a rough game on Sunday. He had made all nine of his field-goal attempts coming into the game, but missed 2 of 3 against the Seahawks. The misses came from 43 and 48 yards.

Kingsbury didn't have much of an update on WR Christian Kirk (ankle), who got his right leg caught underneath a defensive player on the next-to-last play of the game. DL Zach Allen (shoulder) also left Sunday's game. The coach said he'd know more about both on Wednesday.

6 — The Cardinals have had trouble defending tight ends this season and Sunday's loss was no exception. Will Dissly was Seattle's leading receiver with seven catches for 57 yards and a touchdown. It was the sixth touchdown caught by an opposing tight end this season.

The Cardinals aren't completely hopeless, but they've been erratic and haven't pulled off many explosive plays on offense or defense. Arizona didn't force any turnovers against the Seahawks.

"These self-inflicted things are things that are correctable," Kingsbury said. "We've been competitive in games, just haven't executed at a high enough level at crucial times. That, to me, is fixable and we just have to fix it."

By Julie Watson 7 hrs ago
By Dennis Waszak Jr. 11 hrs ago
By Tom Withers 12 hrs ago
By Kristie Rieken 15 hrs ago
By Steven Wine 16 hrs ago