Jets' Bell eager for contact, wants teammates to hit him 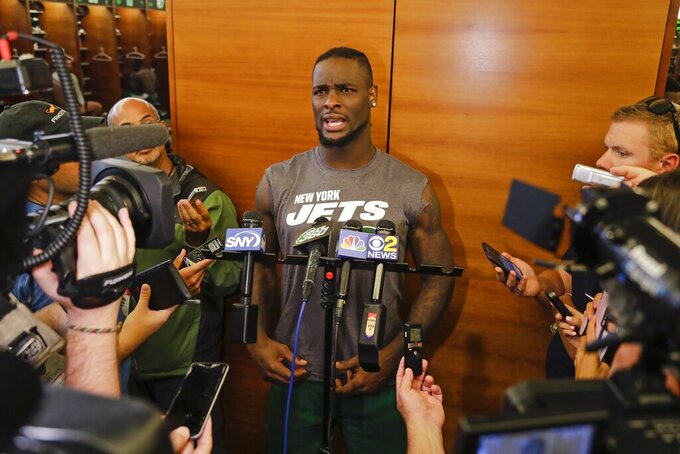 Nothing too hard or violent, but just enough for him to feel it.

The New York Jets running back isn't playing during the preseason, so he's doing whatever he can to be ready for football when the regular season starts.

"Give me a little something," he tells some of the veterans on defense. "Go for the ball, things like that, just so I can get prepared."

Bell hasn't played in a game in nearly 20 months, a lengthy layoff as a result of his contract dispute with Pittsburgh. He sat out last season, signed with New York in March and is being held out of preseason games as a precaution.

The three-time Pro Bowl pick has been getting plenty of action in practice, though. And he feels ready to go.

But just to be sure, he goes up to guys such as nose tackle Steve McLendon, linebacker C.J. Mosley and safety Jamal Adams and asks them to get physical. He knows they might be wary, not wanting to injure him — so he'll try to make them angry by running harder, so they'll give him a pop.

"I try to do that intentionally just so I can feel it," Bell said. "And, a lot of times you'll start seeing guys a little frustrated and they'll try to hit me back and that's what I need. They won't take me to the ground, they're not really going for my legs. Hitting me up top, things like that, I need all that."

Coach Adam Gase understands how important Bell is to his offense, giving quarterback Sam Darnold a versatile playmaker out of the backfield.

And from where Gase is watching, he sees a guy who is ready to play.

"It's his body demeanor and the way he's attacking the defense," Gase said. "Those guys know the difference between how a guy is going to (practice). Either we're thudding up and they're wrapping up and then when they see him start getting lower and accelerating toward them, they know, OK, he's looking to do some damage here."

The Jets have increased Bell's workload in practices the past couple of weeks, and he has been running well.

Still, the running back knows the real test won't come until he touches the ball for the first time against Buffalo on Sept. 8.

"Obviously, it's still practice," Bell said. "I know once I get to the game it's going to be a little different. But that's something I'll adjust to. I've been playing football my whole life."

Bell has been talking to Gase all summer about the plan for how he'll be used in practice and in preseason games. Gase announced last weekend that Bell will be held out of games until the regular season, a scenario with which the running back says he's "completely fine."

"It's going to come," he said. "I don't think four plays of the preseason is going to help me for Week 1 in the game."

That doesn't mean Bell isn't itching to get on the field.

"I really hate watching Sam play," Bell said with a smile. "I just want to be in there with him because I know how special he is and I want to play with that.

"Obviously, I know everybody's eager to watch me play. I'm eager to play."

That's evident in the way Bell has prepared for the first two preseason games, dressing in full uniform despite knowing he won't see the field.

"Yeah, he's out there in pregame with the pads on and dancing around and he's like, 'Let's go, guys! Come on! Get fired up!'" Darnold said with a big grin. "I'm like, 'Bro, you're not even playing. Once you start playing, you can start doing that stuff.' Nah, he's been great."

Bell acknowledged that this year's season opener will be different from any he experienced during his previous stint with the Steelers.

He knows all eyes will be on him — including those of his coaches and teammates.

"I'm excited that when we get the opportunity and it's go-time for him, I can't wait to see what he does on a Sunday," Gase said. "Watching him in practice, that's fun enough. You can tell the guy is a special player and to see him on Sunday, that's going to be fun."