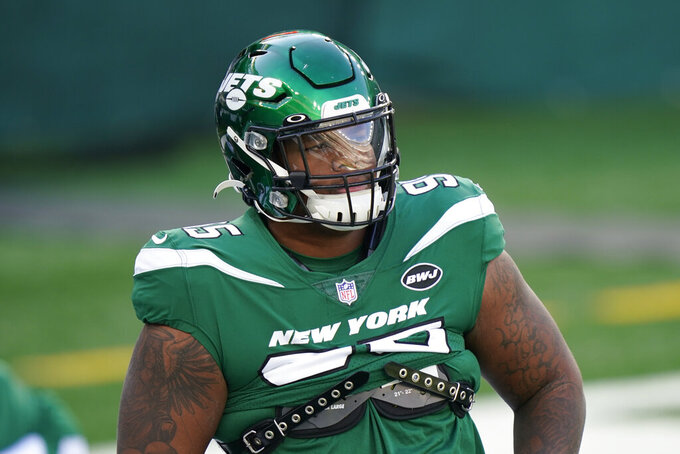 The New York Jets placed the much-improved defensive lineman on injured reserve Wednesday. Williams was dealing with a concussion and a neck injury, both suffered in the team's first victory of the season last Sunday at Los Angeles against the Rams.

“I don't know exactly,” coach Adam Gase said when asked earlier Wednesday about the nature of Williams' neck ailment. “I just know that it's probably going to keep him out the rest of the year.”

Gase said Williams would need to clear the concussion protocol before the team officially placed him on IR.

Williams has a team-leading seven sacks, 14 quarterback hits and 10 tackles for loss while rating as one of the NFL's top defensive linemen this season. The No. 3 overall draft pick last year has 55 total tackles, two forced fumbles and three passes defensed.

That came after an up-and-down rookie season during which Williams played through an ankle injury.

“He's done a good job, obviously,” Gase said. "I felt like he had a good run of games. I felt like his consistency was pretty good. There were a few games where he kind of disappeared, but it didn't happen a lot. Last year, there would be a couple of games in a row where you didn't really feel him.

“But this year, a high majority of the games, you felt him. If you were on the other team, you felt him, whether you were playing quarterback or in the run game.”

Before leaving against the Rams, Williams had four tackles, a sack, a tackle for loss and a quarterback hit.

“Sunday, you saw what kind of impact that he had,” Gase said, “made a ton of TFLs, was in the backfield, created pressure.”

Williams could be replaced for the final two games of the season by a combination John Franklin-Myers, Trevon Coley and rookie Jabari Zuniga. The Jets also have Tanzel Smart, who has been active for two games, on the practice squad.

In other injury news, backup cornerback Javelin Guidry (knee) did not practice.

The 1-13 Jets will be a bit short-handed at inside linebacker Sunday against the 10-4 Cleveland Browns after Harvey Langi was placed on IR with a neck injury. Langi had started the last six games opposite Neville Hewitt after Avery Williamson was traded to Pittsburgh and provided some playmaking spark on New York's defense.

Bryce Hager is the only other inside linebacker listed on the active roster. Noah Dawkins, Sharif Finch and Brady Sheldon are also on the practice squad and have experience at the position.

NOTES: TE Ryan Griffin was placed on the reserve/COVID-19 list, likely keeping him out of Sunday's game. Griffin is the second Jets player in as many weeks to be placed on the list after defensive lineman Folorunso Fatukasi missed New York’s win over the Los Angeles Rams last Sunday when he was deemed a close contact of someone outside the organization who tested positive. Fatukasi was activated from the list Tuesday and will be available to play against the Browns.