McCoy, Gore get Bills off and running to open training camp 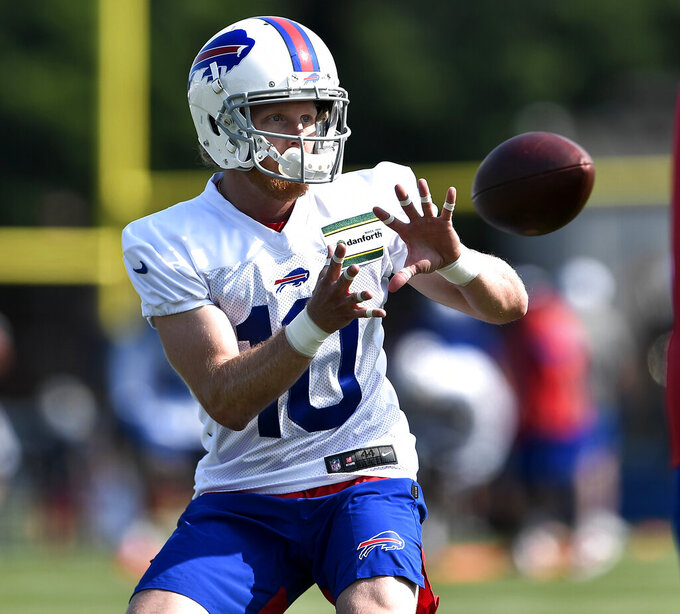 PITTSFORD, N.Y. (AP) — The NFL's oldest offensive backfield tandem got off to a running start once the Buffalo Bills opened training camp Thursday.

At 36, Frank Gore refused to let what he called a "cramping" issue prevent him from taking part. Gore was activated off the non-football injury list upon passing his physical a few hours before practice.

"I had to," said the 15-year veteran, who signed a one-year contract with Buffalo in March. "My first year here, I wanted to be out there with my team to show them how much I do care about this team and helping this team be successful."

As for LeSean McCoy, the just-turned 31-year-old let his legs do the talking amid questions of him losing a step coming off his least productive season . Working with the starting offense, McCoy reeled off a number of impressive runs both up the middle and around the edges during the no-contact session in which players went without pads.

Though McCoy declined to speak to reporters following practice, general manager Brandon Beane cleared up whatever doubts there might be regarding the running back's status on the team.

Asked about the "outside noise" revolving around McCoy, Beane said "there's not any inside noise," and chalked the rumors up to media having nothing to report with the Bills off since mid-June.

"When Sean and Brian Daboll roll the ball out, LeSean's going to be the first running back to touch the ball," Beane said, referring to coach Sean McDermott and Daboll, the offensive coordinator. "That's the way we see it."

It made no difference to Beane that McCoy's 514 yards rushing and 752 yards from scrimmage were career lows for the 11-year veteran; or that he's set to make a $6.175 million base salary in the final year of his contract; or that Buffalo expanded its stable of running backs by signing TJ Yeldon in free agency and used a third-round pick to draft Devin Singletary.

"He's handled the challenge all through the spring," Beane said. "I think he sees the competition. He hasn't shown that he's afraid of it or has a problem with it. So that's where that sits."

Gore got a firsthand glimpse at how driven McCoy (also known as 'Shady') is after the two continued their tradition of spending the offseason working out together in Florida.

"Every year as a back you've got individual goals and when you don't hit them, you should be upset," Gore said. "And me knowing 'Shady' for a while, he's very motivated this year. ... He's going to compete. He'll be on top of his game."

The Bills could use the push given how their once-dominant running attack went from leading the league in both 2015 and '16 to dropping to ninth last year. And much of the reason Buffalo still finished in the top 10 was Josh Allen setting the single-season franchise record for quarterbacks with a team-leading 631 yards rushing — or 117 more than McCoy.

Aside from the running game, the entire offense is under the microscope entering training camp after undergoing a massive offseason overhaul.

Buffalo upgraded a young and untested group of receivers by adding speedster John Brown and slot receiver Cole Beasley in free agency. And Buffalo placed a large emphasis on retooling what had been a patchwork offensive line by signing six free agents, including center Mitch Morse, and selecting tackle Cody Ford in the second round.

Identifying a starting lineup and getting it to jell on offense is one of the Bills' most pressing needs before the start of the season.

"That is one of our challenges right now is the lack of continuity on the offensive side. And we understand that," McDermott said. "We'd like to find it as quickly as possible."

NOTES: McCoy is scheduled to speak to reporters this weekend. ... Buffalo opened camp with four new starters on the line, including Ford at right tackle. Left tackle Dion Dawkins was the only returning starter to retain his spot. ... The Bills have only nine more sessions at camp before opening the preseason hosting Indianapolis in two weeks. Buffalo then travels to Carolina to hold joint practices with the Panthers before playing them in a preseason game on Aug. 16.