NFL, Oakley come up with face shields to protect players 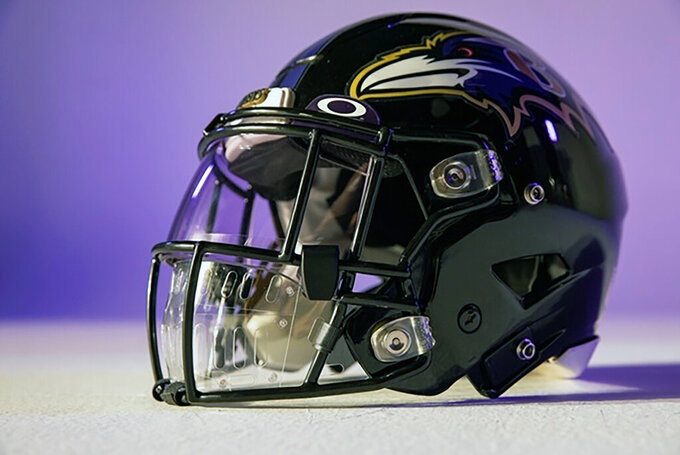 This photo provided by Oakley shows a new face shield designed by Oakley. With NFL training camps set to start at the end of the month, the league believes it is closer to one answer when it comes to player safety in the midst of the coronavirus pandemic. Face shields for the players' helmets. (Oakley via AP)

NEW YORK (AP) — With NFL training camps set to start at the end of the month, the league believes it is closer to one answer when it comes to player safety amid the coronavirus pandemic: face shields for the players' helmets.

The NFL and the players' union agreed to several protocols in a 42-page document last week, including team travel, media and treatment response. They have also updated the facilities protocol, specifically addressing training camp, using recommendations from a joint committee of doctors, trainers and strength coaches.

However, the two sides haven’t agreed on testing and screening protocols for the coronavirus.

One idea suggested by the union’s medical director, Dr. Thom Mayer, to help control the spread of the virus was to have players wear face masks. The league’s engineers and a sports equipment company tested prototypes for the masks, but players shot it down.

“We’ve had a real robust discussion around it that stretches back a number of months,” said Dr. Allen Sills, the league’s chief medical officer. “From the start, the NFL Players Association, their medical advisers, their engineers have been engaged with us. We’ve also had dialogue with players along the way trying to look at early prototypes and developments.”

The face shield was designed by Oakley, which already provides visors for the players.

The face shield has received a better response than the mask suggestion.

“The player feedback was integral in coming up with this design," said Dr. Jeff Crandall, chairman of the NFL’s Engineering Committee. "They (Oakley) would start with this design and say: ‘Do you like this one better or this one? How’s your field of view on this one?’

“At the end, they did have feedback from players. This was their choice for the players they’ve evaluated so far. I think each player is going to have an evaluation for themselves in terms of exactly how they favor one concept versus another.”

Crandall said Oakley came up with the design.

“Clear plastic with slits or holes in it that block any direct path of a droplet, but do promote air flow, communication, soundwaves,” he said.

“They had a visor that covers the eyes. What could we do to cover the mouth and nose area?” Crandall added. “So they came up with a mouth shield that tried to keep the field of view as much as possible; you don’t want to block the lower part. You want to promote breathing and not a sense of restriction. You want to maximize comfort.

“Prevention from touching the face was also a consideration, and obviously the biggest consideration was how can you mitigate the exchange of droplets," he said.

Sills noted the shield was designed to deal with how the virus spreads.

“Just like any face shield or facemask for that matter, you’re thinking about the aerosolization of droplets and the spread of it via that mechanism, which is starting to be recognized as the more important mode of transmission."

Given sports' shutdown in March because of COVID-19, this will be the first season that NFL players try to get ready on the field after conducting minicamps virtually during the offseason.

“We often say physical distance and football don’t go together, pretty impossible to keep 6 feet apart on the field, so that causes you to look for other innovations which could possibly be a flag bearer, and we think this falls into that category," Sills said.

With training camps scheduled to start in a couple of weeks, there's still no timeline for the helmets with face shields to make their debut.

“We’re actively working with players even this coming week looking at prototypes, so we will love to have them rolled out by the time we start," Sills said. “Obviously we won’t be starting helmeted activities right when training camp starts, that’s a little bit of a down-the-road thing. We would love to get them on board from the get-go.”