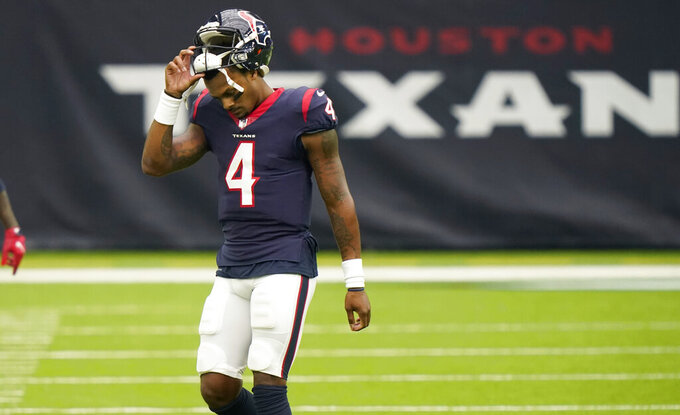 Houston Texans quarterback Deshaun Watson (4) walks off of the field during the first half of an NFL football game against the Minnesota Vikings, Sunday, Oct. 4, 2020, in Houston. (AP Photo/David J. Phillip)

HOUSTON (AP) — As it turns out, the curious decision to trade star receiver DeAndre Hopkins in the offseason was the beginning of the end for Houston Texans coach and general manager Bill O'Brien.

Running back David Johnson, acquired from Arizona along with draft picks in exchange for Hopkins, has struggled for the Texans, who are off to their first 0-4 start since 2008.

Houston's run defense has regressed, too, and suddenly a team coming off consecutive AFC South titles is searching for answers.

Owner Cal McNair decided Monday he had seen enough from O'Brien and fired him. O'Brien was in his seventh season as coach and assumed the duties of general manager in the offseason. He quickly put pressure on himself with the Hopkins trade. Then the losses started to pile up, and O'Brien became the first NFL coach this season to lose his job.

Assistant head coach Romeo Crennel will be the interim coach for the remainder of the season.

Crennel had been Houston's defensive coordinator but stepped away from that role this year. Among his most pressing tasks will be to shore up the Texans' NFL-worst run defense.

Last year, the Texans allowed 121 yards per game on the ground — 25th in the league. This year they're giving up nearly 182 yards, worst in the NFL.

The unit hasn't changed much from a year ago. The one big loss was nose tackle D.J. Reader, who signed with the Bengals after starting 30 of 32 games over the last two seasons. Anthony Weaver was promoted to defensive coordinator after serving as the defensive line coach. But he didn't make any changes to Crennel's scheme that would account for such a dramatic downturn.

Now at 73, Crennel moves back into the spotlight. He will be the oldest person to serve as a head coach in a game in NFL history, passing Hall of Famer George Halas, who was 72 in his last game in 1967.

Star defensive end J.J. Watt seemed stunned on Sunday after the Texans lost at home to Minnesota. He bristled when a reporter mentioned that the Texans gave up 162 yards rushing and read off all the long drives the Vikings put together.

“It’s not good. Not going to win you many football games with numbers like that,” Watt said. “We have to fix it. We’re 0-4. What we are doing is not working. It needs to be fixed.”

As for how to do that, Watt had no answers.

“If I had them, I would do it,” he said. “I’m not saying that your question is a bad one, I’m just saying if I knew the answer, I would implement that answer.”

Now it's up to Crennel to find a solution.

As for the offense, Houston's rushing attack is also in the NFL cellar, averaging 73.5 yards per game. That contributed to a poor showing in the red zone against the previously winless Vikings. Houston failed to score a touchdown in three trips inside Minnesota's 20.

“We’ve just got to beat the guy across from us and find a way to get it in the end zone,” receiver Will Fuller said. “I don’t know the statistics, but I know we were kicking field goals (Sunday), and that’s not going to get you a win.”

Deshaun Watson and Houston’s passing game had their best performance of the season on Sunday. Watson threw for a season-high 300 yards and two touchdowns and didn’t throw an interception after being picked off once in each of the first three games.

He was able to complete several deep throws on Sunday after the Texans struggled to get chunk plays in their first three losses. The Texans had four receptions of more than 23 yards, highlighted by a 43-yard catch by Fuller.

Hard work and discipline are required to solve Houston's problems against the run, Watt said.

Fuller had 108 yards receiving and a touchdown on Sunday. It’s the second 100-yard receiving game this year for Fuller, who had 112 yards in the opener but managed just 54 yards combined in his previous two games.

Johnson had 63 yards rushing on Sunday. He had a chance to score from the 1-yard line on Houston's last drive but was stuffed for no gain.

Tight end Jordan Akins sustained a concussion on a helmet-to-helmet hit by Harrison Smith on Sunday that got Smith ejected from the game.

0 — The Texans are the only team in the league that hasn’t forced a turnover this season.

Houston begins division play on Sunday when it hosts the Jacksonville Jaguars (1-3) and a defense that's allowed nearly 400 yards and more than 29 points per game. It could be a good opportunity for Crennel to begin his interim tenure with a win.