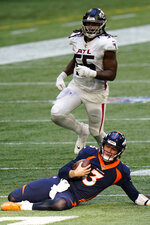 ATLANTA (AP) — Little by little, the Atlanta Falcons are learning how to win while still leaving room for too much late-game drama.

Matt Ryan took advantage of Denver's thin secondary to throw three touchdown passes and the Falcons turned back Drew Lock's bid for a second consecutive comeback to beat the Broncos 34-27 on Sunday.

Ryan completed 25 of 35 passes for 284 yards with one interception. Atlanta (3-6) improved to 3-1 under interim coach Raheem Morris — a big boost for a team that saw coach Dan Quinn and general manager Thomas Dimitroff fired after an 0-5 start.

The Broncos' fourth-quarter comeback attempt gave Ryan and the Falcons a scary reminder of blown leads this season.

Lock threw two touchdown passes and ran for a 10-yard score in the final quarter that made it 34-27.

“I’ll never admit to it not being our day on offense because of how confident I am in our guys,” Lock said. “It’s got to be something. We’re going to go back and watch it, brainstorm and figure it out.”

One week after throwing three fourth-quarter touchdown passes to lead Denver to a 31-30 comeback win over the Chargers, Lock tried to spark another rally.

With Atlanta leading 27-6, Lock threw a 20-yard scoring pass to Jerry Jeudy early in the fourth quarter, On Denver's next possession, Lock was under pressure from Grady Jarrett when he overthrew Jeudy and was intercepted by Ricardo Allen, who returned the ball 20 yards to the Denver 12.

The Broncos took the ball at their 20 with 44 seconds remaining and no timeouts, needing a touchdown to tie.

“I wasn’t nervous at all,” Morris said before adding with a laugh, “good thing I had that mask on.”

“We have to be better in the first three quarters,” Lock said.

Lock completed 25 of 48 passes for 313 yards with two touchdowns and one interception. Denver lacked an effective running game to help the quarterback. Phillip Lindsay had eight carries for 23 yards.

The Falcons scored on their first four possessions, thriving on Ryan’s ability to find holes in the Broncos’ depleted secondary. Denver’s starting cornerbacks, A.J. Bouye (concussion) and Bryce Callahan (ankle) were held out.

Atlanta converted six of seven third downs in the first half. The Falcons showed off their depth at wide receiver, overcoming the absence of Calvin Ridley, who was held out with a mid-foot sprain. Olamide Zaccheaus and Brandon Powell had touchdown catches to complement Julio Jones, who also had a scoring catch.

“It kind of feels good with back-to-back wins for the first time this season,” said Todd Gurley, who ran for 53 yards. “I’m just happy, man. Happy for everybody. We get to be excited.”

Even after not practicing all week, Ridley tried to talk his way into the game during pregame warmups. He injured his left foot in Atlanta's win at Carolina on Oct. 29.

“He was in my ear pregame,” Morris said. “He’s always going to want to play. Sometimes you have to protect guys from themselves and that’s what we did today with him.”

Lock didn't regret trying to connect with Jeudy on the pass that was intercepted by Allen.

Zaccheaus beat Davontae Harris for a 51-yard touchdown catch in the first quarter. Zaccheaus made the catch for his first touchdown of the season even though Harris was called for pass interference on the play.

Zaccheaus added a 42-yard catch in the second quarter to set up Ryan’s 9-yard scoring pass to Powell. It was the first career touchdown for Powell, Atlanta’s top return specialist.

Broncos: TE Albert Okwuegbunam left with a knee injury late in the third quarter and did not return ... TE Noah Fant limped off the field with an ankle injury following a 32-yard catch on Denver's first possession. After being listed as questionable, Fant returned in the second quarter. OT Demar Dotson also returned in the first half after leaving with a hip injury.

Broncos: Denver will make its first visit to Las Vegas next Sunday.

Falcons: Following their bye, the Falcons play at New Orleans on Nov. 22.