Saints glad Sanders is on their side in rematch with 49ers 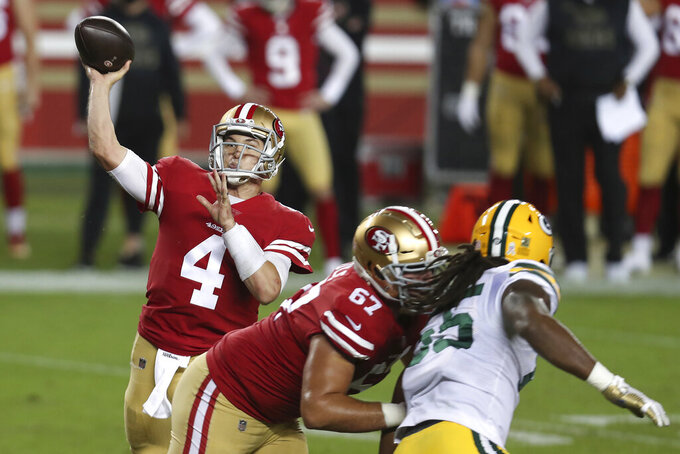 NEW ORLEANS (AP) — With a slew of big plays including touchdowns receiving and throwing, Emmanuel Sanders was a big reason the San Francisco 49ers pulled out a 48-46 shootout against the Saints in the Superdome less than one year ago.

“I’m always going to remember that game,” Sanders said. “That game was probably the greatest game I’ve played in. Obviously, I’ve played in Super Bowls and whatever. But just from an offensive, play-calling standpoint of two coaches going at it like it’s (the) Madden (video game), it was unbelievable to be a part of and to watch.”

Now Sanders is on the other side of the rematch on the same field, which would seem fortunate for him, given how both teams’ 2020 seasons have gone so far.

The 49ers (4-5) have been plagued by injuries and have an uphill climb to return to the playoffs only one season after advancing all the way to the Super Bowl.

The Saints (6-2) have won five straight — the latest a 38-3 demolition of Tampa Bay — and sit atop the NFC South as they aim to win the division a fourth straight year.

Sanders has contributed to New Orleans’ success with 30 catches for 342 yards and three touchdowns in six games. And the Saints are glad they don’t have to defend him anymore, because last year, “He was a pain in the butt,” Saints coach Sean Payton said.

Sanders had seven catches for 157 yards receiving against New Orleans last December, including a 75-yard touchdown in which he fell backwards making a catch on a deep throw, quickly sprang to his feet and broke a tackle to get to the end zone. He also threw a 35-yard touchdown pass to Raheem Mostert after taking a toss on a reverse.

“He’s one of those real smart football guys,” Payton said. “He can track the ball down the field. Hopefully, we can find him some of those explosive plays as we move forward.”

San Francisco returns to the dome without two other stars from last year’s meeting who are now injured: quarterback Jimmy Garoppolo and tight end George Kittle.

The Niners also are dealing with injuries on defense, including to cornerback Richard Sherman and defensive end Nick Bosa, which won’t make stopping Sanders any easier.

“It’s going to be a huge challenge going against him, just knowing that what he did for us last year and obviously seeing what he’s done on tape this year,” Niners linebacker Fred Warner said.

Sanders confidence in the Saints’ chances is evident in his description of a text he described sending to 49ers receivers coach Wes Welker.

“I told him, ‘We’re about kick y’all (butt),'” Sanders recalled. “I want to kick their (butt) and then after the game we can hug it out.”

Incidentally, Sanders’ TD pass against New Orleans was the second of his NFL career. Perhaps another is in store before too long, given Payton’s penchant for drawing up creative plays.

“Yeah, we’ll see,” Sanders said. “We might have some tricks up our sleeve.”

Sanders won't be the only ex-Niner in Saints colors. Linebacker Kwon Alexander, acquired in a trade with San Francisco earlier this month, practiced with New Orleans for the first time this week and is on track to play on Sunday.

Alexander player for LSU and started his career NFL career in Tampa Bay, so the Saints were quite familiar with him when they acquired him. Saints QB Drew Brees describes Alexander as a “very explosive player,” and “real good athlete,” who has "great speed and key and diagnosis ability.”

The Niners will play their first game of the season in front of fans. They haven’t been allowed to have any at home games this season and played in front of empty stadiums in their first three road games. While the players are happy to get a better environment with about 6,000 ticketed fans permitted to attend, they won’t miss the din of a sellout crowd in the Superdome.

“Probably won’t be the same craziness that was last year in New Orleans," tackle Mike McGlinchey said. "From an offensive lineman standpoint, that is actually OK ... because it’s tough to block people when you have to look at the football the whole time to see if it was snapped.”

Warner has been one of the best in the league at his position when it comes to coverage. He could have a tough test this week if he has to match up against New Orleans back Alvin Kamara. Kamara is tied for third in the NFL with 60 catches this season and his 565 yards receiving are best on the Saints.

“He’s just such an exceptional athlete in terms of just his balance and footwork,” Warner said. “They use him in all different types of ways with catching the ball out of the backfield. Obviously, I think that’s what separates him from a lot of the guys in the league,"

With most of San Francisco’s top receivers sidelined last week by injuries or COVID-19 protocols, Richie James Jr. made the most of his opportunity. He had nine catches for 184 yards and a TD with three catches for at least 40 yards. The only other 49ers to have that many yards and a TD in a game since the merger are Jerry Rice (four times), Terrell Owens, George Kittle, John Taylor and Anquan Boldin.